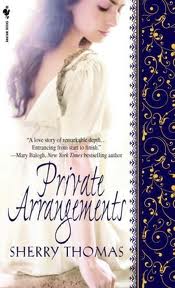 For the last post of my ReRead Rollout, I chose a very special book.

I am a huge Sherry Thomas fangirl. She is one of my absolute favourite writers, regardless of genre. She just has such a grasp of language and historical detail that lend her environments and characters a depth that most other historical writers just can't match.

But I just "didn't get" her debut novel. Everyone absolutely raved about this book when it came out - for its unconventional use of flashbacks, for its original characters, for its gorgeous language.

On my first read of this novel, I appreciated the skill that went into it, but I just couldn't emotionally connect with it. I didn't get it. I didn't dislike it, I just didn't love it.

One of my favourite personal anecdotes from my first RWA Conference was when I ran into Sherry Thomas at the Smart Bitches' Blogger Party, and exclaimed, "Oh I liked Private Arrangements!" because it was the first novel of hers that came to mind and the only novel of hers at that point that I'd read. To my mortification, she responded, "Really? Because your review said you didn't like it very much."

But a lot's changed since then. Not Quite a Husband, His At Night, Delicious and Beguiling the Beauty later, I'm totally hooked. So what better time to revisit her first book to see if my opinion's changed than during my ReRead Rollout?

I'm quite happy to say that it has. I think maybe the first time I read it, I was put off by the amount of detail, the delicious complexity she injected into her stories - a complexity that a lot of romances lack, to be honest. Perhaps because it was such a different tone from the vast majority of historicals. I was used to historicals with simplistic settings that went for the gut-punch of drama with Secret Mistresses and Tarnished Pasts and whatnot. Sherry Thomas, instead, includes the setting and the historical period and makes it all relevant to the story, rather than as a pretty backdrop.

Also, none of her protagonists are Angsty Islands whose only friends are Equally Angsty and often Sequel-Baiting chums - all of them have family members, friends, acquaintances, histories and complex connections to the outside world. I love that about her writing.

For this second read, I found I could dive into the complex marital tangle between Gigi and Camden more easily, now that I was used to (and highly addicted to) Sherry Thomas' writing style. I enjoyed so much more and remembered more about the characters this time around - how reluctant Gigi was to give up on her attachment to Freddie, because she'd come to fear the passion that made her abandon her morals as well as her good sense. How deep Camden was in denial, to the point where it took him nearly the entire book to realize he'd subconsciously started this whole mess (by demanding an heir) in order to win Gigi back from the start.

I adored how Sherry Thomas convincingly depicts both protagonists at two different stages of their lives - their heady passions and rages at 19 and 21, and their restrained but no less powerful feelings at 29 and 31. Although the flashback periods of the novel are clearly marked, the subtle differences in the characters' maturity levels also indicates which period of time the novel takes place in.

True, Not Quite a Husband remains my personal favourite of Thomas' novels, but now I can definitely agree that Private Arrangements deserves a place on my Keeper Shelf.
A
Posted by AnimeJune at Tuesday, January 01, 2013