"Harry Potter and the Philosopher's Stone," by J.K. Rowling 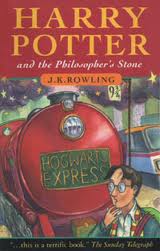 The Protagonist: Harry Potter. The mistreated nephew of Mr. and Mrs. Dursley, he sleeps in a cupboard under the stairs and wears nothing but cast-offs from his spoiled cousin Dudley, until he gets a mysterious letter in the mail inviting him to the magical school of Hogwarts.
His Angst: "Harry, yer a wizard." Also, everyone wants to kill him.

Dumbledore: The benevolent but mysterious headmaster of Hogwarts.

Snape: The Potions professor who holds a (possibly deadly?) grudge against Harry Potter.


The Word: I hadn't originally put this on the list for my ReRead rollout, but due to some carelessness on my part, when I went off to stay with my parents for the Christmas holidays, I packed only one book (the one I was currently reading - Ami McKay's The Birth House).

I normally never pack only one book, because I am absolutely paranoid about running out of books to read, regardless of where I am at the time.  I was a little self-conscious about how much I was already packing because I was staying with my parents for more than a week and I anticipated bringing quite a bit of additional stuff back home with me (which I will be, thanks Mum and Dad!).

So I only packed one book, which I finished about two days in. What to do, what to do? I then realized the bookshelf in my old bedroom still had the entire series of Harry Potter books on it, so what better book to add to my Rollout?

But does it hold up when one goes back to it? Well, once you've read the entire series, it's impossible to truly go back to the first book and repeat the experience of reading it for the very first time, before you knew why Sirius Black was so important or why Snape persisted in saving Harry's bacon despite obviously wanting to bang his mum.

However, as a first book, Harry Potter and the Philosopher's Stone (which is its real title, none of this dumbed-down Sorcerer's Stone bull crap), does such an excellent job of conveying a fully-realized, yet whimsically absurd world. Despite its brief length (at least compared to the gargantuan later books), Philosopher's Stone conveyed an environment, an atmosphere, a community of wizards and witches that instantly hooked me. While the story was certainly interesting, ultimately it was the worldbuilding that entertained me the most about this first book and kept me coming back for more.

The worldbuilding of Harry Potter succeeds because it's a perfect combination of fantasy and familiarity. It takes the whimsical aspects of wizardry and magical objects and mythical creatures and conveys it all through the familiar framework of a year at an English boarding school with houses, dorms, prefects and professorial politics. Rowling also imbues the story with an emotional honesty that transcends the fantasy setting. Harry falls into the world of wizardry not because of an innate curiosity for magic but because it is a world into which he is welcomed, for the first time in his life.

In this first book, he is still a little unsure of his place in this world, as indicated by his experience with the Mirror of Erised. In the mirror he sees himself surrounded by his biological family, and becomes obsessed with this impossible idea of what could have been. It takes Dumbledore to pull him free of the mirror's enchantment and show him the importance of friendships and bonds in the here and now. I've always seen this as a message to the book's readers as well. Harry's past and that of his parents and their allies is a horrific tragedy, and it's easy to wonder what kind of life Harry might have had if none of this had happened, but the point of the story is that there is no going back, there is only forward.

And forward it shall be. Having read the first book, I don't think I can just walk away without reading the entire series over again. Not all at once, mind - I'll still read other books on my TBR, but I'll alternate with more of Harry Potter's adventures.

Unsurprisingly, Harry Potter and the Philosopher's Stone merits an
A
Posted by AnimeJune at Sunday, December 30, 2012