"Anne of the Island," by Lucy Maud Montgomery 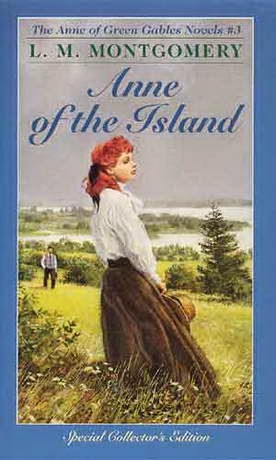 The Protagonist: Anne Shirley. Now 18, she's off to college to get her degree.
Her Angst: Everything is moving so fast - friends are marrying, dying, and having babies. Will Anne be able to hold onto anything, or should she welcome change?

Gilbert Blythe: Anne's childhood friend who's madly in love with her. But does Anne know how she feels?

Phillipa "Phil" Gordon: Another roommate, and new character, who prides herself on being a flighty flirt until she winds up falling for a minister.

Royal Gardner: A tall, dark, handsome and rich senior who falls for Anne and sweeps her off her feet. But is a wild, magical romance what Anne still wants?


The Word: In this third book in the beloved Anne of Green Gables series, our darling Anne is bound for Redmond College to obtain her BA in English (ENGLISH MAJORS REPRESENT!), and also grow up along the way.

Like the previous two novels, Anne of the Island is more of a collection of vignettes around a common time frame that correspond with an aspect of Anne's personal growth and development, rather than a novel with a specific plot. For the four years in which Anne studies for her degree, she's forced to confront some rather painful truths about herself as she learns to accept adulthood and all the changes that transition entails - like her best friend's marriage, changes to Avonlea, and the death of a childhood friend.

One of those changes involves Gilbert Blythe. Gilbert - now a paragon of Edwardian manhood as the brilliant, handsome, pre-med captain of the college football team - divulges his full romantic feelings to Anne in this novel. A horrified Anne shoots him down point-blank, partly because she's afraid of losing their easy childhood friendship and partly because she's not ready to identify her own growing feelings for him. Anne still clings to the ideas of romantic love she taught herself from her favourite novels, but her college experiences soon teach her how to accept reality without compromising imagination.

Anne also grows as a writer during her college years. She experiences the despair of rejection, the embarrassment of being thought a sellout (when her story's accepted as an advertisement for baking powder), and the frustration of a painfully true critique. Anne is prone to too much flowery description and Gary Stu/Mary Sue protagonists - a common flaw for budding writers regardless of time period, it seems.

Anne of the Island isn't a perfect novel. A few too many things happen coincidentally - Anne discovers her dream house is being let right when she's looking for a place to rent with her roommates, and poor Aunt Josephine dies and leaves Anne an inheritance at the precise moment Anne worries about tuition. But the novel is still so heartfelt and genuine and true about what college kids still go through. A consistently good entry in a wonderful series.
A
Posted by AnimeJune at Saturday, May 10, 2014