"The Girl You Left Behind," by Jojo Moyes 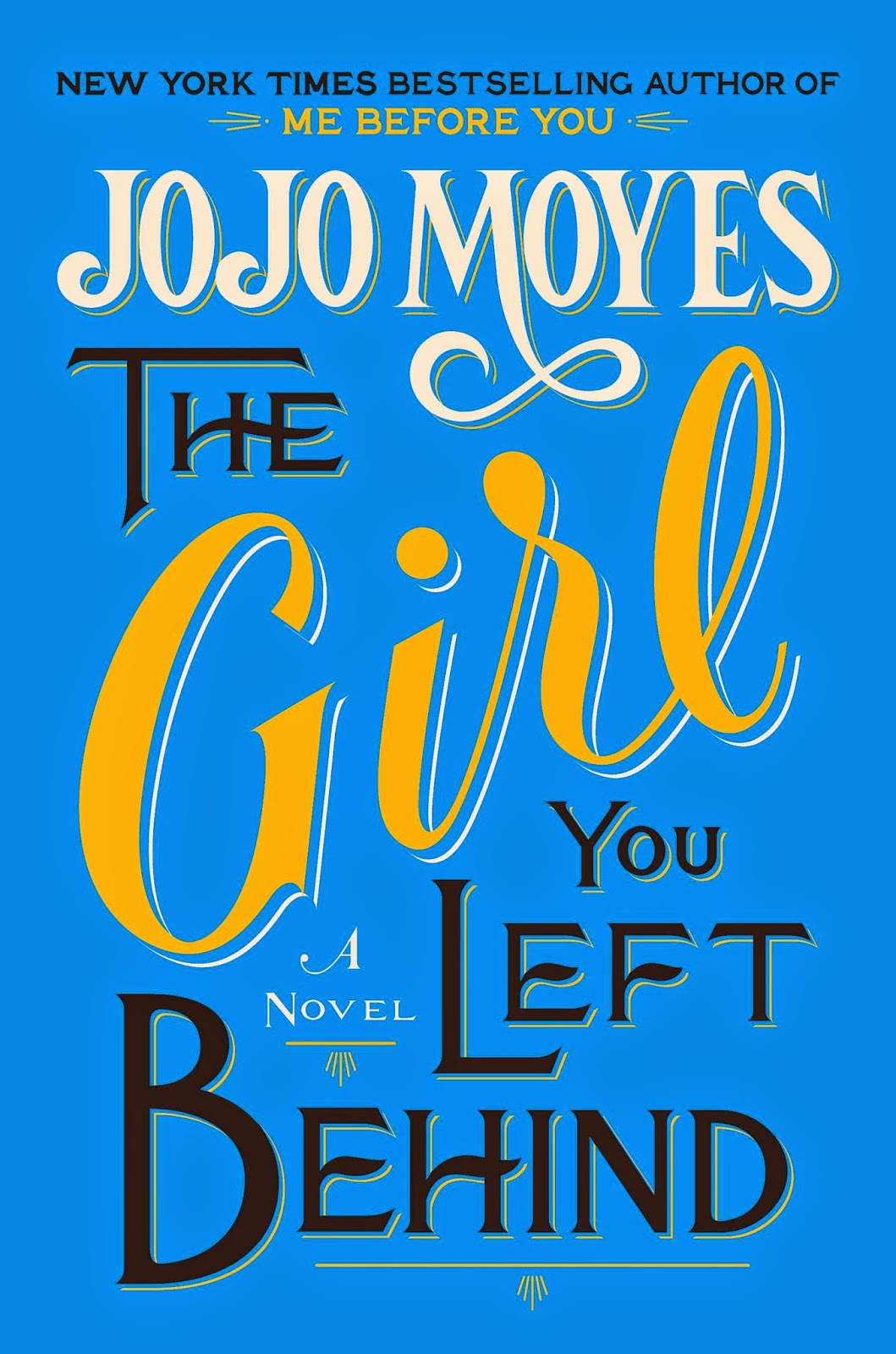 The Protagonist: Sophie Bessette. The owner of a little hotel called Le Coq Rouge in a small French town under German occupation in WWI.
Her Angst: Her artist husband's away at the front, and the only reminder of him is his portrait of her - a painting the local German  Kommandant covets.

The Other Protagonist: Liv Halston. A widow in 2006 still living in a grieving fog four years after the death of her husband.
Her Angst: The only reminder of him is a portrait he bought for her in Europe - a portrait she's being ordered to return for being looted in WWI.

The Word: How much is a painting really worth? Jojo Moyes, who blew me away with Me Before You, examines this in The Girl You Left Behind.

The title refers to the name of a portrait painted by Edouard Bessette, a minor student of Matisse who is away fighting during the Great War. His wife, Sophie, has not seen her husband for two years - two miserable years spent in a French village occupied by the Germans. Her only solace is The Girl You Left Behind, one of Edouard's portraits of her. Both the portrait and Sophie catch the attention of the Kommandant of her village. When Sophie learns that her husband has been sent to a horrific war camp, she decides to make the Kommandant a trade in exchange for her husband's safety.

Almost a hundred years later, in 2006, Liv Halston is living a similarly sad and narrow life. Mired in grief, drowning in debt, her life is devoted to preserving her deceased husband's house, even though she can no longer afford to live in it. She, like Sophie, takes comfort from The Girl You Left Behind, a beautiful painting of uncertain provenance that her husband bought for her during their honeymoon.

She manages to break from her comfort zone long enough to meet and fall for Paul, a shy but righteous ex-cop who works for a company that rescues looted works of art - until he sees The Girl You Left Behind on her bedroom wall and recognizes it as a painting thought to have been stolen by the Germans during WWI. Awkward. Now the artist's descendants are demanding the painting be returned, but Liv refuses. In order to save the only joyous thing she has left from her marriage, she sets out to discover what really happened to Sophie Bessette during the war.

The novel reminded me a bit of the film The Monuments Men, which argued that great works of art transcend war and time and the paltry label of "just paint on canvas." They are more then mere objects, mere possessions. Liv holds onto a lot of things in her life, to her social and emotional detriment. She still lives in her dead husband's enormous, empty, cold house. She still lives in her grief. She doesn't socialize and has few friends. Her attachment to her painting, however, is different, because it's not a cold object. It's a connection to life, and not just hers - Sophie's, too. Her search for evidence, any evidence, that the painting's transfer of ownership was legal draws her out of her own isolation and and into the mystery of Sophie's life, and the myriad things they have in common.

For Paul, he has to learn the hard way that morality rarely comes in black and white. He used to be proud of his work, returning stolen portraits to war victims and their descendants, and at first he cannot understand why Liv refuses to part with The Girl You Left Behind. What about the Bessettes and what they suffered? Shouldn't the situation be cut and dry? However, lately all the people he meets at his job are disaffected grandchildren eager to recover their family's paintings in order to sell them for the millions they're now worth.

Okay, I'll admit, this aspect of the novel bothered me. It's not like a few restitution-seekers (like the ones claiming The Girl You Left Behind) wind up being soulless philistines who only want a quick cash grab. Every restitution-seeker depicted in the book is depicted that way, to the point where I wondered if the author was trying to send a message condemning restitution in general.

The rest of the book is lovely. While not quite as heart-wrenching as Me Before You, the novel is filled with small, startlingly beautiful details - like when, in Sophie's time, the villagers bury their valuables to hide them from the Germans but are foiled when the clock beneath the rutabagas begins the chime the hour. Moyes has a deft hand with description and throw-away details of human absurdity.

The Girl You Left Behind tells a lovely story about how two women in different centuries can share the same experience thanks to a single piece of art. It's also a telling examination of when holding onto something is an act of bravery, and when it's an unhealthy act of desperation.
B