"Dreams of Gods and Monsters," by Laini Taylor 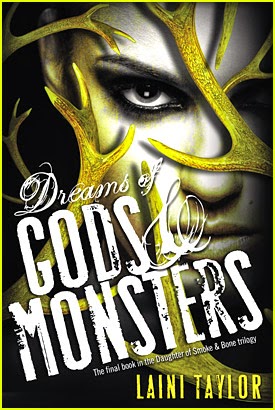 Karou: It's up to her to help the chimaera ally themselves with the exiled seraphim to bring peace to Eretz.

Akiva: He might be the only one with the experience and charisma to convince his fellow seraphim to rebel against the Empire - but can he convince Karou to forgive him?

Liraz: Akiva's angry, shamed sister, who believes she's too damaged by war to be any good in peacetime.

Ziri: A young chimaera who sacrifices his body to help impersonate Thiago to bring peace to his people.

Eliza: A human woman on the run from a mysterious heritage who's haunted by visions of angels and beasts.


The Word: I love candy, but in moderation. Eating too many turns the saliva in my mouth to acidic syrup, burning my tongue until I can't even really taste the sweetness anymore.

That's the reaction I had to Dreams of Gods and Monsters. The eagerly-awaited follow-up to Laini Taylor's endlessly inventive Daughter of Smoke and Bone and Days of Blood and Starlight taught me nothing so much as, this: Sorry Zuzana, but there is such a thing as too much cake.

Since the last book, Akiva and his Misbegotten seraphim brethren have fled the Empire to try and make an alliance with the remaining chimaera. To his surprise, Thiago, the notoriously violent chimaera general, is willing to put aside his people's hostility to consider an uneasy partnership.

Unbeknownst to Akiva - Thiago isn't exactly in his right mind. Or right body, I should say. Karou was forced to kill the general in the previous book when he tried to rape her, but she resurrected his body - with the soul of her dear friend, Ziri, inside. Karou and Ziri know the only way to keep the chimaera under control is to keep up the charade that their trusted general Thiago is still alive. But will the gentle-hearted Ziri be able to successfully impersonate the brutal White Wolf?

Meanwhile, Jael, Akiva's monstrous uncle who has assumed the mantle of Emperor, has travelled to Earth in order to exploit Judeo-Christian symbolism in order to acquire human weapons of mass destruction. If it looks like an angel, carries a harp like an angel, and speaks Latin - well, then let's hand over our nukes!

This all sounds fascinating, right? Unfortunately, Gods and Monsters is a chocolate cake with too much icing. The cake itself is delicious and dark and layered and creative, there's no doubt about it - but you have to wade through so much sticky, sugary angst prose to get to it that it's almost not worth it.

There is no reason for Gods ands Monsters to be 600 pages long. I've always liked Laini Taylor's gorgeous writing - when it's applied economically. Here, a single act of magic will take five pages to describe. There are pages and pages of repetitive angsty inner monologues from both Karou and Akiva about how Everything is Dark and Bleak and Hopeless. Why do difficult things, when complaining about how difficult things are to do is so much easier?

The novel is rather haphazardly paced as a result. Karou will waste paragraphs dithering about the precise mechanics of Akiva's smile and what it means For Their Future, but the Big Giant Bad Guys are dispatched with rather hilarious (and overly-convenient) swiftness. Oh, and there's the sudden, out-of-nowhere Extra Adventure tacked on at the end to gum up the narrative in the name of Plugging a Sequel Series.

This novel reads better when it's skimmed. Taylor's language is beautiful, but it's the application of the language that matters. I'm frankly disappointed that such a promising first novel would get bogged down by increasingly bloated, bleak, self-indulgent sequels.
B-
Posted by AnimeJune at Tuesday, May 20, 2014