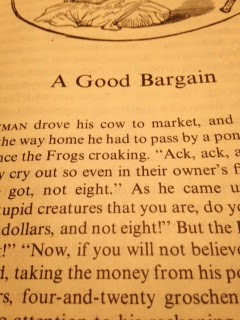 Sigh. So there's this anti-Semitic fairy tale, see? Where the villain is a cowardly Jewish moneylender who gets the shit kicked out of him for being a meddling dickhole. You'll notice I didn't include the illustration at the top of this story - it's because I've only just now realized, with an adult's eyes and understanding, what the picture of the man with the large nose and full beard getting whipped is meant to depict.

Blah, blah, "the period in which the story was set," blah blah STILL RACIST. So fuck this story. I'll tell it my way.

So there's this Countryman, see? And thanks to watching too many Disney movies and being more than a little psychotic and stupid, he accidentally loses a wad of cash after asking a bunch of frogs in a pond to count his money (by throwing the coins into the water) and opening a line of credit to a pack of dogs sniffing after his butchered beef. Long story short, frogs and dogs do not sing, dance, or pay their debts, and in a rage, the idiotic Countryman goes to the King to demand justice.

The King's daughter laughs herself silly at the Countryman's story, and since she's never laughed before, by law this means she has to marry the Countryman. Because Reasons. The Countryman turns her down flat since he's already married and it already sucks. Offended, the King offers the Countryman another reward - a reward of "five hundred," if he returns the following day.

Thinking he's getting 500 bucks the Countryman wastes no time in giving it away - he promises 200 to a city guard, and 300 to a ... um, uh ... random dude of indeterminate ethnic origins. Yeah.

Now, something quite different happens in the original fairy tale, but since the Brothers Grimm are being anti-semitic douchebags today - fuck their story. The Random Dude of Indeterminate Ethnic Origins takes his whipping stoically and promptly leaves the story (and the hillbilly kingdom of smelly, backwards, racist peasants) for greener pastures and much more lucrative and exciting adventures that may or may not involve punching a giant who bears a striking resemblance to Mel Gibson in the face.

By this point, the King is kind of amused by all this and offers the Countryman a real reward - he can go into the treasury and fill his pockets with all the gold his coat can hold. The Countryman pisses and moans some more because he's a moron, he narrowly avoids corporal punishment for a second time, and by this point I couldn't care less about what these people do because racism makes me tired.

Not Suitable For Children:

Points Added For:
Points Deducted For:
And the moral of the story is: don't give your money to animals, that's just stupid.

Rating: Zero Cultural Stereotypes Out of a Billion
Posted by AnimeJune at Wednesday, July 02, 2014