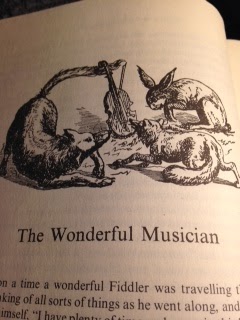 So there's this Musician, see? And he's farting around in a forest, lonely and bored, so he decides to play his fiddle to attract a companion.

He plays his fiddle, and an appreciative Wolf appears, asking if the Musician can teach him how to play the instrument.

Musician: "Um, you're not really my type." So the Musician tricks the musically-inclined wolf into trapping his paws beneath a rock, and the Musician continues on his way.

He plays a bitchin' song on his fiddle again, hoping for company, and a Fox appears, asking for musical training.

Musician: "Oh come on now. Seriously?" So the Musician ties the Fox to a bush and flees.

Because the Musician has no clear grasp of actions and consequences, he plays his fiddle in the woods again and is frustrated when a Hare appears. He subjects a third animal to non-consensual bondage and continues through the forest.

By this time, the Wolf has freed himself, and rescues both the Fox and the Hare while following the asshole Musician's trail.

Unfortunately, by the time the vengeful animals track down the Musician, his music has finally attracted a human companion - a woodcutter with an axe. The entranced Woodcutter chases the animals away, while the deluded, racist, jerk face Musician sidles off into the sunset.

Not Suitable for Children:
Points Added For:
Points Deducted For:

Rating: Two fiddle-playing mammals out of ten.
Posted by AnimeJune at Sunday, July 06, 2014