Once Upon a Blogger: "The Three Little Men in the Wood" 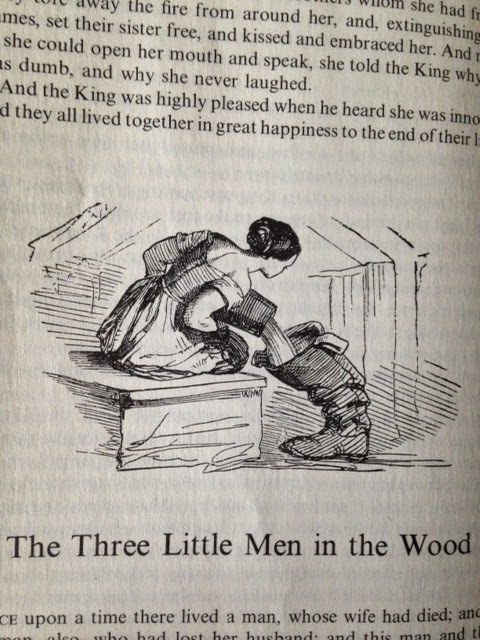 So there's this widower and this widow, see? Bonding over their shared experience of dead spouses, they decide to get hitched, with the widow promising to treat the widower's daughter even better than she treats her own.

You can just imagine how that turns out. The widower's daughter bathes in milk and drinks wine for about a day before her stepmother gets tired of being Not Evil and starts right in on the child abuse, while her own daughter remains free to bathe in and drink any bizarre combination of popular beverages she fancies.

Where is the widower in all of this? NOBODY CARES.

Anyway, during a blizzard, the stepmother gives her stepdaughter a paper cloak and crust of bread and orders her into the woods to fetch a basket of fresh strawberries.

Stepdaughter: "But why? They're not even in season--"

Stepmother: "Because I'm trying to kill you, obviously."

Stepdaughter: "Well, then. That makes sense."

The stepdaughter wanders off into the cold, because really, what choice does she have? She comes across a little house inhabited by three dwarves, and asks for shelter. After warming herself, she returns the favour by sharing her crust of bread with the dwarves and doing some housekeeping.

While's she's outside shovelling the walk, the three dwarves convene.

Dwarf #1: "Man, her life sucks, and she seems like a nice gal. I know! I'll make her grow more beautiful every day!"

Dwarf #2: "I'll make it so that gold drops out of her mouth every time she talks!"

As a bonus, the stepdaughter uncovers strawberries while shovelling the walk, and takes those back to the house.

Meanwhile, the Stepmother's real daughter becomes jealous, because she's ugly and hateful and smells of sour milk after a lifetime spent bathing in nonpasteurized dairy products. So she wanders into the woods herself looking for the same result, but when she finds the dwarves' house she acts like a spoiled little turd.

Dwarf #2: "Is it just me, or does she smell like bad cheese? I'll make it so that toads jump out of her mouth every time she talks!"

Dwarf #3: "I'll make it so that she dies a miserable death!"

So now the Stepmother has even more reasons to hate her stepdaughter, so she sends her stepdaughter ice fishing. Because if it doesn't kill her, she'll still be cold and bored for a few hours. Fortunately for the stepdaughter, a King wanders by and, intrigued by her superb ice-fishing skills, takes her home and marries her.

A few years later, after the young Queen's delivered of a fine baby Prince, her stepmother and stepsister decide to come visit, and the Queen lets them in for some unfathomable reason but quickly regrets it when the two women throw her out a window and into the river. The stepmother then puts her daughter in the Queen's bed instead, wrapping her up in a sheet.

King: "Why can't I see my wife? And why does the room smell like mayonnaise left out in the sun?"

Stepmother: "Every woman menstruates differently, my King. Some get cramps, some spontaneously belch out toads..."

Thankfully, the real Queen doesn't die - she turns into a duck (as one does). With much quacking and flapping of wings, she conveys her troubles to a servant, who fetches the King. The spell is quickly undone (I guess people turn into ducks all the time on that river), but what to do about the evil step-relatives and their incredibly short-sighted plan?

The King approaches the bedchamber and asks, "Hey, if I really wanted to punish someone, how would I do it?"

Fake Queen: "Ooh! I know! I know! Drive a bunch of nails into a barrel, then roll the criminal down a hill in it!"

Stepmother: "Oooh, you're so bad!"

Unfortunately for the step-schemers, that's exactly how they wind up punished. And the King and his Queen lived happily ever after.

Not Suitable for Children:
Points For:

Points Deducted For:
And the Moral of the Story is: Don't fuck with dwarves.

Rating: Two Helpful Dwarves out of Three.
Posted by AnimeJune at Monday, September 08, 2014