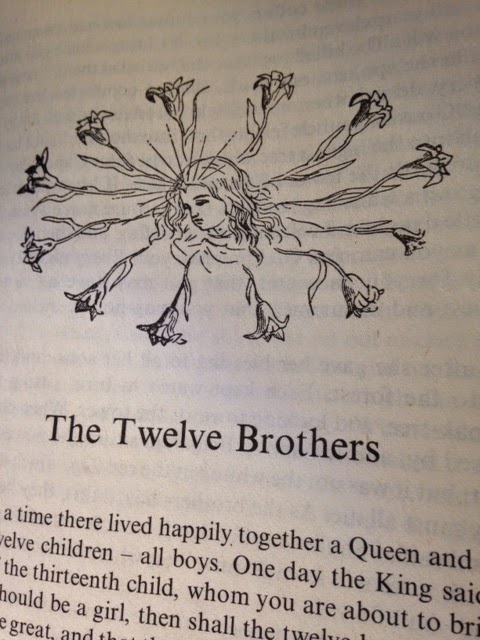 So there's this King and Queen, see? And they have twelve sons, with another bun in the oven waiting to bring it to a baker's dozen. However, the King's sick to death of boys at this point.

So he tells his Queen, "Let's just be honest - dudes suck. Sexism is real and with our society's outdated patriarchal norms, if we have a daughter, I'll have to murder our 12 sons and make her the sole heir just to even things out. It's only fair."

But by this point, the King's already fitted out a special room in the castle with twelve pre-built boy-sized coffins, just to prove he's serious, singing, "Who run the world? GIRLS! Who run this mutha? GIRLS!" under his breath.

To protect her sons, the Queen orders them to hide in the forest and wait for her to raise a flag on the day her baby is born. If it's a boy, she'll raise a white flag and they'll be able to return. If she has a girl, she'll raise an overly-symbolic red flag, and the boys'll have to run for the hills.

Prince #1: "We should totally murder any women we come across! Because they SUCK so much!"

12 Princes: "HUZZAH! This totally won't bite us in the ass later on!"

Ten years later, their sister the Princess figures out she used to have brothers (the room with the 12 empty coffins was kind of a giveaway) and goes into the woods to find them, eventually discovering her youngest brother (Benjamin) tending their cottage.

Benjamin: "OMG, and you don't suck!" Benjamin is overjoyed to re-discover his baby sister, and so are his 11 brothers - once he tricks them out of their Lady-Murdering pact. Because murder is terrible and everything, but breaking a pact is even worse!

So all the siblings live happily for a while in their cottage (and the Princess's parents never seem to notice she's missing, despite the fact that her dad was willing to butcher his other children in order to enlarge her inheritance), until the Princess fucks it all up because women suck. While in the garden outside the cottage, she spots 12 lilies and plucks them, hoping to make a tasteful centrepiece. However, the moment she does so, the house and garden disappear, and her brothers turn into crows.

Princess: "This is literally the first I've heard of this!"

Random Old Expository Woman: "If you remain perfectly silent and never laugh for 7 years, your brothers will be cured, but if you so much as chuckle before those seven years are up, they'll all die!" *vanishes in a puff of smoke*

So our faithful Princess zips her lips and holes up in a tree with some late-career Adam Sandler DVDs for five of those years, until a King and his hunting party pass by. The King falls in love with the Princess and marries her, and for the next two years is creepily happy with a wife who never talks or laughs. However, the Princess' mother-in-law is hella creeped out and nags her son about it so much he agrees to have his wife burned at the stake just to shut her up (women, am I right?)

Coincidentally, the seven years run out just as the Princess is being lit on fire, so her twelve brothers become human again in time to rescue her and for some reason the King is okay with not-burning her anymore and people live happily ever after for no reason.

Points Added For:
Points Deducted For:
And the moral of the story is: women ruin everything.

Rating: 7 unjustly exiled brothers out of 12.
Posted by AnimeJune at Wednesday, September 03, 2014