"The Game and the Governess," by Kate Noble 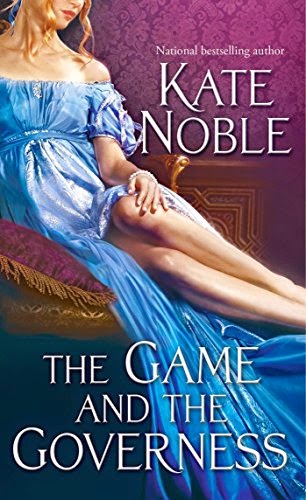 The Chick: Phoebe Baker. A former debutante forced into servitude when her father was swindled of his life savings by a con artist the Earl of Ashby refused to prosecute.
The Rub: Now she lives as a governess, in the very house where the Earl is visiting. Will her hatred rise up to consume her?
Dream Casting: Chloe Sevigny.

The Dude: Lucky Ned, Earl of Ashby. He thinks he has it all because he's an awesome person, but his best friend thinks it's because he's a privileged asshat. Naturally, he decides to make a wager at it, switching places with his secretary friend.
The Rub: Being a secretary is hard. Who knew?
Dream Casting: James McAvoy.

Ned: What?! Are you really saying the reason everyone loves me, caters to my every need, and waits on me is because I have money and power?

Phoebe: Despite my 5-year-long hatred of you and disgust for privileged aristocrats and the fact that you literally lied to me about everything, I inexplicably agree!

Phoebe: ...hmm, maybe it's because of all your money and power.


The Word: Okay, so I kind of fell off the Kate Noble fan wagon after the awful Follow My Lead. Revealed is still one of my favourite romances, but the rest of her novels never really lived up to the perfection of that one. However, I was quite intrigued by the plot of The Game and the Governess and thought I'd give her another try.

Lucky Ned, Earl of Ashby, has it all - he's one of the wealthiest men in the country, he's handsome, healthy, and a sure hand at cards. However, when his best friend/war buddy/secretary John Turner calls him on his privilege, Ned gets all butthurt. Turner, who has been pleading with Ned for years to lend him the money to help his family's mill, says the only reason Ned is "lucky" is because he's an earl. Ned, who's refused to lend Turner the money because ... mills are boring and working for a living is stupid, believes it's his naturally cheerful disposition that grants him Lady Luck's favour, and John has only his sourpuss personality to blame for his own misfortunes. Yeah.

Turner decides to turn it into a wager. The two are headed to a small English village neither has visited in decades to sell off Ned's mother's property. Turner proposes they switch places - Turner will pose as the earl, and Ned as the secretary - for two weeks, and in that time Ned has to win the romantic favour of a noble lady in spite of his "lowly" status. If Turner wins, Ned owes him 5000 pounds. If Ned wins, Turner loses his family mill. Yup - Ned's the hero of this novel.

They arrive at the house, and Ned's eye is caught by the whippet-thin, stern-faced governess of his host's children. Unbeknownst to him, this governess, Phoebe Baker, harbours a deep grudge against the Earl of Ashby. Years ago, Ned discovered his previous secretary was embezzling from him and he chose to cover it up rather than lose face, leaving the thief free to swindle Phoebe's father of his inheritance and drive him to suicide. Phoebe's reconciled herself to her reduced circumstances but she wants nothing to do with anyone associated with the Ashby house.

So, what was good about this novel? Noble does an excellent job examining privilege. Ned is an ass, and the narrative both acknowledges and commits to this and uses it to develop his character. Ned thinks the wager will be easy, he'll just use his abundant charm on the ladies, but his tried-and-tested moves blow up in his face - and the narrative doesn't only imply his earldom made womenfolk more receptive. It also suggests his high station could have scared women who would ordinarily have resisted his advances. I loved that aspect, and I loved that Ned had to really start thinking about consent and willingness and the enjoyment of his partners.

So what didn't I like? Pretty much everything else. Phoebe's an impractical Mary Sue who turns down an offer for five hundred pounds because she's become a "better person" in poverty than she was as a sheltered gentleman's daughter. Um, it's money - not a time machine. You're not magically going to turn back into a Terrible Person the moment you float above the poverty line. I also didn't buy her romance with Ned at all - it happens far too quickly, with almost no real development, and it skirts most of the thorny issues that ought to keep them apart.

More than anything, however, I hated this novel's pacing. Was it written under a really strict deadline? This novel reads like it was taken out of the oven fifteen minutes too early, still raw in the middle. The ending is laughably rushed - it introduces a murder plot that's barely solved a few pages later, we don't get to see anyone's reactions to Ned and Turner's switcharoo, and Phoebe overcomes her five-year-grudge and the horror of being lied to within the span of one page. Even more egregious, the secondary romance between Turner and a desperate countess, a romance that took up precious time that the primary romance sorely needed, turns out to be a ridiculously blatant cocktease for the sequel.

This novel is nothing but build up until a shoddy last-minute resolution.
C
Posted by AnimeJune at Thursday, October 02, 2014