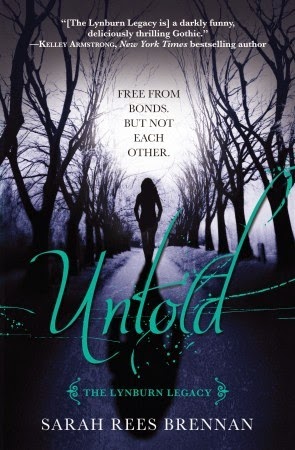 The Protagonist: Kami Glass. A budding investigative reporter whose sleuthing uncovered the fact that her town is full of resentful sorcerers waiting for a good excuse to come back into power.
Her Angst: She has no true idea who's a sorcerer and who's not, and no longer knows who to trust. On top of that, Jared is giving her the cold shoulder for breaking their magical bond.

Jared: An entitled, navel-gazing, self-absorbed whiny loser with low self-esteem who deals with this by being a dick to everyone. He's supposed to be attractive for some reason?

Ash: An entitled, navel-gazing, self-absorbed whiny loser with low self-esteem who nevertheless finds healthy ways to deal with his issues and other people. Why is he not the hero?

Angela: Kami's best friend who's coming to grips with her crush on Holly.

Holly: Friend to both Kami and Angela, who's struggling to come to grips with Angela's sexual orientation - and maybe her own?

Lillian: Ash's mum, Jared's aunt, and official Head Bitch In Charge of Sorry-in-the-Vale. Determined to hold on to her crown by any means necessary.

Rob: Ash's dad, Jared's uncle (?), who's determined to return sorcerers to power and make the humans of Sorry-in-the-Vale his rightful serfs.


The Word: I'd heard the hype about Unspoken, but I didn't truly get it until I opened the book and fell headfirst into a richly layered gothic fantasy that's serious, but not too serious to take itself too seriously. If that make sense. It used time-tested YA tropes, but in a fresh, self-aware way that made them entertaining instead of tiresome.

Needless to say, I was excited about the sequel. Untold picks up where Unspoken left off - that is, In A Very Bad Place. Kami's investigations from the previous novel uncovered the fact that the Lynburns are sorcerers and her town of Sorry-in-the-Vale is riddled with other magic-using families. Even worse, Rob Lynburn (Jared's uncle, Ash's father) had been secretly recruiting these local sorcerers in order to forcibly return the town to the Old Ways - the human-sacrifice kind.

So on top of coming to grips with the fact that people she's known her entire life are suddenly okay with murdering people, Kami has to stop Rob and his cronies from fulfilling their promise to sacrifice a human on the Winter Solstice to solidify their rule over the town. This means Kami and her friends have to team up with Lillian Lynburn, who stands in opposition to Rob - not because she opposes the murder of peasants, but because they are her peasants and that's rude. Yeah, Lillian's the worst.

I did enjoy this book, really, but it does suffer from a pretty severe case of middle-book-itis. It's heavy on character development, and really, really light on plot. The book layers on the description and the internal monologuing and the angst, but most of the novel is just a countdown to the Solstice.

Oh, and angsty tantrums from Jared. So many angsty tantrums. I put up with Jared in the previous novel because Kami was such a strong character and didn't put up with his pressuring. At the end of the previous novel, Kami actually severed their magical bond because she was (rightly) terrified about what it was doing to her emotional health and independence. Well, that action sends Jared spiralling into an insufferable, whiny, self-loathing angst-spiral for the rest of this damn book and I just couldn't stand him. He spends a good 70% of the novel being a total asshole to people who care about him while crying that "nobody wuvs me, I am so dark and unwuvable and broken, I cannot handle the feels!"

GET OVER YOURSELF, JARED.

The novel beats the dead horse that is Jared's Tortured Feels over and over, but at least other characters (like Ash and Holly) also get some spectacular development. Untold spends time examining the pieces on this particular chessboard rather than making any significant plays, but thankfully (most of) the characters (who are not named Jared) are interesting and multifaceted enough to hold my attention.

Yeah, it's a middle book, but it keeps a firm enough hold on the reigns to keep me excited for the final novel.
B
Posted by AnimeJune at Sunday, October 19, 2014

Labels: B Reviews, Fantasy, YA