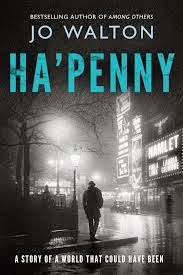 The Corpse: Lauria Gilmore, a prominent actress who inconveniently explodes right after landing a part in a controversial retelling of Hamlet.

Viola Lark: A talented actress who's coerced into completing the mission Lauria started before she got blown to high heaven.

Inspector Peter Carmichael: A depressed inspector who's not sure how many more cases he can solve for superiors who hold his darkest secrets over his head.

Lady Russell, a.k.a. "Siddy": Viola's Communist sister who may have gotten herself in too deep.

Jack: Inspector Carmichael's lover who resents having to hide their relationship, even as he understands why they have to.

The Word: I don't normally read sequels right after their original books. I like to give myself time to read other things and keep from burning out on (or through!) an author's novels too quickly. However, after reading and raving about Farthing to my family members, both my mother and grandmother started racing through the books so I took on the second book in order to keep up with the discussion.

Ha'Penny takes place only a few months after the events of Farthing. Normanby is now Prime Minister thanks to his murderous machinations in the previous novel, and he's already started to exploit the fears of the populace in order to bring fascism into England. And most of the nation seems willing to follow Normanby's lead.

Inspector Carmichael learns otherwise when he's called to investigate an explosion in a London suburb that killed a prominent actress and her male companion. Incriminating paperwork in the woman's house suggests the victims were trying to build a bomb before their amateurish efforts literally blew up in their faces, but who were they working for? And will they try again?

Meanwhile, stage actress Viola Lark is preparing for her performance as the Danish Princess in a gender reversed staging of Hamlet when her estranged sister Siddy contacts her for the first time in years. Worried at the desperation in her sister's voice, Viola agrees to meet - and winds up coerced into an anti-government plot to kill Normanby and Hitler during the Fuhrer's visit to England. Viola's just the person they need to plant a bomb in the theatre while Hitler watches her show.

Viola, born to an eccentric and politically diverse aristocratic family (closely modelled on the real-life Mitford sisters), left her upper-crust origins behind to pursue a life on the stage. In that way, she's much like Mrs. Kahn from Farthing - a blueblood who renounced her birthright in order to pursue her passion. Viola is a little less sympathetic than the generous-hearted and idealistic Lucy, but her character arc is just as interesting. Viola doesn't give a damn about what's happening on the continent. She thinks the stories about the concentration camps are rubbish and the politics have nothing to do with her. She's just an actress - she wants to read and perform and receive applause. That's all. The world's too big for anyone to really change it, after all.

Yes, Viola is a fairly selfish person. She lives in her own little sphere and resists (understandably!) the pleading diatribes of the conspirators who fall over themselves trying to explain their good intentions, even as they regretfully admit they'll have to "silence" her if she doesn't comply. And yet, her own observations as she assists with their plans slowly clue her in to the fact that the world is not okay, and hiding in one's dressing room only makes it easier for monsters to seize power. Even if, when she actually meets Hitler face-to-face, she discovers she "instinctively [likes] him."

The novel also sees the return of Inspector Carmichael, who's grown remarkably world-weary in the few short months since Farthing. Much like Viola, he's forced to participate in political machinations he finds extraordinarily distasteful. Now that his superiors (including the Prime Minister himself) know he's gay, he's a tool who has to dance to their tune if he doesn't want his private life with his lover Jack exposed to the public. Horrified at the thought of being their puppet indefinitely, he plans his early retirement - even as he works to protect the loathsome Normanby from a murderous plot.

While Ha'Penny has an engaging plot peppered with vibrant characters, it still suffers from "middle-book-itis." It doesn't really go very far or do very much, other than solidify the set-up for the third and final novel, Half a Crown. It doesn't even have a mystery, not really - we learn pretty early on that the inexperienced Lauria did herself in. It also takes every possible opportunity to throw the word "ha'penny" into the narrative, just in case we forgot the title of the book. It would make a pretty entertaining drinking game if you had some mulled cider, a rainy day, and a few hours to kill.

Thankfully, what it lacks in plot it makes up for in the exploration of its theme: the distance between a person, their intentions, and their ultimate actions. Viola's conspirators are all blusteringly well-intentioned, and we, the readers, cannot help but support their hatred of Hitler and the Nazis. However, they're willing to bomb a crowded theatre and coerce an innocent woman into being their accomplice - is this right? Meanwhile, Viola has to reconcile her knowledge of her sisters as girl she grew up with, with the understanding of who they are today - her sister Siddy is disturbingly willing to sacrifice Viola to serve her own ends, and another sister is married to Himmler (yes, that Himmler) and seems blithely oblivious to the Third Reich's atrocities.

While not quite as page-turningly-exciting as Farthing, Ha'Penny is an entertaining and thoughtful successor that only raises my expectations for the final book in the trilogy.
A-
Posted by AnimeJune at Wednesday, October 01, 2014