"Not Quite a Lady," by Loretta Chase 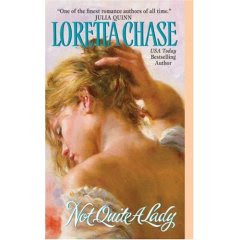 The Chick: Lady Charlotte Hayward - the 27-year-old daughter of a wealthy marquess who is perfectly perfect in every way. So why has she spent the last ten years being perfectly perfect while subtly deflecting any possible suitor?
Shady Past: Ten years ago, a heartless rake knocked her up, than died. Her new stepmother helped her hide her pregnancy from society (and her father) and give the baby to a good home, but Charlotte's terrified that if she marries, she'll have to base their marriage on a lie or be found out to be a "soiled dove," which would bring shame on her beloved father as well as reveal his beloved wife's deception as well.

The Dude: Mr. Darius Carsington - fifth son of the earl of Hargate. Clings to logic, reason and science with a grip that would make a Vulcan proud - and takes on and abandons lovers with the same amount of scientific detachment. His exasperated father has given him an ultimatum - fix up a dilapidated property (situated next to Marquess Hayward's, convenience) within a year, or marry into money immediately.
Shady Past: Well, he is a rake - but he never seduces the innocent. And his family is rather annoyed with him - but still supportive.

Charlotte: NO THANK YOU! *flees*

Darius' Dad: Fix up this crappy house - or get married!

Charlotte: Get your hands off! Hysterical-guilty-horny-irrational-woman-super-saiyan-ATTACK!

Darius: *walloped* I am in love! But it is not rational! Logic! WHY HAVE YOU FAILED ME?!

Darius: What was that?

Charlotte and Darius: *sex as distraction!*

Charlotte: I have to confess....I'm not a virgin.

Charlotte: That child is my son.

Charlotte: Can we keep him? He literally followed us home.

Inconvenient-Suitor-Morrell-Who-Also-Knows-Charlotte's-Secret: Too late, I packed him off to Ireland! Marry me?

Child: No he didn't!

The Word:Wonderful. This was a lovely book. I was so looking forward to reading it (not least of which because Julia Quinn called Chase one of the greatest romance authors of all time and because the gals at Dear Author raved over it) and it pretty much met all expectations. Excellent characterization, great writing, sex scenes that were hot as well as relevant (there's nothing that annoys me more than sex scenes that are written in that don't advance the plot at all).

The characterization was what got me most of all, especially Charlotte. Everything from her motivations for avoiding marriage to giving in to her feelings for Darius was realistic, well-explained, and beautifully written. I especially like that her first mistake, ten years ago, that resulted in a child was also motivated. Her stepmother is a brilliant, warm woman - both Charlotte and her father seriously lucked out in that area. Before Charlotte really got to know her stepmother, though, she just saw her as the woman only nine years older than herself that her father married less than a year after her mother died. Angry that her father was forgetting her mother so quickly, she made a terrible mistake that resulted in ten years of guilt.

Now of course, she's made a life for herself being the perfect daughter - the book goes on at length about how she's so nice that "even other women like her," instead of being jealous that every man within a fifty-mile radius thinks she would make top-notch wife material. Of course, her father, who is a very loving and supportive one, is insisting that she get married - he doesn't recognize that she's been knowingly showing her suitors to other, more suitable women and he genuinely thinks she should be married in order to live her life and experience true happiness. What Charlotte sees is a huge mess - if she gets married, she's certain it will be hugely obvious that she's not a virgin and will bring ruin to her family. In her mind, she's brought enough ruin to a family that has had nothing but love for her and she will do anything to avoid it.

And then there's Darius. He's a bit silly at the outset with his incredibly tenacious insistence on logic, nature, and rationality when it comes to relationships - he believes in sex (oh boy, does he ever), but love is a fairy tale. There is no example of it in the animal kingdom (which he studies and writes papers on extensively) so he doesn't believe it could really exist. He's immediately attracted to Charlotte but knows he can't do anything because he believes she's a virgin and any move he makes will only see him frog-marched to the altar on the point of a sword. However...

Reading the Smart Bitch review of it, one of the Bitches complained that it was unrealistic that Charlotte, whose life was ruined when she had unprotected sex with a rake, would engage with it with Darius. Couldn't that, in theory, just repeat her entire mistake? I have to say I disagree. Chase, with beautiful prose, expertly maintains Charlotte's inner monologue - the way she purposely denied herself happiness for ten years, her loneliness, her discovery of a mad old woman's letters decrying not having the courage to live one's life, and also the significant ways in which her relationship with Darius is nearly the complete opposite of her dalliance with the Dead Rake all served to show that her decision to connect with Darius was one founded on completely different reasons than her hook-up ten years ago. Other reviews also complained about the fantasy aspect, like how her son shows up due to luck. I dunno - maybe as a fantasy reader as well as a romance reader, I can tolerate magical coincidences more than the next person, but I wasn't at all bothered by it, and I thought it made an interesting addition to the narrative.

Another aspect of the novel that I loved was the Villain - who wasn't really a villain. In fact, I wouldn't be completely surprised if Colonel Morrell got a part in his own romance novel. An admirer of Charlotte and a long-time friend, he's actually noticed how she's been intentionally side-stepping matrimony over the years and, through ingenuity and his unscrupulous manservant, he eventually discovers her secret and still wants to marry her. At the same time, though, Chase, without actually "telling" us, "shows" us in marvelous detail just how he could never be a good match for her - and yet, he wasn't a bad person in the least. He didn't try to blackmail her (although she took it that way), he didn't plot against Darius, he didn't lie or cheat or even steal or kick puppies. He was just the wrong man for her. I loved this aspect - reading romance, I've come across a lot of exes or romantic rivals who are so obviously wrong to the point of them being assholes, that it was refreshing to come across one who was a genuinely good person, just a bad match.

I have another one of her books on my TBR shelf - Lord of Scoundrels, and I'm definitely looking forward to reading that, but I have a few other things to take care of first. Anyway, this book was definitely a A.