"The Secret Pearl," by Mary Balogh 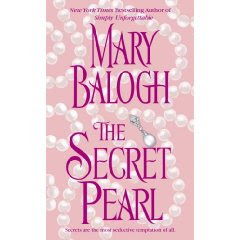 The Chick: Isabella Fleur Bradshaw - a.k.a. "Fleur Hamilton." Starving on the streets of London after fleeing from her obsessive cousin and trumped-up criminal charges, Fleur is forced to rely on the ultimate last resort to keep herself alive: prostitution.
The Rub: While she miraculously lands a job as a governess only days after selling her virginity, she is appalled to discover her new boss is none other than her first (and only) john!
Dream Casting: I read the description and thought immediately of Amy Adams - only slightly younger.

The Dude: Adam Kent, Duke of Ridgeway. Dealing with frustrations in his personal life, he purchases a whore to vent his pent-up emotions on. Afterwards, taking pity on her (and feeling slightly guilty) he orders his personal secretary to hire her on as a governess for his daughter, Pamela.
The Rub: He's scarred from the Battle of Waterloo, but worse, he's married - to a woman who makes no secret of her preference for his younger brother, who was briefly Duke in his place while Adam was MIA after Waterloo.
Dream Casting: I was in a bit of an Enchanted mood while reading this, so I pictured Patrick Dempsey (with a scar), but Clive Owen would suit just as well.

The Plot:
Fleur: I need food!

Fleur: You couldn't have shown up any sooner, like, before I had to sell my body? Who's my boss?

Adam: Fleur, you're finally safe, but we can never be together because I have a duty to my wife and my family.

Sybil: *throws self in lake* Splash!

The Word: In a word: exquisite. This book is probably my favourite historical romance of all time, and it's right at the top of the list of absolute favourite romances, period. And I knew this about fifty pages in. It almost made me want to go back and change all my previous A reviews because they weren't nearly on the same level with this one. It's that good.

Adam Kent, Duke of Ridgeway, comes out of a theatre and sees a woman in the shadows. He recognizes her as a whore, but a newly-minted one: thin, dull-eyed, and dressed only in a wrinkled blue silk dress, she offers no lures, uses no sexual wiles, or makes any real attempt to sell herself (pun intended). He purchases her anyway for reasons known only to himself. He buys a room in a cheap inn, orders her to take her clothes off and lie on the bed, and then he uses her. I really mean the word uses - he doesn't rape or (intentionally) hurt her, but this is no love-and-roses-and-miraculous-first-orgasm deflowering as is common in lesser romances. He has sex with her to vent his own lusts and frustrations and anger and gives no thought whatsoever to her comfort or needs. After the act is finished, he buys her supper and pays her triple her asking price.

However, after sending her on her way, he feels a strange responsibility for her. He knows she was a virgin when he bought her, and could tell from her behaviour that prostitution was her very last and very desperate resort. He decides to send his secretary to the nearest London employment agency to wait for someone matching Fleur's description to show up, with the intention of hiring her as a governess for his young daughter Pamela, who currently lives on his country estate.

Fleur, meanwhile, rouses herself from the depths of despair into which she sank after her foray into prostitution to visit said employment agency, and is overjoyed to be offered the job, although she is unaware of who her true employer really is. Hopeless and starving and on the run from nasty relatives, she had sold herself because her only option was survival. While she can't help but wish that the job offer had come only a few days earlier, she is determined to be the best governess possible and completely forget that one horrible night when she irrevocably lost her gentlewoman status and became a whore.

However, she can't forget. While her job is easy (Pamela's indulgent and lavish mother and elderly nurse insist the child is too delicate for rigorous learning), Fleur has terrifying recurring nightmares about the dark, ugly, scarred man who took her virginity for himself in a night of abasement and selfish pleasure. However, in the daytime she comforts herself with the fact that she will never see him again.

However, Adam finds himself obligated to return to his country estate when he hears that his wife, Sybil, is preparing another raucous and extravagant party for her select (and notoriously indiscrete) circle of friends in his absence. Their relationship is strained, mainly because she is a Big Fat Ho who takes several lovers but won't let Adam touch her. He decides he has to return to keep an eye on her - and also, secretly, to see how Fleur is doing in her new position.

When Fleur finally discovers the true identity of her employer, her feelings of horror and revulsion are beyond words. Frankly, she's about as unwilling as Sybil for Adam to touch her, although Adam makes no attempt to try. While she could always quit, she really has nowhere else to go and her nasty relatives could still be looking for her.

I think the main reason I adored this book is because it highlighted the difference between sexy and romantic. Lots of romances these days (mostly in contemporary but now in historicals as well), the two go hand in hand. Two people meet, fall in instant lust, have lots of sex and accidentally fall in love later. I prefer romantic, and Balogh shows how sexual attraction is good for romance, but not immediately necessary.

Fleur and Adam's first sexual encounter is one of the least sexy, attractive, or fun sex scenes I've ever read, and intentionally so. Although Adam is not cruel or hurtful, the context of the experience and Adam's self-gratifying method traumatize Fleur and leave her with a deep-seated fear not only of Adam, but of sex itself. Fleur, for several chapters after their reunion at Adam's country estate, is both psychologically and physically repulsed by Adam. None of this, "oh I do so hate that tiresome but secretly sexy manly man" hatred that almost immediately turns into passionate, uncontrollable attraction two chapters later, but serious, terrifying hatred. Seeing him makes her want to throw up.

The encounter isn't a cakewalk for Adam either. He almost immediately feels guilty for what he's done, not only because he cheated on his wife, but because he tried to lose his strangled emotions of self-loathing and loneliness in mindless sex, only for it to make him feel worse. While his marriage is pretty much a sham, he was in love with his wife once and he dotes on his daughter and so he resumes his duties to his marriage vows with all the strength he can muster.

The barriers separating Adam and Fleur are numerous and realistic and not at all contrived. None of this "I can't love you because your cousin's hairdresser's dog's groomer's brother killed my brother in a duel" bullshit. Adam and Fleur are intensely noble, loving, and, yes, moral people who are not willing to throw societal expectations and marital obligations to the winds in the face of their growing affection. But grow their affection does, and in wonderful, subtle ways. The Secret Pearl is a long book as far as romances go, so Balogh has plenty of room for Adam and Fleur to slowly and naturally lose their fears around each other and develop something more for each other.

All of this, of course, is paired with superb characterization and a gorgeously-described historical setting. None of the novel's villains (Sybil, Adam's brother Thomas, and Fleur's cousin Matthew) are permitted to be cartoonish, because that, in turn, would cheapen Fleur and Adam's own inhibitions. While the villains' actions are despicable and selfish, their motivations are undestandable or at least realistic - particularly with Sybil. With the first couple of chapters, I was convinced she was the Evil Whore Wife who cared only for her own carnal pleasure and whose fate was sealed from the very first Significant Dry Cough. However, by the end of the novel, while her actions are in no way less hurtful or immoral than they were before, her tragic history provides a reasonable and understandable motivation for her actions and makes her simply a misguided and sad human being with a story of her own, rather than a cardboard ho for the heroine to knock over on her way into the hero's arms.

Besides two sex scenes, and about a dozen kisses, Adam and Fleur share no other sexual contact. Since their first sexual act was so traumatic, their love for each other has to develop and exist independent of lust. It made the few moments when they were intimate that much more romantic and significant. This was a sweet, addictive, beautiful and satisfying read from start to finish, and I'll definitely be checking out Mary Balogh's backlist. It was not a very sexy read, but it was very romantic, and I found I enjoyed it more because of it. A+.
Posted by AnimeJune at Wednesday, August 27, 2008