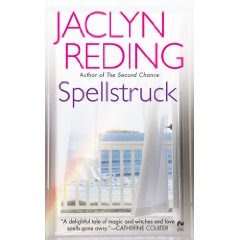 The Chick: Jenna Wren. A single mother to two kids, and owner of a popular spa in her hometown of Ipswich-By-The-Sea, she treats the town's women to fantastic herbals treatments that leave customers feeling refreshed and changed ... almost as if by magic.
The Rub: ... Because it is. Jenna, along with her mother and sister, are descended from a long line of hedgewitches, but they have to keep their powers secret - mainly because the town is infamous for banishing a woman suspected of witchcraft to a desolate island three hundred years prior.
Dream Casting: Small New England town? A young mother? I immediately thought Lauren Graham.

The Dude: Jack Gabriele. Formerly Jenna's husband, they married right out of high school, but after years of struggle and an unspoken misunderstanding, their marriage crumbled. While they've been divorced for four years, Jack still carries a torch for her.
The Rub: During senior year, rumours broke out that Jack had cheated on Jenna with the school tramp, rumours that Jack never refuted. Jenna, being pregnant, married Jack anyway, but never quite believed that he'd been faithful.
Dream Casting: Alex O'Loughlin.

The Other Dude: Declan Cavanaugh. A gorgeous, wealthy, charming mystery man who stops into town and has an eye for Jenna.
The Rub: He just might be a figment of Jenna's seven-year-old daughter's imagination. Or eeeeeeeevil.
Dream Casting: The Mentalist's Simon Baker.

Jenna: I wish I had the perfect man.

Declan: Not so fast! I haven't even BEGUN my evil plans yet!

1 Too Sexy For His Own Good Villain

The Word: Jenna Wren worked as a homemaker for years, raising her two children while her husband Jack became more and more distant. When their marriage crumbled, Jenna was left with no college education and no experience. Somehow, through sheer determination, her supportive family, and her own unique skills, she pulled herself up by her bootstraps and became a small-town (and beyond!) success.

In the picturesque New England town of Ipswich-By-The-Sea, Jenna's hair salon and spa, IpSnips, has become the number one place for a woman to relax and gain some inner peace. Partly, this is because Jenna (along with her sister and her mother) are witches - hedge witches, to be more precise. Using herbs and spells, Jenna creates products and treatments that grant peace, self-confidence, attractiveness, and even fertility. Her family has kept it a secret, mainly because the town is infamous for the legend of the Ipswitch - a woman who was banished to a nearby island 300 years ago on suspicion of witchcraft who has become the town's boogeyman and supernatural scapegoat. "Coming out" as a witch doesn't seem too wise in a town that takes great glee out of demonizing them.

Despite her success, Jenna is lonely. The problem with living in a small town is that she knows everybody and everybody knows her - and everyone also knows her ex-husband Jack and his jovial Italian family, which means that the pool of willing daters is infinitesimal. In a moment of frustration, Jenna and her sister Hallie dream up a recipe for the Perfect Man - including blond hair, green eyes, money, humour, and a host of other fantasy properties. Unbeknownst to them, they're overheard by Jenna's seven-year-old daughter Cassie. Cassie swipes the list to try out her own burgeoning magic powers, with the intention of creating a boyfriend for Hallie.

However, things go awry. The next day, a mysterious stranger appears in town, the exact match for Jenna's list, but instead of hitting on Hallie he sets his eyes on Jenna, who is bewildered but pleased.

I thought I knew how this novel would turn out - that the novel's plot would revolve around cutesy antics between Jenna and the spell-made hunk, but no. The appearance of Declan Cavanaugh acts more like a catalyst for the plot, rather than the plot itself. Jack, you see, still has feelings for Jenna. He's slowly been building himself into a better man - improving his education, learning his own craft (architecture), all under the assumption that he'll be able to re-enter Jenna's life whenever he's ready. The sudden appearance of a sexy stranger who shows attention to Jenna gives him a none-too-gentle jolt.

This is one of the reasons I loved this book - while there is an element of magic, and it's important to the characters, I don't think I could categorize this book as a fantasy because the magic isn't a huge element of the plot - most of it revolves around Jack and Jenna reuniting, town politics, and the secrets that caused Jack and Jenna's first marriage to dissolve.

If you've read the Romance Convention Checklist, you'll notice the "Big Misunderstanding" convention. It's common enough to be a cliche, and is usually one of the least tolerated. But Reding shows us that even though something is a bit of a cliche, doesn't mean it can't be done well.

The Big Misunderstanding plot is usually such a howler because it's usually maintained by character flaws that readers despise: jealousy and idiocy. What usually happens with Big Misunderstandings is that one of the protagonists will perform an action that, while innocent, is interpreted out of context by the other. For instance, the heroine might kiss her male cousin on the cheek at the train station, and the lurking hero might think "She has another man! The whore!" Big Misunderstanding plots are egregious because the misunderstanding is usually so tenuous, because it stretches out a problem over three hundred pages that could be easily solved by a simple, pointed conversation.

However, the misunderstanding in Spellstruck is one that helps the novel, because it isn't the only means of support for the plot. Basically, back in highschool while Jack and Jenna were going steady, rumours ran rampant through the school that Jack and Diana, the school tramp, had hooked up. While Jack told Jenna personally that nothing happened, for reasons of his own he refused to openly discredit the rumours.

However, unlike typical Big Misunderstanding plots, this misconception doesn't immediately put a halt to Jack and Jenna's relationship. Jenna married Jack anyway. In a realistic fashion, the Big Misunderstanding did not directly affect their relationship - in this case, it affected how Jenna understood Jack's character. Married right out of highschool (Jenna found out she was pregnant at about the same time the Jack/Diana brouhaha began), her unquenched suspicions created a snowball effect that gradually accumulated all kinds of other, realistic marital problems that all contributed to their eventual divorce.

However, it certainly helps. This reunited-lovers tale was a cozy delight to read. Jack and Jenna's relationship started when they were teenagers, when they had to struggle to make ends meet with two small children, when they were forced into difficult roles out of necessity. When they reunite, both are successful, accomplished adults who've taken a stab at their dreams, so their relationship blossoms in new, and wonderful ways, and they are more able to share themselves, because they've finally come to understand who they are as people.
There were a few flaws, but most of these are a matter of preference. The biggest flaw: I thought there was a little too much exposition for my taste - I understand that Reding wants to give the reader a detailed portrait of everyday life at Ipswich-By-The-Sea (heaven knows now I want to live there), but it sometimes comes at the expense of a pages-long infodump or tangent on one of the minor characters' personal lives that I didn't feel was particularly relevant to the story. Also, readers who like a little surprise in their novels will want to steer clear of this one - while beautifully written, the outcome is easily predictable from within the first couple of pages.

However, these flaws are easily overlooked, especially by the fact that a book with a plot like this could have turned out much worse if written by a lesser writer. The magic in the story is ultimately a supportive device, and Reding wisely keeps it that way. Even the eventual showdown with Cassie's mixed-up spell is dealt with quickly and finally, with little angst. Jaclyn Reding instead delights readers with a different type of magic: that of wonderful writing. B+.
Posted by AnimeJune at Sunday, September 28, 2008