"The Heir and the Spare," Maya Rodale 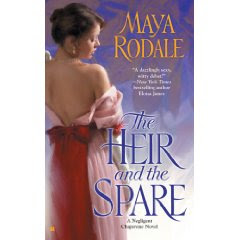 The Chick: Emilia Highhart. An American heiress, she travels to Britain to try and land a titled husband in order to please her industrialist father. She falls hard and fast for a man others identify as Lord Phillip Kensington, but is confused by his contradictory treatment of her.
The Rub: Along with being as clumsy as a three-legged giraffe, she has the bad luck to fall in love with an identical twin - so who is she really in love with?
Dream Casting: Bryce Dallas Howard.

The Dude: Lord Devon Kensington. Born a minute after his twin brother Phillip, he's always been referred to - by both his brother and his cold Duke of a father - as "the spare," and therefore not as worthy of respect or attention. Forced to flee Britain years ago after impersonating Phillip in a duel that went bad, he turned to trade and became successful and wealthy on his own merit.
The Rub: Returning to Britain after hearing news about his father's failing health, he is dismayed to discover that Phillip has convinced everyone in the ton that his twin Devon died in a shipwreck - so when Emilia falls into his arms, it's Phillip she thinks she's in love with.
Dream Casting: Milo Ventimiglia.

Phillip: A cure to my money problems!

Emilia: I figured that out, thanks.

Phillip and Devon: We hate each other!

Emilia: Yeah, I knew that too.

Phillip: Marry me and be a duchess!

Emilia: How about NO.

Devon: Marry me, then, since I've compromised you.

Emilia: Now that I can live with.

Butler: Congratulations - by the way, Devon, you're actually the firstborn! So you're the Duke!

1 Regency-Era Equivalent of Car Sex (in a moving carriage!)

1 Ignored Butler with an Important Secret

The Word:Emilia Highhart is a stumblebum - she's renowned for bashing into tables, falling down stairs, and tripping over carpets, loose cobblestones, and her own feet. So she's not completely surprised when she loses her footing going down the stairs at her first ball of the Season. However, she is pleasantly surprised to land in the arms of a handsome dashing gentleman who later steals a kiss from her before leaving mysteriously. According to her aunt and chaperone, the man is Lord Phillip Kensington, a scandalous rogue (is there any other kind?). Around Emilia, however, he displayed all the manners of a gentleman, so she figures the rumours can't all be true.

However, the man who caught and kissed her wasn't actually Phillip, but Devon Kensington, Phillip's twin brother. Separated in age by barely sixty seconds, Devon, as the youngest, was all but ignored by his father, who rested his attention on Phillip, the all-important heir. Nicknamed the "spare," and treated as such by society, Devon spent his life striving to be better than his brother and gain a measure of his father's approval. When his father requests that Devon stand in for Phillip in a duel with another Duke whose wife Phillip debauched (so that, again, the all-important heir's life need not be risked), Devon complies, but when the duel goes bad, he flees for America, determined to achieve his own success freed from the restricting expectations of his father and society.

And succeed he has - but when he hears his father's health is failing, he returns to Britain in order to pay his last respects. He tries to lay low (as he is unsure of how welcome he may be in his mother country after seriously injuring one of the Prince Regent's BFFs), but soon realizes it's not necessary: during the years of his exile, good ol' Phil convinced everyone that his brother had died at sea. While he's instantly attracted to Emilia, he leaves after kissing her because he doesn't want to follow in his rakish brother's footsteps.

Hilariously enough, Phillip's roving eye lands on Emilia as well. He's amassed a huge debt through partying, and sees the plucky heiress as the solution to his mounting financial problems. The fact that she already seems disposed to like him (mistaking him for Devon) is a bonus. He brushes off the fact that he can't remember doing the things she insists he did as a result of his binge drinking.

Emilia observes the surprising changes in "Phillip's" behaviour with confusion and concern - at times he seems caring and affectionate (Devon), while at others thoughtless and perfunctory (Phillip). Thankfully, she discovers her mistake quickly enough to save the novel from turning into some cutesy Regency remake of the Olsen twins' It Takes Two - once the twins are aware of each other's intentions for Emilia, it turns into a fierce competition built on years of spiteful, bitter twin rivalry.

However, although the plot steers away from the silly "which twin is which?" antics, the romantic tension and conflict dissolve soon afterwards. Emilia and Devon admit their love for each other fairly early in the plot. What remain are frivolous obstacles that compete to be the silliest and most irritating - most of these involve Phillip's ever more desperate attempts to marry Emilia by any means necessary (including faking a compromising position), Devon's painful tendency to misunderstand Emilia's feelings for Philip (what she evinces as utter disgust Devon somehow interprets as a hidden ambition to one day be a duchess), and Emilia's distress that Devon, despite showing her he loves her in a rainbow of magical ways, won't actually say he loves her, in those exact words, to her face.

The plot is ridiculous cotton candy fluff, but the characters are compelling enough to read on. Emilia showed every potential of being a character I despise, and yet never became one - she's girlish, naive, falls in love very quickly, has a "delightful" tendency to "adorably" trip over everything, and responds to problems by baracading herself in her bedroom with the promise to never come out. However, she treats her clumsiness as an ordinary flaw to be recovered from and dealt with as professionally as possible, rather than as an "aw-shucks" mannerism to be nurtured as an essential part of her personality. She also learns the difference between Phillip and Devon very quickly, and has the smarts to recognize Phillip's cold and rude behaviour as a sign he is a cold and rude person, and something she's not willing to put up with, unlike some other romance heroines (*cough*Bella from Twilight*cough*).

However, The Heir and the Spare is really the Phillip-and-Devon show. Both are driven by jealousy and bitterness thanks to an upbringing by a father who liked nothing better than pitting one brother against the other. Devon hates being denied a father's respect and affection simply because he exited his mother's womb sixty seconds later than his brother, and dedicates his life to earning success on his own terms.

And Phillip .... Oh, Phillip. Unbeknownst to Devon, the spoiled heir didn't spend his childhood basking in his father's love, either - rather (out of Devon's hearing), Phillip was always compared to his brother and found wanting. He hated the fact that he was the heir to a Dukedom and thus one of the biggest catches of the ton and would inherit a fantastic estate and couldn't be the smartest, most responsible, most talented brother as well. It reminded me a bit of the relationship between twin brothers George and Oscar Bluth from the TV show Arrested Development. George, the businessman, had a wealthy successful company. Oscar, the hippy, had a full head of hair. In one scene, George orders a hooker and spends the night blubbering about how unfair it is that Oscar has all that great hair. "Why can't I have the company and the hair, and Oscar have nothing?" he wails. "It's not fair!"

It's much the same way with Phillip. Cry me a river, Phil. He's mesmerizing to watch - not because he's a sexy rake, no, quite the opposite - he's such an complete, over-the-top fuckup it's like watching a train wreck in slow motion. He has no tortured backstory (other than the "wah wah my daddy didn't love me" one), he has no dark past, he's just a spoiled selfish pig who is entirely motivated by narcissism. His entire mindset is, "I'm a sexy, powerful manly man! It is beneath me to feel second best to ANYTHING!" and I get to read with increasing glee as his overriding self-absorbed desire to make himself look better digs himself an even bigger hole to bury himself in. This is a guy who told his family and friends that Devon was dead in order to get more attention.

To be a devilish, sexy villain one has to succeed at being a devilish sexy villain - and Phillip can't even do that. All of his half-cocked drunken schemes (and there are many) to snag Emilia end with him flat on his face with Devon's boot halfway up his ass, every time. Amazingly enough, Phillip eventually gets his own book - The Rogue and the Rival. But he's no Sebastian St. Vincent (of Devil in Winter fame), so I have no idea how he'll come close to redeeming himself. The characters were fun to read about, but the plot fizzled out the halfway mark. B-.
Posted by AnimeJune at Thursday, October 16, 2008