"Gilding the Lady," by Nicole Byrd 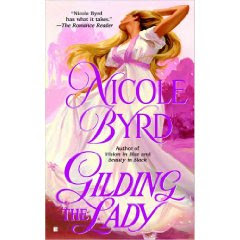 The Chick: Clarissa Fallon. Yanked from her upper class life as a child and dropped into the servant class by a Duplicitous Solicitor, she's only recently been rescued by her brother and his wife, who believe the best way to make up for lost time is to train her to be a lady again and give her a proper social season.
The Rub: Nasty people from her unfortunate past have a tendency to show up again, and either try to murder her or frame her for murder.
Dream Casting: Atonement's Romola Garai.

The Dude: Dominic Shay, Earl of Whitby. After Dominic humiliates the cousin of one of his friends, said friend makes a bet that he can't turn the clumsy, foul-mouthed Miss Fallon into the toast of the ton.
The Rub: He's damaged from the war, and doesn't like having responsibility over people's lives.
Dream Casting: I got lazy this time around, and just thought of Hugh Jackman.

Clarissa: Oh, 'ow will I evah be a damn shit bloody lady with my lower-class clumsiness and bad language and socialist sympathies?

Dominic: Fine, whatever. Hello Clarissa, let's see if we can make you into a lady...

Bone-Headed Magistrate: A large, female criminal was murdered! Surely it must have been the wisp of a gently-bred girl with powerful social connections who done it!

Clarissa: Let's save me from the noose, first.

Gemma, Clarissa's Sister in Law: Jinkies! Let's put our heads together to solve the crime!

Criminals (all but one): *CAUGHT!*

Final Criminal: Nyaa! There's only one thing I can do! Blow up the witnesses!

Clarissa and Dominic: *trapped by gunpowder*

Dominic: We've only got an hour to live - let's see if there's a window, or some way to escape!

Clarissa: Actually, I was thinking we could have sex first.

Dominic: Do we have time?

Dominic: Then let's get it on!

The Word: In the case of this book, I really do think you can judge it by its cover. It's pink, has a bizarre title that has little to do with the story itself (I think it's some bastardization of "Gilding the Lily"), the image looks like a woman having a seizure, and, although you can't tell from the photo, it's covered in glitter. That pretty much explains this novel - in a nutshell, it's a cutesy, cheap, incomprehensible piece of idiotic, inconsistent drivel whose plot convulses in all directions.

As the novel starts, it looks like it might at least have an interesting story, if a blunt and spoon-fed writing style and characters who are stereotypes from the outset. Apparently (I say apparently because I think most of this story is explained in more detail in Byrd's previous novel Vision in Blue) when Clarissa Fallon was a little girl, her brother was lost at sea and her mother died, and the Duplicitous Solicitor charged with her care dumped her in an orphanage so he could keep her trust fund for himself (to purchase a lifetime supply of wax for that handlebar moustache of his, I'm assuming).

Anyway, after years of abuse at the orphanage, she was sold into service and worked as a maid until her brother and his sweetheart Gemma tracked her down and returned her to the good life. Sadly, she's picked up a few bad habits from her time in service - including bad language (translation: "says 'bloody hell' a lot"), clumsiness, a lack of manners, and a "charming" tendency to drop her "h"s. Her brother and sister-in-law try to prepare her to have a proper social season, but apparently demonstrating good breeding and flawless manners isn't like riding a bike.

Enter Dominic Shay, a man adored by the Ton for ... well, apparently for being an ass. When one of his thoughtless comments humiliates the cousin of one of his friends, the friend makes a wager. Pointing to a girl running with wild abandon from her outraged governess outside their men's club, the friend bets that Dominic won't be able to transform her into the toast of the ton. Dominic accepts.

So we have this Eliza Doolittle My Fair Lady thing going on - not bad. Their meet-cute continues the interesting-if-not-exactly-genius element of the novel: Clarissa, frayed by the pressure to re-learn lady-like behaviour, trades places with her maid for a few minutes so she can engage in a normal, relaxed conversation with some neighbouring servants - and gets unmasked by Dominic, who has no idea what she's doing. Could this lead to something interesting? Sadly no.

The plot takes a complete U-turn when Mrs Craigmore - the villainous matron of the orphanage Clarissa stayed in who ended up fleeing with embezzled funds - turns up dead, strangled by a scarf Clarissa dropped on the street. The major eye-rolling doesn't start until an oblivious magistrate has Clarissa dragged into the law courts to declare her a person of interest in the crime - even though there were no witnesses, the victim was a huge-ass woman with a criminal past and Clarissa is a blond wisp of a thing, and without even taking into consideration the fact that Clarissa's a gently-bred lady with a shit-ton of powerful social connections (Countesses and Earls and Marquises, oh my!). Realistically, no magistrate in his right mind who valued his job would so bluntly accuse a woman of Clarissa's social stature on such a dearth of evidence (the only thing that ties Clarissa to the crime is her scarf and a witnessed disagreement between her and Mrs Craigmore).

But of course, NO ONE in this book considers these completely logical facts. Clarissa half-convinces herself she's headed for the gallows already, and the Pygmalion plot is promptly jettisoned for Regency Scooby-Doo as Dominic, Clarissa, and all of her muslin-clad girlfriends take out their magnifying glasses and Nancy Drew Amateur Detective kits to try and find the real murderer before the English Legal System (which has never been known to favour the white, wealthy, and upper-class before!) invariably condemns poor Clarissa to death.

This book reads like something a highschooler would write for a project on category romance - each character resembles a doll plastered with post-it notes detailing some romantic cliche or other. Clarissa's got a Traumatic Past, a Delightful Sympathy for the Lower Class, a Lower-Class accent. Dominic's got a Facial Scar, a Traumatic War Past, a Disdain for the Ton, etc. However, Nicole Byrd never actually follows through on any of these tropes or keeps them consistent with their characters. Clarissa inexplicably loses her servant accent halfway through the novel, and somehow, even though her My Fair Lady subplot was interrupted by muuuuurder, still manages to ace her coming-out ball.

Similarly, we are told Dominic has a scar and a traumatic war past, but does he have nightmares? Shades of PTSD? Does his scar affect how his face moves? How other people see him? Are other people repulsed? That answer to all these questions is no. None of these time-worn stereotypes have any bearing or relevance on these puppet-like characters or how other people react to them - which makes the novel read like Byrd felt she had to stick her characters with these stinkers or people wouldn't think she was writing a romance novel.

On top of that, her plot is obviously, egregiously contrived. The best romance plots are stories that are determined by the actions and decisions of the characters. Romances are, at heart, character-driven stories. However, in Gilding the Lady, Byrd treats her narrative like a hockey puck, an inanimate object to be smacked around by unbelievable coincidences in the direction of her choosing, rather than letting the consequences of her characters' actions move the plot forward.

The most obvious instance of this is the ending. I have no qualms about spoiling this, because it is so exhasperatingly bad that if it prevents you from reading the book, I have done you a service. Dominic and co. eventually thwart the gang of thieves who killed Mrs Craigmore, but their ringleader (who coincidentally turned out to be Clarissa's dancing-master - whoda thunk?) escapes. However, they've gathered enough evidence to clear Clarissa's name so Clarissa and her family go out to the country to have her coming-out ball.

It's at this point that Clarissa says, "We only have an hour to live. Sure, we could spend that looking for a window or calling for help or ripping my ballgown into a rope - but why don't you take my virginity first?" Cue the gagtastic Oh-My-God-Magical-First-Time-Deflowering-Orgasm scene. Of course, once they're finished, then they find a window to call for help, which appears within the minute. I very nearly put the book down then (this wasn't the first time I'd had that impulse, though). For three hundred pages, Clarissa and Dominic battle sexual tension without anything more serious than some hot kisses, but it must have been around this time that Nicole Byrd got the ridiculous bullshit idea that if she didn't put in a steamy sex scene full of throbbing and heaving and mindless pleasure, that her readers might mistake her book for something else (like *gasp* regular fiction???). Once again, the actions the characters take don't seem motivated by firm and well-established characterization, but by the outlandish and absurd dangers that Nicole Byrd puts them in.

In essense, avoid Gilding the Lady at all costs. It looks and reads more like a sad parody of romance than a true example of the genre - everything from the pink glitter of the cover to the bland, blind supportiveness of the hero to Clarissa's anachronistic "hot DAMN" approval of the Earl's hot bod at the start of the novel speaks to the lowest common denominator. Girls like pink! Girls like glitter! Girls like steamy sex scenes with no narrative-build up! Girls don't care if the heroes have no consistent character traits so long as they're hot! Girls want to read about a Cinderella story but would much rather skip the boring work the heroine has to do in the middle for something more exciting - like a murder mystery! Girls like CSI, right?

Gilding the Lady is essentially the book that non-romance-novel-readers think we romance-novel fans read. Want to prove them wrong? Then leave this book the hell alone. D-.