"Lost in Austen" - Lost in AWESOMENESS 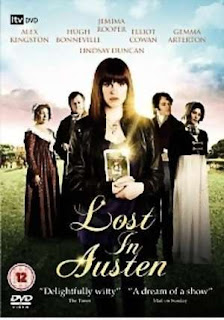 See this miniseries. Rent it, buy it, steal it - so long as you watch it, I don't care. This delightful series I discovered merely by chance turned out to be one of the most awesome Austen(ish) adaptations I've ever watched.

Here in Canada, the W Network showed it as part of their Jane Austen Marathon weekend. I thought the idea looked funny, so I TiVo'd all four episodes, with no idea what I was in for.

The gist of the story is this - Amanda Price, an average British woman from Hammersmith, is starved for romance. She works at a boring little job at a bank with an unsatisfying live-in boyfriend. Her ultimate guilty pleasure is to settle in on her couch in a fluffy bathrobe, with a bottle of wine, and a lovingly crinkled copy of Jane Austen's Pride and Prejudice. When one of these reading nights is interrupted by her boorish boyfriend, she storms off to her bathroom - and discovers Elizabeth Bennet in her bathtub.

Yes, that Elizabeth Bennet. Austen's Elizabeth Bennet. Our Elizabeth Bennet. Lizzie explains that the attic in her house has a mysterious door set into an outside wall that logically shouldn't go anywhere - only when she finally managed to force it open, it inexplicably led her to Amanda's bathroom through a door Amanda had painted shut. Disbelieving, Amanda tries the mysterious door, only for it to slam closed - stranding Elizabeth Bennet in 21st century Hammersmith, and Amanda in, well, Pride and Prejudice, around page 5 or so.

To Amanda's horror (and excitement), she finds herself in the middle of her favourite novel, surrounded by characters she's loved and loathed for fourteen years, with one really big problem - the main character who is supposed to set all of the book's beloved events in motion is now MIA, and it looks like Amanda, who knows little of 19th century manners, rules, and customs, will have to take her place.

If you live in an apartment, condo, or townhouse that shares thin walls with other people, either invite your neighbours over to watch it with you or else watch it while they're on vacation because you will be loud when you watch this miniseries. I know I certainly was, most of my exclamations falling under four categories: 1) "YES! YES! YES!" 2) "OH FUCK, NO!" 3) "THEY CAN'T DO THAT!" 4) "OH GOD THAT'S AWESOME!" all interspersed with wild laughter and general shrieking.

This is not a strict, accurate adaptation of Pride and Prejudice, by any stretch of the imagination. Although Amanda arrives in the 19th century English countryside armed with a novel's worth of information about the characters, her clumsy attempts to keep the story on course without Elizabeth inevitably send the plot careening off the rails. In the first episode alone she flashes her privates ("It's called a landing strip!" she explains to a fascinated Lydia), snogs Bingley, earns the suspicion of Charlotte Lucas and, of course, comes face to face with Mr Fitzwilliam Darcy (a gorgeously brooding Elliot Cowan) - and the wrong end of his infamously disapproving glare.

To put it bluntly, the miniseries fucks with Pride and Prejudice's plot pretty hardcore, which is part of the show's madcap charm. The wrong characters marry, relationships between famous friends are destroyed, alliances are struck between former enemies, and secrets are revealed. So why did I end up submerged in sudsy, screwball fun instead of drenched with outrage?

Because the miniseries ultimately stays true to Jane Austen's work, just not in the way that you might expect. Mainly, this is through the screenwriters' apt grasp of the characters and the period, as well as their superb script. Even though Amanda's presence causes the story to change, Jane Austen's characters remain the same. Even with Lizzie gone, the way they react to Amanda and the story's new developments remain consistent with their personalities, biases, and quirks. For instance, Amanda's common sense and modern belief in marrying for love realistically earn her the admiration of Mr Bennet and the wrath of Mrs Bennet. And Mr Darcy is as much of an arrogant asshole with Amanda as he was with Elizabeth, to the point where even Amanda's instinctive lust for him fades in favour of disgust.

However, in a few instances, new elements are added to the characters (including a retcon of a significant character's backstory) - but most of these changes concern things that were either a) never brought up in the novel so there's nothing to contradict (such as Mr Collins' hilarious first name and his immediate family), or b) things you'd expect people to lie about (like the shameful backstory).

A great deal of the fun of this series lies in watching what will happen to these characters next. Most Jane Austen fans like me are completely familiar with the plot of P & P, we could recite what happens with our eyes closed, we've watched the cinematic adaptations (the Colin Firth version, the Keira Knightley version, the new Masterpiece Theatre version, the Bollywood version, the Mormon version). We love the characters, but we know what's going to happen. Shocking endings are pretty much nil after the first delighted read, so for me it was a supremely unexpected pleasure to enjoy the characters with a returned sense of surprise and suspence (and also to yell and shout at the screen during particularly scandalous developments).

And, even though she causes irrevocable havoc with the storyline, I liked Amanda Price (played by Jemima Rooper). While she's pretty much a walking culture-shock punchline for most of the first two episodes, by the halfway mark, with the surprising aid of a character whose name I shall not reveal (it's funnier if you find out for yourself), she gains some footing in the culture and fakes it well enough to let off some hilarious one-liners and commentary. While she initially enters the novel with all the lovey-dovey feelings for Darcy that repeated watchings of Colin Firth will provoke in a woman, she encounters the harsh truth that it is infinitely easier to read about an overbearingly rude gentleman like Darcy than to experience the blunt edge of his overbearing rudeness in person.

Lost in Austen is not an adaptation, but rather an homage, not only to Jane Austen, Pride and Prejudice, and Colin Firth (whose portrayal of Mr Darcy inspires a very special visual reference), but to the readers and rabid fans of her novels. How many times have we read her books with the desire to confront her characters face to face with what we know about them? To experience the period for ourselves, with all of its merits (dresses!) and flaws (Regency toothpaste = salt + chalk)? To marry a man with a comfortable income who doesn't have to work evenings and weekends for it, or at all for that matter?

Take my advice - put on a fluffy bathrobe, grab your comfort foods of choice, and plop down on the couch with a copy of Lost in Austen - a miniseries that's witty, insightful, shocking, and unabashedly romantic. A++
Posted by AnimeJune at Monday, December 29, 2008

Labels: A Plus Plus Reviews, historical, Reviews, Romance, Television