Okay, so people familiar with my archived posts know that I used to review movies I saw, but I kinda dropped out of doing that as I started to focus more on book reviews. Well, now that I recently got a job at a video-rental place and now can rent several movies a week for free, why not write reviews of the romantic comedies? I have noticed that I tend to evaluate romantic movies differently now that I'm an avid romance novel reader, so let's see if I can review movies in a similar fashion. 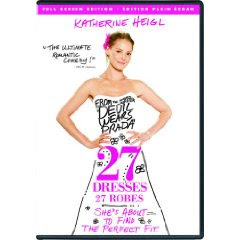 The Chick: Jane (IMDB gives her no last name, and I can't remember it). Jane is the ultimate bridesmaid - organized, responsible, and with a slight enough figure (and sense of dignity) to fit into just about any bridesmaid dress. She lives to organize and experience weddings - and she should know, she's done it 27 times.
The Rub: Her own love life is sliding rapidly from bad to worse - she's helplessly in love with her oblivious boss. The same boss who falls in love with and proposes to her sister. Who wants Jane to put on her 28th dress for their wedding. Awkward.
Casting: Katherine Heigl.

The Dude: Kevin. A cynical writer tearing his hair out writing wedding announcements for the newspaper, he sees an opportunity for a story when he catches on to Jane's particular hobby.
The Rub: His growing affection for her poses a serious conflict of interest, but he needs this story if he wants to get out of writing descriptions of wedding receptions and bouquet tosses.
Casting: James Marsden.

Jane: I love my boss!

Kevin: I hate my job!

Jane: I secretly hate my sister!

Kevin: ...and I secretly wrote a story about you.

Jane: LESS hot. But I'm over it! Let's get married!

1 Use of PowerPoint as Revenge

The Word: Jane loves weddings, and has ever since she was seven and a bit of quick-thinking on her part earned her the appreciation of the bride and a place in the wedding party. Ever since, she's been the go-to gal for her friends and coworkers who need someone to help organize the flowers, dress fittings, music, and showers. She thrives on the romance of the occasion, even if the scheduling can get a bit tight.

Kevin, a jaded journalist who's attending a wedding on an assignment (he writes the Wedding Announcements for a newspaper), notices Jane mysteriously disappear and reappear at odd moments during the reception and, following her, discovers she's actually attending two weddings at the same time - as she's a bridesmaid for both. Sharing a cab afterward, he confronts her on this and the two have a little spat as Kevin's distaste for the gaudy wedding industry lies at painful odds with Jane's worship of it. When she forgets her datebook in the cab, Kevin reads it and realizes that being a bridesmaid is more than an occasional commitment for her, but a genuine hobby.

Unbeknownst to him, after the hideous pastel-coloured gowns and centerpieces are tucked away, Jane's life isn't exactly a party. She works full-time as a personal assistant to a genial CEO whom she's secretly, desperately in love with. When her vapid super-model sister flies in and effortlessly catches her boss's attention, eventually resulting in a whirlwind courtship and proposal, Jane starts to come apart at the seams - especially now that her sister wants her to be the bridesmaid for their wedding.

As Jane's slowly losing it, Kevin comes around to return her datebook (and to write the announcement of her sister's wedding), and also to confront her on her bridesmaid addiction. Secretly, he's planning to write a story on it, hoping it will finally boost him out of the Wedding section at his paper where he's slowly been going crazy writing the same gooey wedding descriptions he says he hates.

However, the opportunity to reveal and discuss her lifelong passion restores some of Jane's mental health. While her infatuation with weddings isn't a secret, it's certainly a private part of her life that she doesn't advertize, and she gets a kick out of showing Kevin the (yup, you guessed it) twenty-seven bridesmaid dresses. She's worn tacky cocktail dresses, crinolines (for theme weddings), tuxes, spiked collars, saris, you name it, in every unflattering colour of the rainbow, and she's kept every piece until her closet's overflowing.

I really, really enjoyed this movie. Maybe more than I should have. I watched this with my mother, who gleefully insisted on correctly predicting every important plot scene. Formulaic? Yes. But I've noticed that it's easier to notice the formula in romantic movies than in books because it's a shorter format and deals with a smaller time frame, so I wasn't bothered by that.

What especially wowed me about this movie was the symbolism and the acting. I thought the symbolism of the bridesmaid fit perfectly with Jane's character. She's a bit of a control freak, but at the same time is afraid to control her own life - as a bridesmaid, she revels in organizing the wedding arrangements and making sure everything is just-so, but in the end she's still at the beck and call of the bride.

Similarly, by being the Ultimate Bridesmaid, Jane also settles for being the bridesmaid for her own life - she's always sitting on the sidelines watching, listening, and living vicariously through other people. She's always supporting and helping others but she never does anything for herself. While she does a lot of good (I started to wonder why she didn't start a wedding-planning business!) and thinks she's being considerate, Kevin recognizes that she's made herself into a bit of a doormat because she's too scared to reach out and try to grab something for herself.

Kevin, meanwhile, is a secret romantic who shuns romance because he believes it's just a front. He despises the lace and the sparkles and the taffeta, and the Big Giant Deal that society has transformed weddings into. His own marriage fell apart when his wife left him for his college roommate, and his heartbreak has taught him to hate the superficial gaiety of weddings that, he believes, only hides and obfuscates the truth, and maintains the idea of romantic fulfillment where none exists.

The kick is, I agree with both characters. I don't believe there's anything wrong with celebrating weddings, because they are a happy event that is supposed to unite two people for the rest of their lives. At the same time, the movie does a good job of showing how the expensive wedding industry, which encourages glitz and glamour and overindulgence, misses the point.

Now, for the acting. Katherine Heigl is amazing. She maintains a great balance between comedy and drama - portraying Jane's slow, desperate unravelling as her life comes apart in a truly sympathetic way while keeping it just light and exaggerated enough to maintain the humour and prevent her character from seeming too pathetic. After all, Jane is the character who's saddled with the movie's gimmick (she's been a bridesmaid 27 times! And keeps all the dresses!), and Heigl has to work harder to sell her as a character who's unique and eccentric while at the same time understandable and relatable.

Meanwhile, James Marsden is just fine (in every sense of the word). His Kevin is funny and rakish, and brings Jane down to earth even as she brings buoyant optimism back into his life. While his character is more conventional (to quote Jane: "How original - a man who's not a fan of marriage!"), he's a good match for Jane, and super-hot to boot. There's a scene where the two are stranded (and drunk) in a sleazy bar during a rainstorm and Kevin starts singing to the jukebox, that is worth the price of the movie rental alone. Plus, I feel I should point out that it is very refreshing to see James Marsden in a movie as the guy who actually GETS the girl, ending his streak of movies where he plays the Perfectly Decent Guy who Nonetheless Ends Up Romantically Shafted (see: The Notebook, Enchanted, X-Men, Superman Returns).

Yes, 27 Dresses is a bit formulaic at times, but it's still an excellent example of a heartfelt, honest, and amazingly uncontrived romantic comedy with great characters, great actors, great writing, and more importantly, great romance.
A-