Well, on Wednesday, I woke up bright and early (or as brightly early as a foreigner in a time zone two hours ahead of her own can be) and (after I ordered room service breakfast, as mentioned in a previous post) registered for the conference. Upon the registration, I received a first taste of what would be a heady and addictive thrill at the National Conference: free stuff. With registration, I got a gorgeous totebag with this year's logo and the pictures of old-school Harlequin covers on it, a totebag that came complete with program, flashdrive (containing workshop handouts and free e-books), and six free novels. Awesome. After registration I headed to the goody room.

I'd been warned beforehand about the myth that the goody room is a room of free books. It's not - the goody room is a promotion room, where authors and publishers drop off promotional materials for the taking. The materials can be books (I found Sophie Jordon's Sins of a Wicked Duke there), but more often they're beautiful bookmarks, pens, magnets, postcards, cover flats and excerpt booklets. There's something for everyone and it's updated regularly. Really, it's like a treasure hunt - if you check it once or twice a day, you're bound to find something interesting. 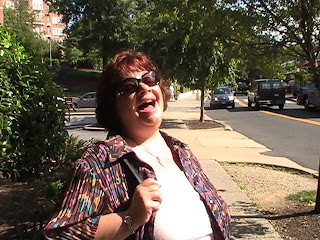 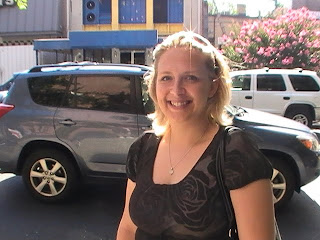 After goody-ing up, I went sightseeing with Kristie J and Barbara (Kristie J is the one who's laughing, and Barbara is the blonde). Kristie J had already been on the bus tours but they decided to try and get a closer look at some of the sights so they followed my lead. 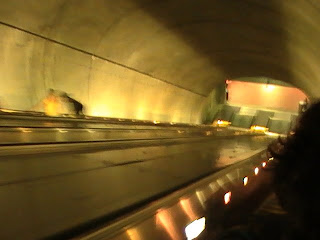 I do like to be prepared, so beforehand I'd researched the fantastic Washington Metrorail and its various stops and plotted an easy and relatively cheap route to the National Mall. The ride was smooth and uneventful except for that first escalator ride to the bottom - it was so long and steep it was a little frightening!

We made it to Smithsonian station and rose up into the sunlight. The weather that day was flawless - hot and clear, with the giant Washington monument that has to be seen in person to be really appreciated looming over everything. 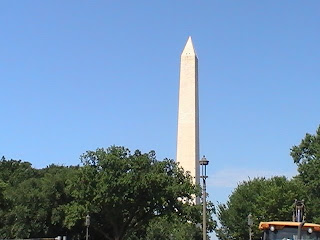 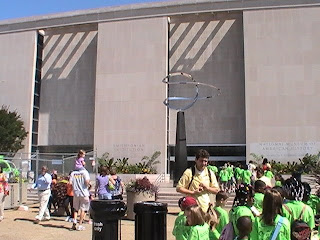 We decided to hit the National Museum of American History first. It was pretty interesting. It had everything from the personal items of the US's first presidents to Seinfeld's Puffy Shirt to the original Ruby Slippers. 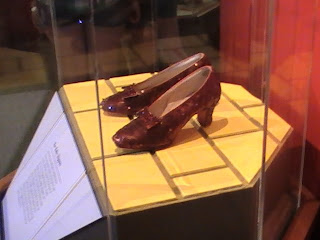 We went through nearly the whole museum, and by the time we left Kristie and Barbara were beat and decided to return to the hotel. I considered going with them, but I figured it's a public place in the middle of the day and I'm only going to be young once, so I decided to trek all the way from the Museum of American History to the Lincoln Memorial and back. First I had to pass the World War II Memorial. 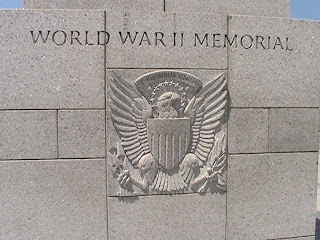 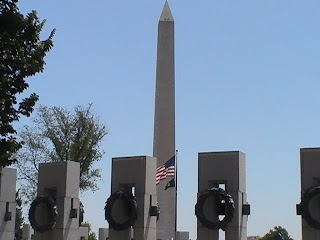 I'll admit I sniffled a little at the WWII Memorial. I mean, my great-grandfather fought in the war, but he didn't die there and other than that I don't really have personal ties to WWII. It was a beautiful memorial, though, and new. It was made in 2004 and there was a lot of controversy because some people thought its construction would impede the view of the Mall.

Kept walking though - the weather was great and I drank a lot of water. Still, it was a long walk. By the time I approached the Lincoln Memorial, I realized, "Oh crap. STAIRS." 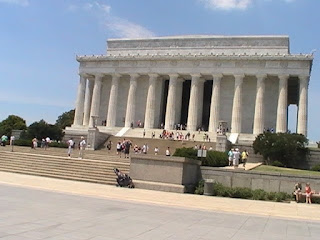 And yet somehow I made it up there to photograph more beautiful views, if that's even possible. 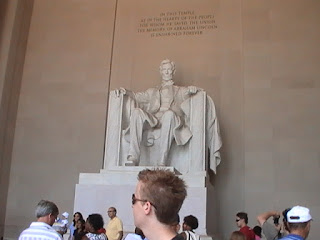 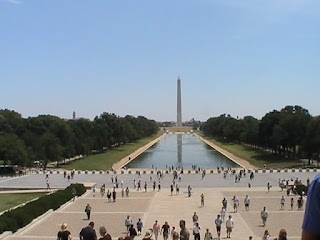 Then, of course, the problem came when I had to come back down and walk all the way back to the Smithsonian Metro station. Thankfully on the way I was pleasantly distracted by two more monuments - the stunning Korean War Memorial and this beautiful temple that I can't identify but I'm sure is something important (I'm Canadian, sorry - does anyone else know what it is?). 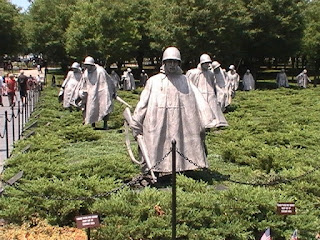 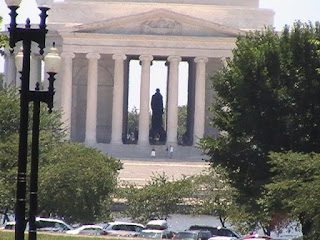 After I returned to the hotel I had a shrieking headache so I crashed in my room, ate junk food in bed (a unique hotel perk), and slept until the Literacy signing, where more awesomeness occurred! In case you're unaware, the Literacy Autographing at RWA National is a huge charity event where 500 authors get together in one room, their publishers donate books, and fans walk up, talk to the authors and get the books signed before buying them, with the proceeds going to a literary charity. There are also raffles and prizes for further fundraising. I had a great time at the signing, and here's who I stopped by to see: 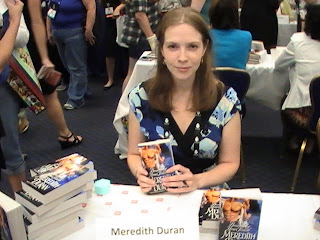 Meredith Duran. She is awesome. Going to RWA helped me discover that about authors I haven't even read yet. She wrote Duke of Shadows which set the blogging world on its ear and from what I hear this new book of hers I got, Bound By Your Touch, is just as good. I didn't just meet her at the signing, however - we ended up running into each other surprisingly frequently during the conference. 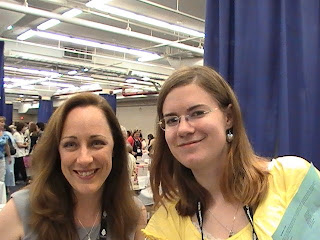 Gaelen Foley. I finished The Duke and I loved it, so of course I had to track Gaelen Foley down at the signing and get a picture as well as a copy of her newest, My Wicked Marquess. 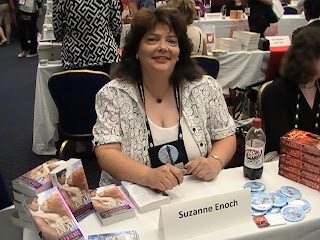 Suzanne Enoch. I loved After the Kiss, so I decided not to buy the last book in the series (Always a Scoundrel) on purpose so that I could pick up a signed copy from her in person. 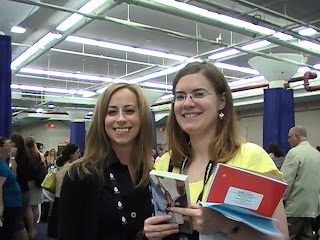 Julie JAMES! Again, her latest (Practice Makes Perfect) was a book I held off on buying because I was looking forward to getting it at the signing. Seriously, Julie James is just plain fun to hang around - we totally ended up in similar circles during the conference. 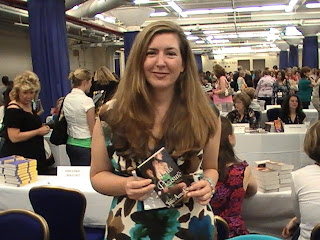 Julie Anne Long. She is probably the author I gushed the most embarassingly at. I love her writing style. Love it. Tried to make that clear in sixty seconds or less. Whether or not it worked is a secret only she knows. 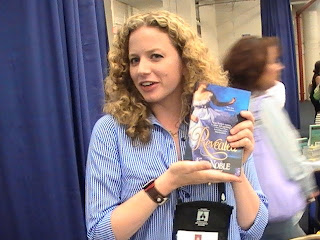 Kate Noble. Blame the Booksmugglers for this - they hyped her two books so well I knew I had to get me a copy - or two (beta heroes? Yes please!). She seemed surprised I wanted to take both, but hey - more for charity! 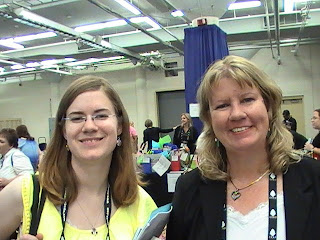 Bonnie Vanak. I'm unfamiliar with her work (but familiar with her blog), but Kristie J recommended I swing by her table and drop a word or two because Bonnie Vanak is, as Kristie J insisted, Very Good People. To prove it, Ms Vanak not only sold me a copy of The Lady and the Libertine, but also gave me a free copy of Kristie's favourite book, The Panther and the Pyramid. I mean, wow. She is Very Good People. 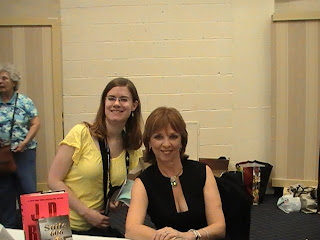 Nora Roberts. I didn't actually get one of her books (Blue Dahlia remains on my TBR *sigh*), but I did ask for a photo because she's one of my Granny's favourite authors and I knew Granny was feeling down. 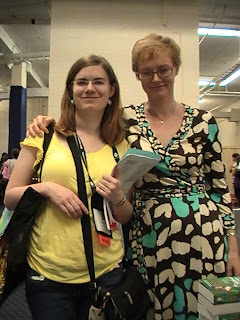 Eloisa James. I already admired Eloisa James for her novels, her columns, and most importantly her latest responsibility as the poster child for literate, Ivy-league educated romance readers, but her luncheon keynote speach on Friday was a thing of beauty (I'll explain more on the Friday post). 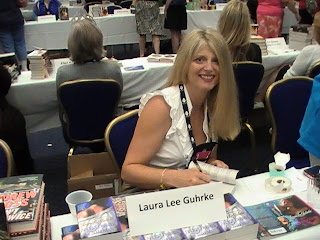 Laura Lee Guhrke. Meeting her was a blast. I told her I'd packed one of her older books on the plane (His Every Kiss) and she explained how she'd been inspired by listening to an interview with William Shatner (who suffers from tinnitus, same as the hero from Kiss), and so I should keep eyes open because I'll never know when a good story idea comes along! 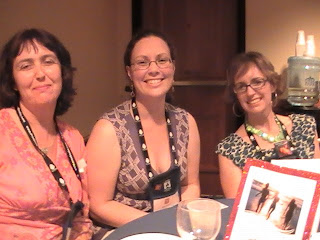 But, amazingly enough, that's not all! After this long, exhaustive day I went to the RWA Online Chapter party. I met some really astoundingly kick-ass people - from Marguerite and La-Tessa (whom I would also meet at The Gathering the next day), to Jamie and Jess (middle and right in the photo - I'm sorry to the lovely woman on the left, but I forgot your name! -_-). I also won some free books and a Barnes and Noble gift card!

After the party, though, I allowed myself to stumble into bed. Amazing - other than my nap, I got almost no downtime, and the workshops hadn't even started yet!
Posted by AnimeJune at Sunday, July 19, 2009