"Your Scandalous Ways," by Loretta Chase 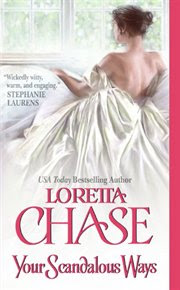 The Chick: Francesca Bonnard. Her husband divorced her, society turned its back on her, but she refused to die in the gutter and instead became one of the most expensive and celebrated courtesans in Europe.The Rub: Her independence is threatened when shady men with shadier intentions start sniffing after some incriminating letters of her ex-husband she may or may not have stashed away...Dream Casting: Anne Hathaway.

The Dude: James Cordier. Before his superiors let him retire from the spy game, his last job is to retrieve some letters by any (sexy) means necessary from a courtesan in Venice.The Rub: He's a master of seduction and secrecy who's just looking to settle down with a nice, uncomplicated virgin to marry - too bad he starts falling for Francesca, the very opposite.Dream Casting: Eric Bana.

The Plot:
Spy Superior: Go and steal some secret letters from a famous courtesan!

James: *rescues* Hello, pretty lady. I am a totally trustworthy noble who is totally not trying to steal letters you've been hiding from the British authorities!

Francesca: Why thank you! Care for some free sex?

James: *so very tempted* Yyyyyyyyyyyno. No thank you.

Francesca: How DARE you refuse me! I'm awesome and expensive! Watch me go and have an affair with a boyish innocent prince!

James: For the love of all that is holy, Fran, would you give me those letters and have hot, semi-violent sex with me?!

Francesca: In that order? Wait, how the hell do you know about the letters? YOU LIED!

Francesca: I STILL WANT TO HAVE SEX WITH YOU BUT BECAUSE I'M HEAD BITCH IN CHARGE I'MMA JUMP OFF THIS BALCONY AND MAKE YOU DRAG ME OUT OF THE CANAL FIRST!

Evil Sexy Villainess: Well fine then. Rude. *jumps in canal, and is unrescued*

1 Instance of a Hero in Drag

Thank God for Loretta Chase. I think one of the reasons I love her books is that in each one, she manages to break or at least challenge one of the Major Rules of Romance and get away with it.

No, she's in it for the dolla dolla bills. And maybe a little payback. Francesca used to be the naive wife of an ambitious politician, until he decided he was better off without her. The ensuing divorce proceedings stripped her of every scrap of reputation, good name, and friendship she had. Knowing her ex-husband fully expected her to sink into impoverished, diseased obscurity - she threw herself in the opposite direction, turning herself into a celebrated, fabulously wealthy courtesan, the toast of the Continent.

James Cordier, an experienced British spy, has also earned enough of his pay on his back to apply for Francesca's union. He's had to play so many parts to save the British Empire from certain doom, that he wants nothing more than to retire and settle down with a nice, virginal English bride. Too bad he's got one last job: a powerful member of Parliament may be a traitor, and his now-infamous ex-wife may possess letters that prove it - and James needs to get those letters.

However, James is not the only one after those letters, and he ends up rescuing Francesca from hired assailants. So now he must juggle the daunting tasks of Protecting Francesca, Finding Those Damn Letters, and Avoiding Francesca's Wiles - and Francesca throws wiles like it's her job - oh wait, it IS her job!

Francesca is a fantastically involved character. She's not only an experienced whore, but she actually enjoys the life she leads and all the luxuries that come with it. None of this "secretly I cry myself to sleep in the shower trying to wash my soul free of sin" nonsense. While yes, she does harbour a small, secret yearning for England and the life she used to lead, she relishes the independence she traded it for and balks at the idea of giving it up for any reason, even her own safety.

But James? He's all about the protection. He can't understand why this stubborn woman won't let him swoop in and take over everything like the Captain Britain Superhero he's used to being. But she's not one to sit quietly by and sip tea while James does all the legwork. James is so used to going alone, or with the aid of women he seduces and manipulates, that he's engaged and enchanted by this woman who refuses to relinquish her hold on life - even if it's for her own damn good, the silly wench.

And honestly, I loved every minute of it. This whole book seemed, well, sumptuous. The descriptions, the dialogue, the setting of Venice - Loretta Chase's writing style makes reading this book like running one's hands down a string of pearls - each word smooth, polished, beautiful, just the right fit for its place, all running together into a luxuriant, rich piece. I don't know how else to describe it, for my own words fail me. But Chase doesn't stop with words - you feel for all her characters (Francesca in particular), their development and romance.

Your Scandalous Ways is perfect indulgence - the kind with substance along with style.
A+
Posted by AnimeJune at Sunday, July 31, 2011