"I'm Not Her," by Janet Gurtler 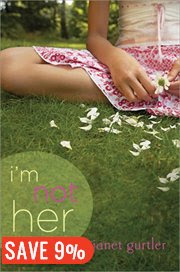 The Heroine: Tess Smith. A misunderstood teenage outcast with an insanely popular older sister who sucks up all their parents' attention. Stop me if you've heard this one before.
The Rub: The insanely popular older sister gets cancer, has an painful identity crisis, and their parents both decide to check out early from the Responsible Parenthood Hotel, leaving only Tess to try and make sense of things.

The Secondary Cast:
Kristina: A star athlete with a guaranteed future ahead of her - until she gets cancer and has to change her whole outlook on life.

Mr. and Mrs. "Parents of the Year" Smith: One's a boozy perfectionist, the other's a professor with a Ph.D in avoidance. Neither of them know how to handle their older daughter's cancer or how to nurture their younger daughter's genuine artistic talent.

Simon: A troubled senior with *~brooding problems~* who nevertheless befriends Tess in her hour of need.

Clark Trent: A Hot Nerd with an unfortunate-sounding name who also befriends Tess in her hour of need, in a much healthier and more productive way.

Jeremy: A younger kid with a serious crush on Kristina, and a past that brings him closer to her than any other boy.

1 Shocking and Yet Manipulative Character Death

The Word: If someone had explained to me, on paper, what this book was about and what happened throughout, I would never have read this book. I would have put it down without a second thought, believing that I would never enjoy anything so relentlessly depressing and only mildly hopeful at the end.

But then I would be wrong. Now, I didn't luuuurve this novel, but honestly, I was just so surprised that I kept wanting to read to the end that I thought I would point that out as notable.

Tess is a bit of an oddball. She's plagued with low self-esteem because her older sister Kristina is gorgeous, outrageously popular, and has an Olympic-sized volleyball dream that their mother supports 110%. Meanwhile, Tess is bony, red-haired, and neither of her parents believe her artistic aspirations will be anything more than a hobby. She's used to being invisible at school, ignored by all in favour of her more popular sister. Her only friend is a chubby, vindictive fellow outcast with whom she loves to snipe and bitch about their despised sisters.

But then Kristina gets The Cancer. And it sucks, big time. As she gets chemotherapy and starts fighting her illness, she drops off the social grid entirely and swears Tess to secrecy. No dice - it takes all of five seconds for the school to realize Kristina's missing and the only source they have for information is Tess. Soon, Tess becomes the most visible girl in school, as everyone from Kristina's volleyball friends to her sort-of, maybe boyfriend starts hanging around Tess to find out how Kristina is doing.

And Kristina gets worse. And their parents flip out - Tess' dad detaches from the family entirely, and her mom busies herself with wallpapering over all their real problems to try and make up for the fact that the future she's imagined for her daughter will never take place. It's pretty heavy stuff.

And I kept reading. There are breadcrumbs of hope, scattered here and there. They are pitiful and small, for the most part, until they slowly, eventually, form into a cohesive message. I think the point of the book is that the fact that Tess doesn't fly entirely, completely to pieces beneath the full pressure of shitful fate is supposed to be some kind of victory. Her parents break, and Kristina breaks, and the popular kids reveal whose side they're really on, and through this Tess learns to develop an identity separate from other peoples' approval, as she discovers how little she can trust those people in a tough situation. Which is a message that's as depressing as it is uplifting.

Ultimately, though, this book was kind of a mixed bag for me. While the dramatic, tragic parts were handled in a painful yet evocative manner, the positive bits were all over the place. We get a lot of different characters who aren't all fleshed out with the same amount of sensitivity and detail. Tess's spiteful friend, for instance, gets the short shrift, turning into a sour, one-note villain. I couldn't understand why they were friends in the first place. As well, some of the plot points come across as contrivances to force more pain or negative pressure on the heroine to see how she develops from it, only it doesn't develop in an organic way. A shocking character death near the end of the novel is brought in so clumsily and obviously that it's almost funny in how blatant it is, and that kind of ruined the effect and gave the novel a cancer-opera feel similar to a Lurlene McDaniel novel.

While it wasn't a terrible novel, I wouldn't read it again, nor would I know who to recommend it to. The gains to the heroine and the message of the novel itself are fairly standard, and seem paltry compared to the bleakness of the majority of the book. Perhaps teenagers and people who've struggled with cancer (or with a family member who had it) will get more out of this novel than I could. To me, it was like medicine: useful, well-made, but not a voluntarily enjoyable experience.
B-.
Posted by AnimeJune at Thursday, December 22, 2011