"Catch and Release," by Blythe Woolston - Review and Giveaway 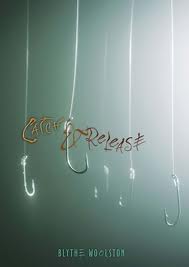 The Protagonist: Polly Furnas. When seven people in her hometown, including her, contract a devastating illness, only she and her classmate Odd remain living.
Her Angst: Defining the word "living" becomes more complicated for Polly as her illness leaves her horrifically scarred. To escape her depression and apathy, she and Odd embark on a two-day fishing trip that takes a series of random detours.

Odd: A football player a few years younger than Polly who also survived the outbreak. Suffers from an overabundance of angst and severely impaired impulse control.

Polly's Mom: Used to be incredibly close and supportive of Polly - until Polly's illness made her incredibly overprotective and smothering.

Bridger: Polly's boyfriend, who promptly ditched her after she recovered.

Angst Checklist:
The Word: First things first, I would love to thank the wonderful Blythe Woolston - I remember reading an amazing excerpt of her novel Catch and Release over at Forever Young Adult and I made a comment on Twitter on how good it sounded. Nothing surprised me more than when she contacted me on Twitter and asked if I would like a copy to review. I happily accepted.

Second things second - I realize that the novel's title includes an ampersand, but Blogger formatting is being a fussy bitch, so for the purposes of a clean review I'm spelling it with an "and." Just in case you are fussy about that sort of thing as well.

Polly's life and identity are divided in two - the Polly-That-Was of the past who was a cheerful overachiever and beloved girlfriend, and the "monster" she became after surviving an outbreak of MRSA (resistant flesh-eating bacteria) that killed five other people. Polly survived, but at the cost of her right eye and cheekbone. Her spineless boyfriend broke up with her before fleeing to college, her dream of working with children is now impossible, and now she's stuck at home in a kind of numb, emotional stasis with her overprotective mother.

The only person she can stand to be around is Odd, a football player a couple of years younger than her who lost a leg to the MRSA outbreak. When Odd asks her to come with him on a fishing trip, Polly decides action is better than inaction and agrees. However, Odd is not in the most stable, rational, or healthy frame of mind and their two-day fishing trip takes a lot longer and ostensibly leads them on a journey of self-discovery.

I say "ostensibly" because, while Woolston's writing style is stellar, I had a hard time connecting to this book or the characters.

My dissatisfaction with this novel comes from the fact that I'm a big-picture girl. I like knowing the backstory and getting a glimpse into the future. However, Catch and Release is very much a book that lives entirely in the present. What little we do come to learn about the characters' backstories and what kind of people they were before MRSA, come to us in flashes and glimpses - and the future itself remains frustratingly blank.

Catch and Release is also a deeply introspective book. Polly is forced back into the world of the living and has to confront in practice what she's only been learning in theory: that life will never be the same for her thanks to her deformity, but that it still goes on. In that sense, I appreciated the random, meandering pace of both the narrative and the roadtrip itself - from what we know of Polly-That-Was, she planned everything out in advance, from her school projects, to her career, to her "perfect" relationship with Bridger. Having all of her plans pulled out from under her by the horrifying results of her illness left her almost immobile with apathy - so her recovery comes from following Odd's seemingly directionless, last-minute, impulsive itinerary.

While Polly is a realized, immediate character, Odd was ... not. He's like the Dude Version of the Manic Pixie Dream Girl Trope, and while this may be a double standard, having the unstable, unpredictable, crazy-troubled free-spirit be a guy ended up being kind of terrifying, particularly in the claustrophobic nature of the narrative (Odd and Polly are the only real characters with dialogue in this story). And when he's not terrifying, he's gross and a jerk. Odd has serious problems and there were several points in this story where I felt Polly should have gotten out of the car and walked away - preferably to the nearest gas station with a ladies' bathroom and a phone.

Ultimately, the story felt a little unfinished - again, I'm a big-picture girl. I like to have an idea of where the characters are going to end up, or how they're going to live their lives now that they've resolved their issues, and I didn't feel like I got that with Catch and Release. The story definitely indicates that Polly learns life is still worth living - but doing what? I wanted to know what Polly felt about doing with her future - what did she want to do now? What had she learned? What were her new dreams and motivations? The novel lacks this, and thus the ending felt abrupt.

That being said, the writing style is sleek and evocative - the style of writing is actually what attracted me to the novel in the first place. Woolston creates a wonderful sense of setting and environment as Odd and Polly explore new fishing grounds.

As it is - Catch and Release is a pretty good example of a book that is by no means terrible, but simply isn't to my taste. The writing is excellent, and the character-building (at least on Polly's part) is subtle and clever. That being said - focused, introspective character pieces aren't my particular cup of tea. But that doesn't mean it can't be yours - read below.

Blythe Woolston very generously provided me with an extra copy of Catch and Release to give away to a lucky reader! To enter, simply comment below on where you'd like to take a roadtrip - or if you've already had a bitchin' roadtrip, what was the most interesting part? Contest is international and open until Sunday, May 27th, so go crazy!

Or, if you're weird and you'd rather pay to read Catch and Release, you can purchase it here.

Labels: B- Reviews, contemporary, giveaway, YA