Yes, I know, I'm late to the Book Expo-recounting party, but I was so twitchy and exhausted and wired when I got home that I wouldn't have been a very good party guest. Instead, I've spent a couple of days resting and getting my bearings instead of taking a swing at the enormous Book Swag Post pinatas like the rest of my peers.

But it's time to get my party hat on!

I flew into Newark on Tuesday - despite my delight at having a direct flight to Newark instead of a host of transfers and connections, my nerves got the better of me and by the time I landed in New Jersey and boarded the train to Manhattan I was gulping and praying and wondering if this whole trip was a huge mistake. A conversation bloomed behind me between two strangers, stemming from a mutual complaint about a nearby sleeping passenger who was taking up two seats, and it led to a contest of oral autobiographies as each stranger catelogued the development of their lives. One was an employee of New Jersey Transit, an immigrant from Kenya and former NYC police officer. The other was a devout Christian, who had travelled the world and survived cancer, to boot.

It was pretty amazing how freely people were willing to share their lives on public transit to someone they would likely never see again, and listening to them calmed me down immensely and brought me back to reality.

I arrived at Penn Station and met my crazy-amazing roommate from Red House Books - Emily! Emily was seriously the best roommate. Every time my anxiety made me fizz and shiver and threaten to spiral around the room like a wildly deflating balloon, she was there to prod me into trying new experiences, or share a joke, or talk about how much we both love YA novels. I'm overjoyed that our meeting on the internet resulted in real-world friendship instead of murder.

After meeting at Penn Station, we cabbed back to our hotel - the Best Western Convention Center Hotel. This Best Western was good in itself - compact, spotlessly clean - and good in regards to its location to the Javits (a three-minute walk away) but rather disgusting in regards to its location in general. The hotel stuck out like a freshly-washed thumb on a particularly filthy hand whose other fingers comprised some greasy auto body shops, a strip club, the type of abandoned-looking brick warehouses that superheroes use as their secret lairs, and a mews for carriage horses. Because who doesn't want to watch some naked ladies while waiting for their car and/or horse to be fixed?

And I haven't even mentioned the train (the choo-choo kind, not the subway kind) that passed beneath the hotel at regular intervals during the day and night.

First on the schedule after unpacking everything was the SimonTeen Blogger Party. It was the first such publisher party I had ever been invited to at Book Expo, and I was excited. We walked to our destination, which turned out to be a lounge outfitted in My Little Pony shades of purple, red, and pink, where raspberry-coloured light refracted off of a giant crystal chandelier. The bartenders served pink cocktails freshened with chunks of watermelon, and over-enthusiastic waiters wandered freely, jabbing platters of sliders and chicken kebabs at guests as if trying to rob people with them. Your money or your juice cleanse!

Shyer guests could always retreat to the fancy bathroom, staffed by an attendant whose primary tasks were to to hand you a paper towel and pretend you hadn't already dried your hands on the toilet paper in confusion after finding no dispenser in the stall, and gesture obliquely towards a table laid with the traditional American post-bowel-movement delicacies - mint Lifesavers, chocolates, and Tootsie Pops. 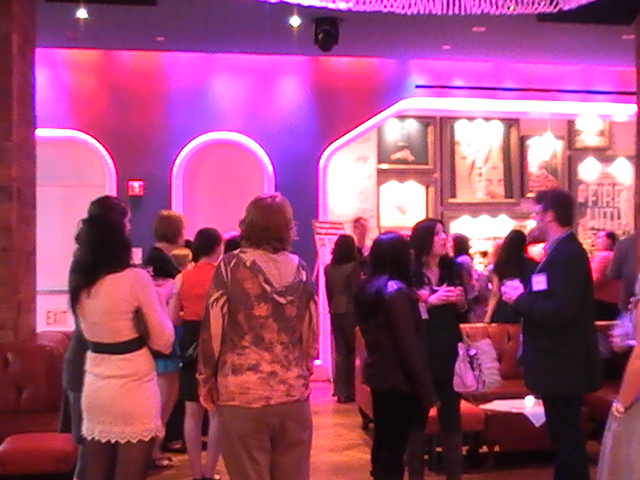 I spent the first half hour of the evening chatting with authors and SimonTeen staff - most of them gorgeous, bird-boned 24-year-old publicists and marketing reps with chunky earrings and horn-rimmed glasses who might as well have walked straight out of a Wednesday night CW drama about the New York publishing industry. I also ran into a hugely pregnant and awesome Siobhan Vivian and exchanged some complimentary words on her deft use of unlikeable and difficult female protagonists (I quite enjoyed Not That Kind of Girl).

After that, we all sat in front of a stage while Suzanne Young interviewed fellow SimonTeen authors Cat Patrick, Jason Reynolds, Jenny Han, Siobhan Vivian, Corey Ann Haydu, and Amy Butler Greenfield about their upcoming books. Suzanne Young was a lively and effective interviewer - allowing the authors to answer probing questions about the underlying themes of their works while also keeping the tone light and the pacing quick. The authors themselves were all hilarious, charming and well-prepared - I found myself envying Siobhan Vivian and Jenny Han's easy friendship as they discussed the collaborative process of writing Burn for Burn, the sequel Fire with Fire, and the final novel Ashes to Ashes (currently being written). Jason Reynolds was also ridiculously charismatic as he recounted his various financially-challenged adventures trying to become a successful writer in New York.

After the interviews - it was back to scintillating conversation! I met up with some truly awesome bloggers, including Amy from Good Books and Good Wine - she was worried that her voice was giving out and she wouldn't be able to speak at her panel at the Book Blogger Con the next day. But she still summoned enough energy to commiserate with me about bad author behaviour!

All in all, I would call the event a success - I left the party with Emily fully interested in nearly all the books discussed, which made it all the lovelier when our complimentary goody bags came stuffed with those very books! We got swag before the conference even started! How's that for thinking ahead?