Happy New Year, readers! We've been through how I did as a reader and reviewer, but 2013 was also a really good year for me in terms of writing.

In 2013, I wrote 4 articles for Heroes and Heartbreakers:

The biggest writing event for me, however, was selling The Duke of Snow and Apples (my genderbent retelling of Snow White) to Entangled Publishing! Yes, 2013 was the year I became a published - er, to be published author! Before you ask, it's coming out this year, but I have no idea when yet. We will see!


So 2013 was an interesting year overall. I took some time in the summer to recap Fringe, Veronica Mars and Downton Abbey - although it wound up taking way more effort and time than I'd anticipated.

I went to Book Expo America for the second time, and I had an amazing roommate for it. I also got to meet my favourite author Alice Hoffman in person - and Jim Carrey! Extremely blurry Jim Carrey. 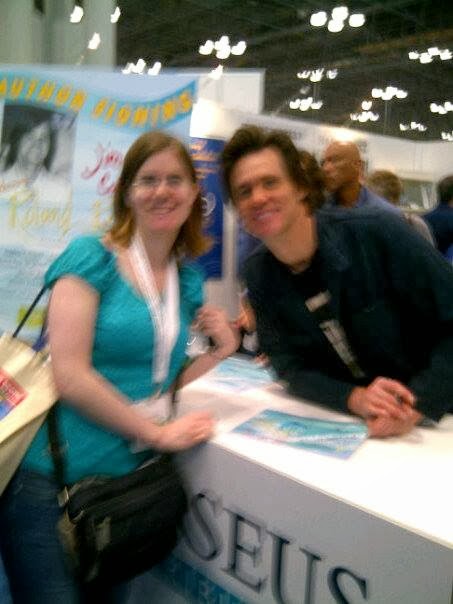 The Year to Come
As some of you may know, I've been blogging for a while. Going on ten years this June. I started out whining about my parents, then reviewing romances, and then I expanded to reviewing literally every book I read. I loved doing it, it strengthened my writing and editing skills and introduced me to a wonderful community of fellow bloggers, book lovers, writers, and publishing industry professionals.

However, for the last couple of months, blogging has started becoming a little overwhelming. What with my paying job, my non-paying publishing intern position, and my attempts to actually write another book of my own, my schedule has gotten pretty tight. I've had trouble juggling all these different responsibilities and while blogging has always come easily to me, it still takes up a huge chunk of my time. The average book review can take anywhere from two to four hours to write. And since I'll be starting the editing and revision process for The Duke of Snow and Apples soon, I'll have even less time.

I can't help but feel a little guilty - after all, I'm already pretty low-maintenance for a blogger. I don't have a set schedule, I read whatever I want, I don't do blog tours or giveaways or memes or cover snarks, and I've never managed to review more than eight or nine times a month anyhow. I still have so many ARCs from Book Expos gone by.

It's also difficult because book reviewing is something I'm good at and know I'm good at. I'm way more confident of my reviewing skills than I am of my fiction-writing skills. It's so tempting to just give up the editing and the novel writing altogether in order to stick with the skills I already receive positive reinforcement for. In fact, that's pretty much what I did for most of 2013 - I used my blogging as an excuse to not write fiction. Not enough time! Can't do both! Sorry, I filled my writing quota for the week raging at Everything But the Moon! My fiction sucks and my blog is awesome - so why waste time on the novel? However - if you do what you've always done, you'll get what you've always gotten. And if I want something different, I have to do something different.

For me, 2014 is going to be about abandoning the Safe and Same. I'm not giving up blogging. I'll start slow with a blogging sabbatical for a couple of months. I'll still read, obviously - and I'll still review if a book is particularly excellent, interesting, or terrible (or if I've already promised to review it). But my schedule just can't support reviewing everything I read anymore.

However, I'll keep up the snark on Twitter and star-grade everything I read on BookLikes. I'll still be more than willing to discuss which books suck donkey balls on either of these platforms. I'll still keep up with and comment on other book blogs.

So I'll still be here - just not with constant reviews.

Here's hoping for an exciting and successful 2014!
Posted by AnimeJune at Wednesday, January 01, 2014

Labels: My blog, Writing, Year End Round Up