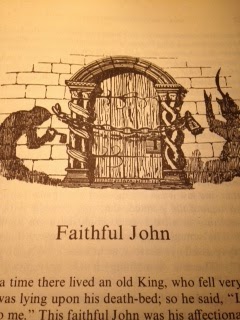 So there's this servant named Faithful John, see? And he's served the King for many years. When the Old King is on his death bed, he begs John to look after his young son. He also warns John to keep him away from the room at the end of the corridor, since it contains the portrait of the daughter of the King of the Golden Palace - a girl so desperately hot and unlucky that his impetuous son will doubtless fall in love with her and die trying to win her.

The new King's a sweet kid, but not the sharpest sword in the armoury and it's not long before he finagles his way past Faithful John. The moment he sets his eyes on the portrait, he faints dead away (likely due to a sudden rush of blood to a certain area) and wakes up in love with the daughter of the King of the Golden Palace.

So the King and Faithful John set sail for the land of the Golden Palace. With Faithful John acting as wingman, he and the King trick the Princess of the Golden Palace onto their boat with the use of shiny objects (unsurprisingly, the chick digs gold) and sail away. Thankfully for our bros, the Princess reacts to her kidnapping with a shrug and a, "It could be worse - at least you're hot."

But the King's not in the clear yet. While the King and the Princess are cozying up in the hold, Faithful John overhears three crows gossiping as they pass the ship. Marrying the Princess, it appears, comes with a curse. The first crow mentions that a horse will try to murder the King when he first disembarks. The second crow points out that if the King survives Attempted Murder By Horse, he'll likely be burnt alive by a poisoned bridal shirt that will be left in his chambers. The third crow states that if the King survives both of these, the Princess will collapse during the first dance and die, unless someone squeezes three drops of blood from her right breast.

Oh, and anyone who tries to warn the King or explain the curse will be turned to stone.

Once the ship returns to port, poor Faithful John turns into the World's Worst Wingman. First, he shoots a sweet-ass horse that appears on the dock. Then he sets fire to the King's fly-as-hell bridal shirt. The King is willing to overlook these sins because of Faithful John's years of service - until the new Queen takes a nosedive during "Wind Beneath my Wings" and Faithful John's caught copping a bloodfeel on her right boob. Wait, is that a thing? Who am I kidding, it's the Brothers Grimm, that's totally a thing.

The outraged King condemns Faithful John to prison, but when Faithful John explains himself, he turns to stone. "Oh, bummer," says the King.

Years later, the King and Queen have a pair of adorable twin boys, while Faithful John's statue collects bird poop in the garden. One day, the statue talks to the King and tells him that if he really wishes Faithful John was alive again, he'd decapitate his sons and pour their blood on the statue.

"Hmmm," says the king. "This inanimate object is telling me to murder my children so that it may live again. Seems legit." He lops off the downy, freckled heads of his innocent toddlers without delay, and lo and behold - Faithful John leaps to life like a childblood-soaked Frosty the Snowman. He also re-capitates the king's sons, because childblood makes you Jesus, and they frolic happily off to face absolutely no psychological ramifications later on in life.

To surprise his wife, the King hides Faithful John and his kids in a closet.

King: "Hey, what if I told you that we could resurrect Faithful John if we murdered our kids?"

Queen: "Well, we did get him turned into stone. Fair is fair."

The Two Princes: "Wow this is totally not going to mess us up later in life."

And they all totally lived happily ever.


And the moral of the story is: real-life consequences are for suckers.

Rating: Six beheaded babies out of ten.
Posted by AnimeJune at Tuesday, July 01, 2014