"Match Me If You Can," by Susan Elizabeth Phillips 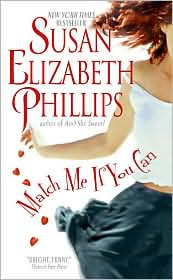 The Chick: Annabelle Granger. Born to a family of condescending overachievers, she's always been treated like the family failure for never settling down into a profession (preferably in medicine or finance). Her latest venture, taking over her grandmother's matchmaking business, needs a high-profile client if it doesn't want to end up like her other failed businesses.
The Rub: She finds a perfect client with Heath Champion - an uber-successful sports agent who wants a high quality trophy wife. Trouble is, she would rather match him up with herself - but that would jeopardize her business.
Dream Casting: Shopaholic's Isla Fisher.

The Dude: Harley D. Campione - a.k.a. "Heath Champion." Heath clawed his way up from nothing to become one of the hardest working and wealthiest sports agents in the country. Thanks to his money and success, he expects the best in everything - so to help find himself a perfect wife, he tries out a professional matchmaker.
The Rub: Heath thrives on putting out the most successful image, so he needs a mate to match - sophisticated, collected, elegant - so why is he attracted to his hot mess of a matchmaker?
Dream Casting: Nathan Fillion.

Annabelle: How about this one?

Portia: But I didn't introduce anybody yet!

Heath: CRAY-ZAY. How 'bout you, Annabelle?

Annabelle: You love me?

Portia: Don't be an ass.

Heath: Crazy McTight pants is right - I do love you.

The Word: Well, I've finally given Susan Elizabeth Phillips a try. I was introduced to her, indirectly, by the Smart Bitches who sent me an audiobook of this very novel. I have a very short attention span when it comes to listening to nothing but dialogue (especially dialogue spoken by a woman trying to imitate the sexy male voices and failing miserably), so I chucked the set after I heard one chapter, but what I did hear was enough for me to go out and get the book.

The novel opens on the worst day of Annabelle Granger's life - and hers is a life almost entirely composed of worst days. Her super-successful family (composed of bankers, vice presidents, and surgeons) think of her as the lazy, freeloading black sheep, her last boyfriend waited until they were engaged before telling her he was a woman born in a man's body, and her resume's full of failed jobs and businesses. Her latest venture is a takeover of her late grandmother's matchmaking business, and thanks to family connections (with previous SEP characters), she's landed an appointment with Heath Champion - sexy gazillionaire mega-agent, a client who could make her career.

Every possible thing that could go wrong before the interview does, and Heath almost turns her down flat, but through sheer gumption she convinces him to let her perform one introduction. Impressed by her results, he signs on as a client, although he keeps his previous contract with Power Matches, run by razor-toothed business maven Portia Powers.

One might wonder why a man as gorgeous, rich, intelligent, and charming as Heath would need a matchmaker. Heath grew up as the lowly son of the trailer-park drunk, and since attaining success beyond his wildest dreams, is very image-driven. Now that he has everything, he's built his life around showing everyone that he's got everything. He knows his wines even if he doesn't drink that much, he owns an appallingly expensive home he hasn't even furnished yet, and has a professional designer pick out everything he wears - all so that people will never look at him and think of that white trash junkyard kid ever again.

Now, however, he wants a wife - but one who will be as much of a status symbol as everything else he owns. Someone sophisticated, someone classy, with good taste and connections, someone well educated, who will nevertheless give up her job to take care of Heath and their family. Cue eye-rolling here.

He initially doesn't think Annabelle's all that up to the task - she has "train wreck" written all over her. She's open and wacky and careless, and a complete emotional pushover (after Heath heroically defends her from a bullying former client, she chastises him for being too mean), who's one issue short of a full subscription. But her empathy and quick thinking and positive attitude help her come up with a whole host of talented women for Heath to pick over, and he never attributes it to her when he can't quite connect with any of them.

The novel does an excellent job of demonstrating how Annabelle and Heath complement each other perfectly. Despite her own insecurities (and she has many), Annabelle never tries to be anyone other than herself. She wears bright colours and can communicate openly with just about anyone from stuffy seniors to overcaffeinated toddlers. She's in the process of changing her life, of trying to recover from her many past failures, but she never curbs her own sense of style and self-presentation.

Heath, meanwhile, is an example of the emotionally walled-off individual who is amazingly confident on the job and slavishly devotes himself to his work to hide the fact that he really doesn't have anyone to come home to. His empty house is a cheeky metaphor for his own inner struggle - on the outside, the house is astonishingly constructed, located in a trendy neighbourhood, and is a marvel of architecture and design. Anyone walking past it immediately assumes the occupant has money and power. Inside, however, it's empty except for the basic necessities because Heath's never had the chance to buy furniture or decorate or add any personal touches to it because he doesn't have the time.

These differences spark some intriguing reactions when Heath and Annabelle come together and realize what lies beyond the surface. Heath initially has trouble respecting a woman who makes no attempt to intimidate or impress with her attitude or appearance, but eventually discovers how well adapted and flexible it makes her when dealing with people and changing situations. Annabelle, meanwhile, is bowled over by Heath's machismo at first, but soon finds out it's all image, and that he's never bothered to reveal or explore his real self because he doesn't understand how anyone could consider it as important as his Game Face.

Susan Elizabeth Phillips also does a wonderful job of integrating character backstory without resorting to tedious exposition or flashbacks. Heath grew up in a trailer park, Annabelle's ex-boyfriend's a chick now, but these elements of pain and character-building betrayal are smoothly and subtly layered into the novel without taking up too much space, surfacing only at significant moments (such as Heath's embarrassment about his middle name and Annabelle's phobia of men handling ladies' underwear).

Also, I should point out that I've finally come across an example of the Those Three Little Words cliche done well. In this case, Heath pops a surprise marriage proposal on Annabelle. He then launches into a speech about all the little things he loves about her, but he refuses to actually say that he loves her. Everything we (and Annabelle) have come to know about Heath shows us that his refusal to say "I love you" actually does translate to "I don't love you." After all, Heath is an image-driven agent, who built his career on selling dreams. Annabelle realizes his "I love your hair, I love the way you snore" crap is a diversion, and that if he truly believed what he was selling he would cut the bull and say Those Three Little Words.

So, with all I loved, why didn't this novel get an A? All in all, I really have three main problems. The first (and least) of the problems was the presence of Annabelle's bookclub - nearly all composed of smug marrieds from previous SEP books. During certain scenes (mostly during the lakeside retreat), I felt they crowded the book and stunk a little too much of Series Perfection Syndrome. Series Perfection Syndrome (copyright AnimeJune) happens to characters from previous novels in the same series who, because they've officially already attained their HEA, are consigned to Mary/Gary Sue status if they appear in later novels as supporting characters. You've probably encountered a few examples of this - in most cases, the previous couples are still crazy in love, never so much as fight, are adorably pregnant or surrounded by adorably perfect children. Heaven forbid Mr Handsome from Book #2 should be sleeping on the couch or Mrs Fiesty from Book #3 is feeling neglected. Granted, we didn't get too much of this in Match Me If You Can, but enough of it to annoy me.

The second problem I had with this novel came from the depiction of Annabelle's family. They are singularly awful people who, one and all, make it their sacred duty to boast of their own successes while tearing down Annabelle at every turn. They wouldn't be out of place in a Jennifer Crusie novel, if that gives you any indication of how icy and self-involved they are. Many of Annabelle's painful personal issues stem from their treatment of her. However, towards the end of the novel, the author tries to redeem them without making any of them actually correct their behaviour towards Annabelle.

Granted, how this comes about is an interesting scene - Heath, invited to dinner with the Grangers, can only be impressed by them. Growing up in an impoverished home with a revolving door of stepmothers and as asshole of a dad, Heath sees the ambitious, pushy Grangers as the perfect family. From an outsider's perspective, he interprets a lot of their body language as being loving and supportive of Annabelle. However, in doing this he remains completely oblivious to all of the wretched things they are saying to Annabelle.

This remains my most painful scene to read because I sincerely hated how Heath remained so mindlessly unaware of how miserable Annabelle was. I expected him to defend Annabelle, or give the heartless, sycophantic Grangers the verbal smackdown they all deserved, or at the very least take Annabelle aside and explain to her just how little he respects their so-called "opinions." Instead, he joins them. The novel also depicts how the Grangers go into Loving Supportive Defence Mode once Heath breaks Annabelle's heart, and I nearly put the book down. What the hell? I'm sorry, but if the Grangers are loving and supportive of Annabelle when her back is turned but verbally abusive to her face, that doesn't make them a good family. That makes them hypocrites.

Finally, my last, and biggest problem with the novel stems from the secondary romance between Portia Powers and Heath's friend Bodie. Portia is a marvellously concocted character - while she starts out as an almost impossibly eeevil villain (she makes all her employees weigh themselves once a week, culling the fatties from the staff), her shattering descent into a complete mental breakdown is mesmorizing to read. However, I found her redemptive relationship with Bodie both unsettling and inconsistent. Bodie's initial tactics to win her over were dead turn-offs (blackmail, lies, and derogatory language - like how he plans on correcting her with a dog collar) - he comes off as overaggressive, not to mention insulting and mean. Then, abruptly, he turns into a broken-hearted man-baby because she doesn't want to show him off in public.

Those problems aside, Match Me If You Can is an entertaining, realistic, and complex example of the "opposites attract" romance, more profound and meaningful than a simple Dharma & Greg rehash. Annabelle manages to be sparkly and fun without coming off as a fruitloop, and Heath is confident and aggressive without being threatening or offensive. This novel could very well be your perfect match.
B+.
Posted by AnimeJune at Thursday, March 19, 2009