Shows You Should Watch if You Know What's Good For You, Part One

I consider myself a TV-holic. It goes through stages - I'm watching a dozen shows in September when all the new stuff comes up, and over the months, as work and school and other commitments take precedence, I leave more programs by the wayside when they lose my interest. Eventually, I even let older shows I've watched go when they no longer provide the entertainment worthy of the investment of an hour's time.

But occasionally, there are shows that wow. Shows I watch religiously - either ones that grab me right away and hook me in, or the ones that grow on me until I can't imagine missing a single episode. I could describe them all here, but I don't want to take up that much of your time. Instead, I'm going to introduce you to two of my favourite shows - one of which is established, one that's just started, and both of which are on the ratings bubble right now so future seasons for them are uncertain. I think everyone who loves a show that's ratings-challenged (hi Arrested Development and Pushing Daisies fans!) experiences a certain feeling of helplessness when they hear their favourite show's future is iffy. Some write letters. Some keep the DVD sales up. Some send bags of peanuts to producers.

Me, I'm taking it to my blog. I think these programs are exciting and entertaining, and I don't want them to end up on the "brilliant but cancelled" list this year (*sigh* So long, My Own Worst Enemy...). 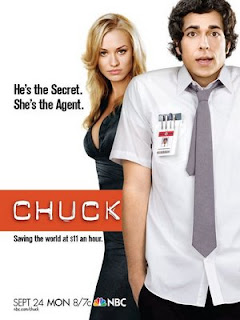 The first show I'm discussing today is NBC's Chuck. The story? Chuck Bartowski (the adorable Zachary Levi) is a regular shmo with above-average intelligence who had a bright future ahead of him - until his roommate Bryce Larkin stole his girlfriend and got him expelled from Stanford. The show opens five years after this event, where Chuck is a computer techie at Best Buy, er, I mean a Buy More electronics store. He makes eleven dollars an hour. He lives with his sister and her boyfriend, Captain Awesome. And his life is going nowhere.

Everything changes when he receives a mysterious e-mail from his erstwhile roommate Bryce that downloads millions of bizarre images into Chuck's brain. It turns out Bryce is a CIA rogue operative who stole a joint CIA/NSA project called the Intersect - a program designed to facilitate the exchange of intel between the two agencies, using images subliminally coded with the nation's secrets.

Only now all of those secrets exist solely in Chuck's head. The agencies send CIA agent Sarah Walker (Yvonne Strahovski) and NSA agent John Casey (Firefly's Adam Baldwin) to act as handlers. Chuck simultaneously represents the USA's biggest asset as well as its biggest liability - while his newfound ability to "flash" (or access Intersect information) on persons, names, or objects relevant to CIA cases helps Sarah and John fight evil, the secrets in Chuck's head also make him an irresistible target for America's enemies.

In case you forgot, however, this show isn't all spywork. It's got a bit of everything - romance, drama, action, mystery, and more recently, sci-fi. The title is really the most accurate description of the show: it's all about Chuck, and how he adjusts to his changing circumstances. The excellent writing combined with Zachary Levi's spot-on performance makes Chuck a lovable and engaging centerpiece. At the beginning of the show he's a certified loser - he's still licking his wounds five years after his dreams were shattered and lives in a kind of never-grow-up stasis, never moving out of his sister's apartment, still plugging away at the dead-end job he took up after college, and forget about girlfriends!

His life might have proceeded indefinitely in that direction if not for the Intersect. Thanks to the secrets in his head, he's thrown into situations of danger and excitement he never would have dreamed of, and suddenly, Chuck develops an identity that goes deeper than a Buy More nametag. Spywork doesn't always agree with him - he's often clumsy, naive, and too goodhearted in situations that call for head-bashing and gunplay - but that's not the point. The joy of Chuck comes from watching how adventures with terrorists and gunrunners and assassins unwittingly contribute to Chuck's self-discovery, as he unearths hidden depths of intelligence, cunning, bravery, confidence, determination, and morality to deal with situations.

Before I bore my regular romance readers out of their minds, there is a romance to Chuck. Throughout the series, Sarah and Chuck skirt around their burgeoning feelings for each other, feelings that continue to develop despite ever-present obstacles. Sarah is an experienced spook, fully knowledgable in foreign languages, weapons, and martial arts. She's less experienced at love - her last boyfriend (and CIA partner) went rogue and stole government secrets, so she's hesitant about entering into a relationship again, especially with the computer nerd she's supposed to be protecting. Chuck, meanwhile, pines for Sarah but at the same time feels a relationship with her is incompatible with his plan to return to a normal life once the Intersect is extracted from his brain. He's also intimidated by her because, well, she's a walking weapon and he's a nerd.

Regular romance readers will be intrigued by the reversed power dynamic in Chuck and Sarah's relationship. In Chuck, Sarah is the physically powerful, dominant, take-charge Alpha while Chuck is the submissive, physically weaker, emotional Beta. The Alpha-Beta dynamic itself is still intact (the Alpha generally solves problems physically, the Beta intellectually - the Alpha is emotionally suppressed while the Beta is expressive), but in the romance novels I read the hero is almost always the physically dominating Alpha while the heroine's job as the Beta is to counter the Alpha with cunning, wit, and emotion. It's particularly sweet here to see the reversed gender dynamic - especially since Chuck can still be incredibly sexy without breaking down doors and kung-fu gripping everybody.

By Season Two, both Sarah and Chuck realize they're in love with each other, but they remain stuck on the sticky question of whether entering into a relationship would be wise with both their futures so uncertain. Season Two also heralds the appearance of a new villainous entity: "Fulcrum," a secret society composed of CIA double-agents who achieve their ends through violence, subterfuge, and eeeevil. Fulcrum's on the lookout for the Intersect, and while so far only Chuck, Sarah, Casey, and their boss General Beckman (Bonita Friedericy) know it's locked in Chuck's head, he's still in considerable danger should the baddies ever find out the truth.

While Chuck's first season was cut short by the writers' strike, the strike also cut a swath through the number of pilots available for the following TV season, so Chuck was able to secure a second season. Now, however, the writing industry's bounced back, hordes of potential pilots are waiting in the wings, and Jay Leno's new talk show with NBC takes away an hour of primetime space every weekday. Chuck's not doing terribly, but its ratings are average, which means it's still at risk of being cancelled to make way for new blood or more Leno space. I can only hope that NBC gives Chuck the third season it deserves - the show possesses a highly sympathetic character, zinging humour, some truly hilarious action scenes, and a sweet and slow-burning romance. In truth, it's got a little bit of everything. The first season's out of DVD, I recommend giving it a try.
Posted by AnimeJune at Saturday, March 14, 2009