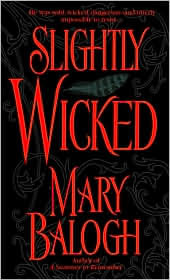 The Dude: Lord Rannulf "Ralf" Bedwyn. His dying grandmother (who's leaving her entire fortune to him), wants to see him married more than anything, and even has a choice picked out. Not willing to shop for "World's Worst Grandson" coffee mugs just yet, he vows to give the girl a try.
The Rub: While he wants to fulfill his grandmother's wishes, he can't help but feel an attraction for the girl's mistreated cousin - the alluring "actress" whose virginity he unintentionally took.
Dream Casting: Seth Rogen. Yes, I am serious!

Ralf: Wow! Her pretend virginity kick is SO HAWT!

Ralf: Damn, her virginity-pretending-to-pretend-virginity thing is so exactly the opposite of hawt. Oh, hi Granny!

Judith: My family's too poor and we're too different.

Ralf: How about if I pay your brother's debts?

1 (Perfectly Healthy) Grandmother with a Scandalous Past

The Word: Hello, I'm Animejune. And I'm a Balogh-aholic. Every time I pick up one of her novels (or short stories, as in the case of It Happened One Night), I fall in headfirst. She is the reason I love romance historicals - her characters respect historical conventions and take pleasure in period amusements but still manage to be relatable. I truly feel like I'm living in Regency England in her books, and she creates such a wonderful sense of atmosphere, especially with rural settings. This is actually my third Balogh novel, after The Secret Pearl and Slightly Married, and it doesn't disappoint.

Judith Law can't imagine how life could get any worse. Her brother's reckless spending has beggared the family finances. As a result, her wealthy aunt's offer to take in one of the Law children as a companion to her mother was impossible to refuse - even though the position is basically that of a poor relation, an unpaid servant, a Cinderella position empty of pleasure or prospects. Judith knows her future is a bleak one, and, given the nature of her brother's habits, realizes it's unlikely she'll ever return home. And on top of all that, her stagecoach overturns in the middle of nowhere.

So when an attractive stranger passes by on his horse and offers her a ride to the nearest town, she accepts. When asked her name, she sees one last chance for a small adventure before being condemned to dreary servitude and introduces herself as Claire Campbell, famous actress. Unbeknownst to her, the attractive stranger is Rannulf Bedwyn, a regular Regency gent who, in a realistic leap in reasoning for his period, sees "hot chick" and hears "actress" and thinks "good for a lay or two."

He never forces her or aggressively seduces her, but is companionable and charming, and eventually they fall into bed together. Thanks to Mary Balogh's fantastic characterisation, this never comes off as cheap or altogether implausible (a la Second Sight). After all, Judith thinks, who's going to know she's a fallen woman? And how likely is it she'll ever be married with no fortune or connections? When her certain future is as a shadow in a wealthier house, Judith sees a chance to grasp a dream for herself, if only for a couple of days. Their love scenes are not only sexy, but subtly funny - mainly because Ralf assumes "Claire Campbell" is sexually experienced and marvels at how skilled she is at pushing all of his buttons with her unaffected, innocent "act."

However, when he offers to accompany her to "York" where she's "accepting a new role," Judith realizes her plan's backfired and flees, leaving an apologetic note. Angered at being dumped, Ralf's mood is further darkened when the nosy innkeeper unwittingly reveals that "Claire Campbell," experienced Sex Goddess, was actually a virgin.

Ralf continues on to his destination, his grandmother's estate, where he quickly ascertains that his doting grandmother is dying. Long ago, she decided to leave her estate and fortune to him alone (even though he has two older brothers), and has always tried to hook Ralf up with different girls of good breeding and taste. While he's always wriggled out of her matchmaking attempts, now that he realizes his grandmother doesn't have long, he promises to give her current choice a shot.

He's quickly introduced to his prospective bride's family, who are a shallow, snobby bunch with the exception of a flamboyant grandmother and a dowdy poor relation. Imagine his surprise when the woman hidden beneath shapeless dresses and oversized caps is none other than "Claire Campbell"! He's understandably outraged, at himself as much as at her, especially now that he realizes he deflowered the innocent daughter of a gentleman, and he privately offers for her hand.

Judith refuses. Within the context of two nights of enjoyable pleasure, she was able to see Rannulf as a romantic figure. In the harsh light of reality, however, he comes off as a pig: the kind of man who thinks nothing of tumbling total strangers in roadside inns right before courting a proper lady. Those two days Judith was hoping to cherish as tender memories in her heart now feel tawdry and cheap.

Both vow never to bother the other again, but fate, as it often does in Balogh novels, has other plans. As angry as they are with each other, and as much as they'd both love to go stomping off in opposite directions, their unique and well-developed personalities won't allow that. Which means good reading for you and me, naturally!

Mary Balogh has a delightful tendency to introduce characters that appear to be flimsy cliches or familiar archtypes at the beginning, only to pull away their layers piece by piece to show the profound and realistic motivations behind their character traits. In this case, both Rannulf and Judith appear to be familiar characters: Rannulf is in typical younger-son-identity-crisis-mode (see: An Offer From a Gentleman, Romancing Mr Bridgerton, The Heir and the Spare, etc. etc.), and Judith appears to be one of those eye-roll-inducing heroines with great tits and fantastic hair who thinks she's hideously ugly because she has freckles or some crap.

In this case, Ralf always felt like he disappointed his father by not entering the clergy (the tradition among third sons of the peerage), and feels like an irresponsible shirker when compared to his brother Aidan (the hero of Slightly Married who dutifully entered his second-born self into the military). However, he doesn't let his perceived flaws turn him into a whining mope (*cough*Colin Bridgerton*cough*). He takes action, and I enjoyed how he always fought against his feelings of uselessness without wallowing in them. In fact, his strength is the main reason behind his presence in the story - while he realises pretty early on that Julianne (Judith's cousin) is a bitchface, he refuses to casually slough off responsibility once again and is determined to do right by his grandmother (awww....), even if it means giving Julianne way more consideration than she deserves. Of course, this also allows him to remain close to Judith.

Judith, once you get over the grating scene where she hopes Ralf won't be repulsed by her grotesquely large, supple breasts, also has a reason for her ugly duckling beliefs that really surprised me. It wasn't a matter of being simply oblivious or insanely naive, but more a result of how people who were supposed to care about her saw her obvious beauty as a threat and spent her life telling her it was wrong. Her father, a puritanical preacher, enforced modest clothing and caps to cover her red hair ("the devil's own colour" according to him - maybe he read The Runaway Duke?), blaming her for other men's leers.

Her aunt reacts much the same way, albeit for a different reason - she has her maid alter all of Judith's dresses to be as shapeless as possible and also insists Judith cover her hair, so that she won't take attention away from Julianne. And of course, by the novel's end, Balogh reveals yet another reason for her father and her aunt's hostility towards her looks (something to do with their mother's scandalous past), that further explains why they insisted on hiding her beauty - because they saw it as a way to crush a spirit they feared might bring shame and ridicule to their family. So, naturally, Judith has some very distorted ideas about her own image, but aside from that she's a whip-smart, responsible woman with realistic expectations.

Really, the only thing that kept this from being an A was a last-minute revenge plot at the end that succeeded in bringing other Bedwyns into the story (including Wulfric, who remains an Asshole with a capital Ass) and some suspense and misunderstandings but it felt a bit contrived and needless in a story that had done just find up until that point with dialogue, character development, maturity, and sexual tension.

That being said, Slightly Wicked was a thoroughly enjoyable read, with a well-formed theme about responsibility. Rannulf and Judith are perfectly matched - Ralf is a man who fears he's spent too much time running from life and responsibility, while Judith takes her duties and obligations to her family so seriously that she often neglects her own life and needs. Mary Balogh brings together two fully-developed characters through unlikely circumstance, and keeps them together through delightful interaction, characterization, and romance.A-.
Posted by AnimeJune at Tuesday, March 03, 2009