Okay, so for Day Four of Book Blogger Appreciation Week, my task is to talk about a favourite book of mine that I never would have found without the recommendation of another book blogger. I've frequently received comments on Gossamer Obsessions from people saying, "Wow, I have to try this book now" or "I read this and loved it, thanks" after reading my reviews, and this swells my dear bookworm's heart to uncomfortably large proportions, really it does.

But once, I was a romance newbie. The first book blog I can remember reading was Smart Bitches Who Love Trashy Novels - this was waaaay back in 2006-2007, before they shortened their name to Smart Bitches, Trashy Novels. To this day I still can't remember how I found this blog in the first place, but the beautiful site design caught me (yes, I'm shallow and like bright colours and shiny things), and I started reading their posts.

I'd never read romances before that. I was strictly a sword-and-sorcery gal, avidly chewing my way through door-stopper fantasy trilogies by Tad Williams, Kate Elliott and Robin Hobb. I wasn't an opponent of romance - rather, I was oblivious to it. I didn't care one way or the other. Most of my favourite heroines fell in love with men who died (or fell in love with Death, as in Tanya Huff's marvellous Wizard of the Grove duology), or red-headed beanpole scullery boys who turned out to be secret kings (such as in Tad Williams' Memory, Sorrow and Thorn series), or two men at once (in Mickey Zucker Reichert's Beyond Ragnarok books our heroine's love triangle is only further complicated when she sleeps with two dudes and gives birth to BOTH of their sons AT THE SAME TIME, FO REALS).

The romance in my favourite fantasy books was the tasty french fries that came with the meaty steak-sandwich of the plot - it flavoured the story, but it wasn't the whole deal. There were evil uncles to kill and magical ships to captain and talking wolves to befriend. I couldn't understand how a plot could be interesting if it didn't have a giant monster to kill in it.

But I read the Smart Bitches' posts anyway, and they were hilarious. They fiercely defended the honour of Good Romance (Kinsale and Kleypas and Crusie), but holy crap when a romance was bad they would beat the everlovin' literary shit out of it (one of their DNFs was a Fern Michaels book - why oh why didn't I listen??). I was intrigued by some of their reviews, but, hey, none of them had dragons in them. Nothing to get too excited about.

However, thanks to their effusive and witty reviews, in 2007 when I went on a bookrun, I decided to pick up a copy of one of the books they recommended the most highly: Bet Me, by Jennifer Crusie. Since I was a university English major at the time, it went at the bottom of my TBR because I had course reading. When I finished reading all the books on my reading list, I decided that after a year of reading heavier works like Samuel Beckett's Malloy (a DNF), Mary Barton and Diamond Grill, I was eager to relax and read something fun. 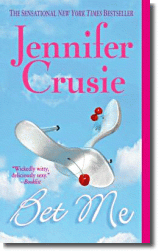 So I picked up Bet Me.

On top of the madcap craziness, however, we have two characters who are very sympathetic and real. We have villains with motivation who aren't necessarily bad people - just the wrong people. We have a plot that begins with a gimmick (a drunken bet) that doesn't become a contrivance for the whole novel. And I discovered that I don't need an epic quest or a magical sword to be entertained.

I discovered a similar thread in the fantasies I read as well as the romances I started to devour: I like characters. I loved Robin Hobb's Farseer and Tawny Man trilogies because the protagonist Fitz is an empathetic hero who faces real problems (self-doubt, loneliness, a need to belong) along with his psychic powers and the aforementioned evil uncle. I rooted for Simon in Tad William's Memory, Sorrow, and Thorn series because underneath the armour and the hasty knighthood is an uncertain 16-year-old boy who rarely has an idea of what the fuck's going on but will try to do the right thing anyway. I adored Alanna in Tamora Pierce's Lioness Rampant series because she was a strong character with realistic motivations in an unrealistic, magical world.

Similarly, I grew impatient with fantasies like Melanie Rawn's Dragon Prince trilogy because the characters didn't make sense or make human decisions - the series had all the magic and bombastic special effects but the characters were propelled by the plots and didn't behave like real people.

I don't think reading Bet Me changed me as a reader. Instead, it helped me better identify what kind of a reader I was. I'm character-driven, and most romances tend to be character-driven stories. I don't think I would have found this out about myself without the help of the Smart Bitches.

Thank you, Sarah and Candy!
Posted by AnimeJune at Thursday, September 17, 2009