It's that time again - the time when old shows return (yay to The Office, Fringe, and Saturday Night Live) and new shows premiere to suck me in and waste my valuable, valuable time.

Yes, it's not even October yet, but I've already narrowed down my best-of list to three. My top three new shows of the season are: 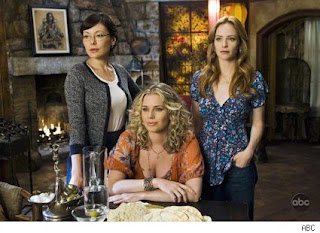 3. Eastwick. Admittedly, I didn't know what to expect of this series. I didn't like the movie (the cherries! Ewww....), hadn't read the book, and the early reviews on this show were pretty terrible.

Now that I've seen the premiere, I think it's maybe because people expected this show to be serious. It's not. It's really not. But that's all part of the fun.

Yup, Eastwick is fun. We have a delightful New England small town setting, light humour, fun characters, and Paul Gross. Dude, Paul Gross. If you are Canadian, you are obligated to support this show just to show your patriotism.

The plot, such as it is, is this: the small town of Eastwick used to be famous for its witches, although now most of the townsfolk just hype it up as a fun folksy myth. That is, until three women start developing powers. Roxie (Rebecca Romijn), a free-spirited artist cruelly labeled the town slut because she's dating a much younger man, starts having prophetic dreams and visions. Kat (Jaime Ray Newman), a harried nurse with five kids who's married to a lazy drunk, discovers she has power (although little control) over nature. Finally, there's Joanna (Lindsay Price), a shy, mousy reporter who discovers she can hypnotize and control people with her eyes.

These women never really discover the true extent of their magic until a dark, mysterious stranger strolls into town (Paul Gross, reprising Jack Nicholson's role), who encourages them out of their repression but who may, unfortunately, be the devil. If there was a recipe for Eastwick, it would be a dash of Gilmore Girls for setting and atmosphere, a spoonful of Practical Magic for the fantasy aspect, and a cup of Desperate Housewives for light, soapy humour. I hate to sound sexist, but it really is a fun girly show to watch curled up under a blanket with some hot chocolate.

The characters are great, too, and it's fun to watch how their magic both complements and complicates their lives, especially with the Devil's interference, which has both good and bad consequences. Kat, the working mother with the unemployed husband, spends so much time caring for other people and embodying the nurturing and life-giving aspect of nature (which is magically demonstrated by her ever-growing tomatoes), but she also possesses the darker half of mother nature's powers: destructiveness (in the premiere, she unintentionally causes an earthquake and has her asshat husband struck by lightning).

Joanna is used to being ignored and a doormat, despite her passion for journalism, until the Devil (alright, alright, Darryl) reveals that the reason she's taken for granted is because she believes she's undeserving of notice, so her hypnotic powers have unintentionally convinced everyone around her to ignore her and take her for granted. Once she actually starts going for what she wants, she gets it - but how far can she take her powers of persuasion before she crosses the line?

And Roxie, well - she's already pretty uninhibited, but when the woman who always lives in the Now starts getting crystal-clear visions of the Yet To Come, how can she plan ahead?

Seriously, ladies, ignore the reviews - try Eastwick, and have some fun. 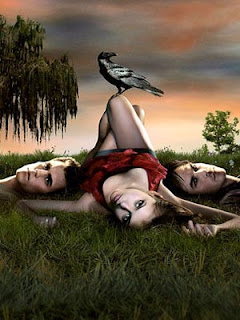 2. The Vampire Diaries
In this case, do listen to the reviews. For some reason, I find I can tolerate vampires much more on television than I can in romance, and Vampire Diaries is no exception. My goodness, this show is addictive, thanks in part to the fact that it manages to uphold all the dark, interesting aspects of vampire mythology while at the same time taking it in new directions.

Main character Elena (Nina Dobrev, another Canadian!) starts the new school year in Mystic Falls, Virginia, with a firm resolution to Be Happy. Months before, her parents were killed in a car accident so now she and her drug addict brother Jeremy (Steven R. McQueen) live with their aunt. Even as she's trying to convince her friends and the townsfolk that She's Okay (in part so that they'll stop asking if she is), she's not the same bubbly, social girl she was before and she spends a lot of time writing in her journal, in order to keep some of the past alive.

At school, she runs into a mysterious new student, Stefan Salvatore (Paul Wesley). Instead of pity or determined cheerfulness, he shows her compassion and understanding, and she quickly takes to him. Unbeknownst to her (although fully knownst to us, heh), Stefan is a 200-year-old vampire. He doesn't sparkle, thank heaven, but he wears a special ring that allows him to come out in sunlight.

Oh, and he has an older brother, Damon (Ian Somerhalder), who's also a vampire, only eeeeevil, and he demonstrates his evilness in the Grand Tradition of Vampire Fiction by being funnier and sexier than the Good Vampire (a la Eric over Bill in True Blood and Spike over Angel in Buffy). Damon and Stefan have a history, a deep dark mysterious history, involving a girl they both loved who died in a fire in 1845.

Did I mention that this girl, Catherine, just so coincidentally happens to conveniently look exactly like Elena? No?

While we have this delicious drama, however, the show doesn't hamper itself by making this the only conflict. The show doesn't burden us with overbearing angst and darkness and emo-ness, but provides a well-rounded plot with several different threads (not all of which involve vampires, or evilness, or magic). Along with the Elena-Stefan-Damon conflict we also have the troubles of Elena's troubled brother Jeremy who's in love with the quarterback's equally troubled (albeit older) sister, Elena's friend Bonnie who just might be a witch, and the quarterback, Matt - a genuinely nice guy whose brief romance with Elena came to a dead halt upon her parents' death and who wants to renew their relationship. This is one of the show's main strengths - while it does give us the spice of a magical main storyline, it also provides some down-to-earth relatable human dramas as well to keep the story from becoming overblown or boring.

However, even from the vampire angle, the show takes it in some new directions. Stefan really wants to live a normal life, so instead of lurking in the shadows he goes and joins the football team. A vampire. On a football team. In a jersey. In an episode titled "Friday Night Bites." In that episode, he even makes some jokes about how he shouldn't try out because he's "supposed to be the loner." Even though Stefan, by being the Good Vampire, is relegated to the role of Second Sexiest Dude on the Show, it doesn't mean he can't crack a joke, be cheerful, have fun, and, y'know, like, not drown in an Overwhelming Pit of Centuries-Old Angst.

And Damon. Oh, Damon Damon Damon. He is hilarious. He definitely takes the Buffy route by using his evilness as an excuse to crack wise and be funny rather than glower and grimace. No one in town knows he's evil but Stefan, so Damon breezes in with a sneaky grin and all these vampire double-entendres and everyone laughs but Stefan is suddenly all Growly Face because Damon's been Eating a Bunch of People and has Enslaved the Head Cheerleader with his Sexy Hypnotic Vampire Eyes but only Stefan knows.

That being said - there is some Serious Vampire Drama in this show, and it's well-developed without taking over the plot entirely. So yeah. Hawt vampires. Actual humour and depth. Dark drama evenly mixed with light soap. So go out and watch it! 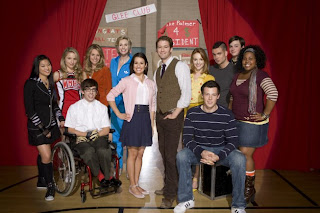 Seriously, Glee is a great show. Like the two other shows I've hyped in this post, Glee succeeds because it combines darkness and light in equal measure. Primarily, it's a surreal comedy about Will (Matthew Morrison), a teacher at his former high school who decides to take the Glee Club (full of misfits and rejects and one blackmailed popular jock) and make them good enough to place at Regionals.

Of course, he does have obstacles - like Sue Sylvester (the incomparable Jane Lynch), the leader of the school's champion cheerleading squad the Cheerios, who doesn't like the idea of Glee Club stealing the Cheerios' thunder. He also has to deal with his immature wife Terri (Jessalyn Gilsig), his burgeoning affection for the school's cute but obsessive-compulsive guidance counselor Emma (Jayma Mays), and the prima donna affectations of Rachel (Lea Michele), a truly gifted but arrogant Glee Club member who won't tolerate anyone getting the solos but herself.

Each of the Glee Club members gets their own story (and songs!) as well as fantastic character development. Even characters that threaten to be stereotypical (like school bully Puck and bitchy cheerleader Quinn) get fleshed out in truly original ways. Not to mention, each and every one of these characters can sing and do so in gorgeous musical numbers. Of course, the show takes the Chicago route when it comes to these numbers - characters only sing when they're a part of a Glee Club performance or rehearsal, or else in a fantasy sequence. No High School Musical I'm-singing-the-script nonsense.

However, these characters also have to face significant real-world problems that aren't immediately relevant to Glee Club - cheerleader Quinn (Diana Agron) finds out she's pregnant, Terri and Will are struggling to have a baby of their own, Rachel falls in love with popular jock Finn (Cory Monteith), and flamboyant tenor Kurt (Chris Colfer) has to come out to his dad.

There is just so much to love about Glee - the singing, the hilarious writing, the direction, the character development - that if I wrote it all down this post would be far too long. Just take my advice - watch the show.
Posted by AnimeJune at Tuesday, September 29, 2009