Commentary: The Difference Between Liking and Empathizing With

*WARNING: THIS POST MAY HAVE SPOILERS ABOUT THE MOVIE DISTRICT 9, WHICH I HIGHLY RECOMMEND YOU ALL SEE BECAUSE IT WAS AWESOME. IF YOU'VE ALREADY SEEN IT, BY ALL MEANS READ ON. YOU HAVE BEEN WARNED* I hate Seinfeld. That may seem like a weird way to start a post on a romance blog, but there you have it. Many people have said that Seinfeld is a hilarious, ground-breaking show in terms of comedy and direction, but I couldn't give a crap. Why? Because I despise the characters - they're a bunch of whiny losers who inexplicably feel entitled to perfection and spend episode after episode complaining about a single tiny flaw that one person had.

I don't really care that some of the jokes were funny (admittedly, some are) because I just don't like watching the characters. Even now, if a re-run comes on, I would rather turn off the TV then let their high-pitched whines serve as background noise. 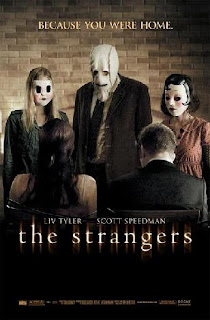 I like The Strangers. You know, the movie in which Scott Speedman and Liv Tyler are terrorized in their own house by random mask-wearing people. A lot of my coworkers scoff that The Strangers was a terrible horror movie, but I have to admit that this movie scared the everlovin' shit out of me.

I don't normally watch horror movies, but I was on a bit of a Scott Speedman kick so I rented it. The first fifteen minutes, in a very subtle and beautiful fashion, quickly set up the dynamic between Kristin (Tyler) and James (Speedman). Returning from a wedding reception, James proposes to Kristin but is rejected. We don't even see the proposal or the rejection - at the beginning of the movie, we simply see James drive Kristin back to their house - James with a white-knuckled grip on the steering wheel and Kristin with tears on her face.

For the next ten minutes, James and Kristin fumble around each other as they try to decide what to do now and the actors convey the characters' emotions so powerfully - it's obvious they still love each other but have no idea how to move on from the failed proposal. Kristin is hesitant and guilty, James is saddened but still a consummate chivalrous gentleman. 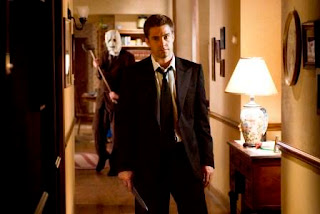 Without these fifteen minutes, I don't think this movie would have worked for me. But by the time the Strangers show up to cause hell, I cared about the characters enough that I was really engaged by what happened. I was scared when they were scared, because I wanted them to survive and resolve their relationship problems (as well as the obvious problem of freaky psychopaths in doll masks stalking their property with hatchets).

In cheesy slasher flicks, the victims are, more often than not, selfish, vapid characters who are purposefully annoying (remember the scene from Scream when Jaime Kennedy points out that the people who drink the most beer and have the most sex die first?). I never found slasher flicks very scary because often I wanted the characters to die - the characterization in these films are often so shoddy because the filmmakers seem to want the audience to root for the villain (Michael Myers, Freddy Kreuger, Jason, Chucky) because they're the characters the franchise is built on that come back in film after film.

What I'm trying to get to, with my hatred of Seinfeld and love for The Strangers, is that I am a reader and watcher who likes characters. Story is all well and good, but the characters are paramount. At first, however, I thought that when I read a book or watched a movie that I needed the characters to be likable. I had to like them - they had to be people I could stand to be around on a daily basis and who agreed (more or less) with my own moral and ethical standards. 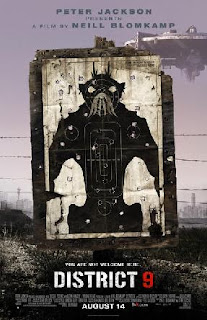 My own understanding of my character preferences changed when I saw District 9. I'm definitely not going against popular opinion when I say that I adored this movie and that it was awesome. The special effects were spectacular, the story was gripping, the format (half shaky-cam, half documentary) was very effective - but what fascinated and entertained me the most about this movie was the main character, Wikus.

However - was Wikus likable? Hell, no. At the beginning of the movie, he's this weaselly, patronizing, bigoted bureaucrat who's married to the boss's daughter, which explains how he lands the important job of heading the task force to evict the alien refugees (known colloquially as "prawns") from their current slum of District 9 to the newer, more tightly-guarded and prison-like District 10. The move is exploitative, shady, and quite possibly illegal in how it offers the aliens little to no rights - and Wikus knows it. When he offers an eviction notice to an alien with a request that he sign it, the alien angrily swipes the clipboard from his hands and screams, "Fuck off!" Wikus picks up the form, now dirtied by the alien's handprint, and says they'll consider the mark a signature of consent anyway.

Also, when soldiers burn a shack filled with unborn alien eggs, Wikus gleefully giggles at the camera and says, "It sounds like popcorn going off!" What a guy.

Of course, everything changes when Wikus unintentionally winds up infected with alien DNA, and he gets put through the wringer. He's kidnapped, tortured, and experimented on, as it's discovered that his mixture of alien DNA allows him to operate the prawns' biologically-programmed superweapons, which human governments want for themselves. Wikus becomes South Africa's most valuable biological commodity, once he's harvested.

Wikus manages to escape and flees to where no one would think to look for him - District 9. However, does he become likable then? Not really. Although he eventually does team up with a rebellious prawn and his young son who seek to return to their mothership, it's obvious that Wikus is still mainly looking out for himself, and that his prejudiced beliefs haven't just miraculously evaporated. He makes a lot of selfish, fearful decisions throughout the movie.

So why was he my favourite character? Here is the argument I've been getting towards: liking a character doesn't necessarily equal feeling empathy for them. It can, but it doesn't have to. Liking something is easy to define. To feel empathy for someone, however, means you understand them, and even sympathize. It doesn't necessarily mean you have to like or agree with them.

Take X-Men's Magneto, for example. His character's not exactly friendly - he's murderous, ambitious, power-hungry, with plans for mutant domination. However, he provokes a lot of empathy as a character, as his backstory allows us to understand why he is the way he is. He survived the concentration camps of World War II, so he's experienced the very worst of human hatred, so it makes sense why he's hell-bent on preventing that from happening again.

Ultimately, I think I prefer characters who incite empathy over characters who are simply likable. As long as the characters make decisions I can understand on a sympathetic level, then I don't necessarily have to like them - although inevitably that's what usually happens. Think of Michael Scott from The Office - he's a terrible boss, but as we get to understand his character and his incredibly lonely childhood and personal life he inspires an enormous amount of empathy (at least from me), so that when he does make those rare good decisions it's all the more powerful. With The Strangers, because we get that first 15-minute interlude where we get a glimpse into the characters' personal lives, we understand them and thus empathize with their terror when their lives are invaded.

However, with the d-bags from Seinfeld, I can never empathize or understand why they'd all get so worked up over the small stuff, to the point where it ruined their personal lives. 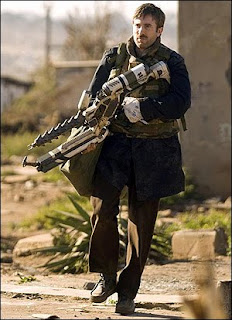 With Wikus, even as he did occasional asshat-ish things, we understand what he's going through because we see it happen. He has his whole life taken from him, all at once - his job, his reputation, the wife he adores, and even his humanity. His desperation to return his life to the way it was, no matter the cost, rings true - and that, of course, makes the moments where he finally grows some balls and decides to think of others for a change all the more powerful because we already know how much motivation he has to think only of himself.

If the writer/director had turned Wikus into a grandstanding hero who quickly realizes the utter foolishness of his asshat-ery, he might have made Wikus more likable, but he would be crippling our empathy for Wikus because it would weaken our understanding of his character. The beginning of the movie shows us a Wikus who is a small-minded, callous pencil-pusher - if he suddenly changed all of his principles at the drop of a hat, it wouldn't have made any sense. The fact that it takes so long for Wikus to consider life beyond his own nose corresponds with what we've come to grasp of his character - so when he finally does decide to make the selfless choice, it's a choice that is clearly motivated, that incites our empathy and that finally (finally!) makes us like Wikus as much as we understand him.

In this roundabout way, I'm trying to tie all this in to romance novels. Some authors, in a mistaken bid to pander to readers instead of concentrating on the strength and foundation of their narrative, put all their effort and writing talent into making their characters as likable as possible - they want to give their characters lots of good qualities to incite reader admiration, but because they are afraid of turning readers off, they don't give their protagonists any corresponding faults.

Easy to like? Sure. Easy to empathize with? No. Because we're not perfectly perfect, it's very difficult to comprehend the how and the why behind a Mary Sue's reasoning. Why are they nice to everyone? Why do they ignore a social convention that everyone else follows to the letter? To quote Dollhouse's Topher: "Everyone who runs towards something is also running away from something else" - so a character who has strengths in one area has to have weaknesses in another, else their strengths are meaningless.

I'm not saying that characters in romance shouldn't be likable - but I'm saying that I, as a romance reader, prefer well-written, flawed characters whose actions and decisions I can understand over characters who are always nice and always kind but who don't have a real basis for why they act the way they do.

My name is AnimeJune, and I read for flawed protagonists.
Posted by AnimeJune at Thursday, September 24, 2009