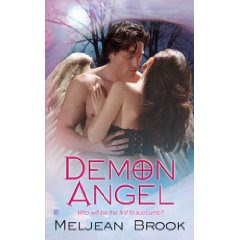 The Chick: Lilith, a.k.a. "Lily Milton." A 2000-year-old demon serving under Lucifer, when she met a young knight named Hugh and accidentally-on-purpose engineered his downfall, instead of letting him die she helped turn him into a Guardian, an angelic helper. Not that she expects any sort of favour in return.
The Rub: Even after 800 years of banter and cat-and-mouse, she can't bear to reveal her secret to Hugh: that she's not a full demon at all, but half-human, and thus capable of love and physical pleasure.
Dream Casting: Milla Jovovich.

The Dude: Sir Hugh, a.k.a. "Hugh Castleford." A Guardian, one of the half-human, half-angel creatures who protect humankind from evil, Hugh is very good at his job - except when it concerns Lilith. He keeps hoping he'll come up with a way to save her from Lucifer's clutches, but after 800 years of failure he can only come up with one idea...
The Rub: ...and that's to kill her. The pain of that sacrifice, combined with 800 years of disillusionment, cause him to lose faith and renounce his Guardianship. However, years later, Lilith resurfaces, alive and well and apparently involved in a conspiracy to pin him for murder.
Dream Casting: Billy Crudup.

Lilith: Aw, you're so cute when you're delusional. Really, really cute.

Hugh: There's only one way I can possibly free you from Satan! *stabs Lilith*

Hugh: Um, awkward. I'm still going to save you, though.

Lilith: Why do you ALWAYS have to think of everyone ahead of yourself?

Hugh: Because it's sexy and YOU LOVE IT.

Hugh and Lilith: *make the demon with two backs*

Lilith: Zip it. I've already trashed your evil plan, so go sit on a pitchfork.

The Word: What is it with paranormals these days? Why don't they suck anymore? Early on in my romance reading, I received several paranormal romances and urban fantasies to read by The Green Man Review and I burned out on them fast. For so many of these novels, they weren't terribly written but they were just so much "m'eh." The smart-alecky, tough-as-nails, troubled magical heroines all read the same and just seemed so interchangeable.

So did something happen between then and now that they don't suck anymore? Spoiler alert - this is a positive review for Demon Angel and the book I'm reading for Green Man right now (Devon Monk's Magic in the Blood) is also shaping up to be very, very good. Maybe I've matured. Maybe writers have gotten better. I don't know.

Anyhoo - Demon Angel. Our protagonists meet in 13th century England. Hugh is a 17-year-old knight in the service of a baron, and Lilith is a demon sent to tempt souls into corruption. Specifically, Lilith's task is to corrupt the baron and his hot child bride, but when she meets Hugh, she spots an opportunity to seduce an innocent - something that earns big points in Hell.

However, Lilith underestimates Hugh's virtue - as well as his wit and honesty. He doesn't try to deny his attraction to her, and yet he manages to hold her wiles at bay by questioning her, bantering with her, trading jokes and laughter. His stubbornness both frustrates and intrigues Lilith, who spends more and more time with him.

However, Hugh is soon warned away by his mentor Georges, who reveals himself to be Michael, leader of the Guardians - former humans granted angelic powers to protect humankind from the temptations of demons. Neither Guardians nor demons can kill humans, nor impede their free will, but that doesn't mean they can't do a lot of damage. However, even learning Lilith is a demon doesn't shake Hugh's fascination with her, as well as his conviction that some capacity for good lies within her.

When Lilith's machinations with the baron and his wife come to fruition, Hugh sacrifices himself to save their souls - and Lilith turns out to be more corrupted by Hugh than the other way around. Even though her failure is bound to provoke Lucifer's wrath, she rescues Hugh after he's mortally wounded and hands him over to Michael to be transformed into a Guardian.

800 years pass. Hugh adjusts to Guardianship and he and Lilith cross paths frequently. He discovers that Lilith is a master of lies and half-truths, who always has some evil excuse handy to explain away the secret good deeds she performs. He remains convinced that she's compassionate at heart and if he tries hard enough, he'll find some way to release her from Satan's bondage.

Lilith isn't indifferent to Hugh's attempts, but under threat of Lucifer's Punishment (yes, it's capitalized) she keeps quiet about it. Unbeknownst to Hugh, Lilith isn't a pureblooded demon. Secretly, she's the Hellish equivalent of a Guardian - a former human given demonic powers using a similar ritual that gave Hugh angelic powers. Needless to say, most halflings don't last long - most of them end up giving into their human natures and are condemned to eternal torture by Lucifer. So, unlike demons, Lilith can feel love, loneliness, and pleasure (mostly for Hugh) but she's forced to deny these human weaknesses.

Being half-angel doesn't turn out to be all it's cracked up to be, either. After 800 years, Hugh is dead tired of failure, and his own human nature clashes with his angelic responsibilities. While he's immortal and has magic powers and kick-ass wings, he's bound to respect humanity's free will. This means if a man decides of his own free will to murder an unsuspecting family, Hugh can't stop him. This, coupled with his inability to help Lilith, makes him question how much good he really does as a Guardian.

He reveals his decision to Fall (i.e. renounce his Guardianship and become mortal) to Lilith at the same time he makes good on his last attempt to save her: by stabbing her in the heart. In theory, when a demon is permanently killed (by cutting its heart in two or beheading it), she is no longer bound in service and her soul is free to flee to whichever underworld it's destined for.

Shoot forward sixteen years to the present day. Hugh (who, sadly, no longer looks seventeen), is now an English prof at a university. A couple of his students have gone missing, and the Feds consider him their number-one suspect. While jogging, Hugh discovers the mutilated corpse of his missing student - and Lilith, alive and breathing.

Turns out Lilith was only mostly dead when Hugh left her, giving Lucifer enough to work with to revive her and send her back into the demonic workforce. Under the name "Lily Milton," she works for the FBI, and is now bound by a bargain to kill Hugh if she doesn't want to be condemned to eternal torment.

WOW. I know this sounds like a lot of plot description, but we aren't even halfway in. Demon Angel has a lot of story, and I mean a lot. You have demons, angels, vampires, nosferatu, Indian food, RPG card games, demonic senators, bargains, double-crosses, mystical rituals and sex.

For the most part, it works. Even with all the plot, the vibrating connection between Hugh and Lilith rings clear throughout the book and the author never allows the story to overwhelm the romance. Thanks to excellent pacing, the plethora of story elements never becomes narrative clutter, and keeps both the tension and the romantic stakes high throughout. There were so many scenes where the situation is at oh-god-the-world-is-ending but you don't notice until the end because Hugh said a nice thing that made Lilith's insides go all quivery! HUGH AND LILITH FOREVAH!

Character-wise, this story reminds me of Laura Kinsale's For My Lady's Heart. In both novels, you have a hero who's so pure and shiny you could see his ass from space coupled with a woman who's forced to walk a tightrope wearing her Evil Bitch face to keep her enemies at bay, even though she's a really a Tootsie Pop waiting for the right man to find the soft toffee centre hidden behind the hard candy (how many licks, Hugh?). Moreover, I really liked Demon Angel's protagonists - Hugh's portrayed as a straight-arrow without being rigid. He's virtuous and honest to fault without being judgemental or puritanical - when confronted with Lilith's antics he's more likely to laugh it off.

And as for Lilith - holy cats. Pun intended, she's endured a Hellish existence for 2000 years. Lucifer hates her because she's half-human, but he also intentionally made her a halfling because he gets off on watching her suffer with her dual nature. Wow, Lucifer's a prick. She loves Hugh and wishes he could save her, but at the same time is afraid that his attempts will only bring suffering down on them both. She could have been a moping dishrag, but Meljean Brook never lets her.

Instead, over the millennia Lilith evolved into someone adept at working the system, of using tactics Hell encourages (theft and deceit) to hide what humanity she's kept for herself. For example, her human apartment is filled with stolen books. According to Hell, she steals them for the evil thrill of petty theft, but really it's because she loves reading and Lucifer doesn't allow books in Hell. When you compare Lilith to, say, Sascha from Nalini Singh's Slave to Sensation, a heroine who also has to hide her true nature, there's no contest. Sascha lets her problems walk all over her until she's a whinging "woe is me" wet blanket. Lilith faces her problems and manipulates them to eke out a life for herself.

That being said, while the plot never trips up the characterization or the romance, it does trip itself up from time to time. I admit I lost track of the number of arrangements and bargains that changed sides, and I had to flip back several times in the story after an obscure deal was mentioned or a minor character who was only introduced once suddenly became important. As well, several past events from previous Meljean Brook works were mentioned, enough events to become somewhat confusing. This might have made sense if Demon Angel had been the fifth book in a series - but it's the first novel, after one short story in Emma Holly's anthology Hot Spell. I think when I read the first book in a series I should be able to do without Prequel Baggage, but maybe that's just me. That being said, I really want to read Hot Spell.

Okay, so while at times Demon Angel was a little confusing, ultimately it was a satisfying and very romantic read. I felt for both the protagonists' pain and enjoyed how neither of them gave into despair and self-pity. I liked how the fantasy aspect was well-developed and served to rachet up the romantic tension without overwhelming the romance. The characters deserved their HEA.

And I deserve to read Hot Spell, dammit! Meljean Brook's got me liking vampires again! How the hell did that happen?
B+
Posted by AnimeJune at Monday, September 07, 2009

Labels: B Plus Reviews, Paranormal, Romance