"Forget You," by Jennifer Echols 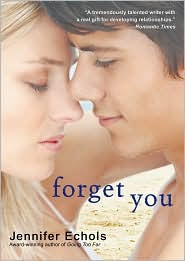 The Chick: Zoey Commander. When her relationships with her parents unravel, Zoey will do anything to keep her own life controlled and on track - with her athletic achievements, her schoolwork, and a popular football captain boyfriend.
The Rub: When she receives a concussion in a car accident and loses the last twelve hours of her life, she discovers she didn't spend very many of those hours with her boyfriend, but another boy entirely.
Dream Casting: Blake Lively.

The Dude: Doug Fox. The school's resident bad-boy charity case, he falls for the Good Little Rich Girl and thinks she feels the same.
The Rub: However, after seemingly coming to a significant emotional milestone together, Zoey wakes up and acts as if it never happened.
Dream Casting: Penn Badgley.

Zoey's Mom: I've decided to cast off this mortal coil!

Zoey: Are you crazy? I have a boyfriend!

Doug: Um, how hard did you hit your head?

Zoey: I have a boyfriend! A boyfriend named Brandon! We had sex, so we're totally going steady. Even though I've known him personally for years and know he sleeps around all the time and we haven't dated or talked or even seen each other in a week, I know this time is different. So even though you're hot and mysterious and I'm missing a huge chunk of my memory, I can't date you, Doug.

Doug: You're right - no amount of brain damage can explain that kind of denial. *reveals truth of what happened that night*

Zoey: *gasp* I am sickened, disgusted and horrified. I never want to see you again - after we have sex that is.

Doug: Wow, you have whacked-out priorities.

1 Mysterious Dude with a Dark Past

The Word: Oh, curse you, high expectations! I'm actually feeling really guilty, because this is the second time in a row that an author whose last book I absolutely A+ gushed over offered me a free ARC that ultimately didn't live up to their previous work. The first of these, of course, was Christie Ridgway's Crush On You, which didn't crush so much as firmly squeeze me.

The second is Forget You, by Jennifer Echols, she who so completely bowled me over with her flawless YA novel Going Too Far.

The novel starts off strongly, with our troubled perfectionist heroine Zoey. Despite being popular, athletic, and privileged, her life is coming apart at the seams. First, her father gets his 24-year-old human resources manager pregnant. Three months later, Zoey's mother attempts suicide and has to be committed. Desperate to keep the news of her mother's breakdown from becoming public knowledge, Zoey's secret is nevertheless already known to her worst enemy: bad-boy classmate Doug Fox, whose police officer brother was first on the scene.

Doug and Zoey have been at odds for a number of years, ever since the homecoming dance Doug missed in ninth grade because he was in juvie. Despite living in different social strata (Doug's from the wrong side of the beach), they participate on the same swimteam, so they can't avoid each other as much as they'd like to.

Still reeling from the absolute suck of it all, Zoey propositions her dim football star friend Brandon and loses her virginity to him, thinking so long as she's seen dating the popular football jock, keeps up her athletics, and maintains the image of the perfect student/daughter/girlfriend, she can pretend her life is still normal. Provided she and Doug can come to some sort of understanding so he doesn't blab that her mum's in the loony bin, that is.

Fate, however, has other plans. Zoey attends a football game and gets into an argument with Doug, and the next thing she knows, she's in her bedroom with a killer headache and no memory of the night before except a dim recollection of Doug pulling her out of her totalled car after she swerved to hit a deer. Not only that, but Doug comes to see her that morning with his leg in a cast, suddenly sweet and considerate, and he acts as if they're in a relationship.

Needless to say, Zoey is desperate to discover what happened that night, and whether or not she'll be able to hold onto her relationship with Brandon. However, her appallingly selfish father, outraged that his Hawaii honeymoon plans might be disrupted by his inconsiderate daughter's concussion, doesn't believe her claims of amnesia and threatens to have her locked up in the psych ward next to her mother. Since the last thing Zoey wants is to be compared to her crazy mom, she decides to try and piece together what happened that night without giving away the fact that she doesn't remember any of it - and doing that means confronting Doug again.

Now this sounds like a terrific premise - a girl who strives to be controlled, but has to come to grips with the fact that she's lost twelve hours of her life and the snippets of what she learns don't mesh with the person she thinks she is. However, the big, giant, recurring flaw in this story is that the main character's primary motivation doesn't make sense.

If I were to create the ultimate Forget You drinking game, I would need only one instruction: every time Zoey says "Brandon is my boyfriend," take a shot.

Zoey continually rebuffs Doug's advances, and rejects the growing realization that something happened between them, because "Brandon is my boyfriend." She lives in horror that what happened that night will get back to Brandon and make him break up with her, because "Brandon is my boyfriend." The number one obstacle between Zoey and Doug is Zoey's relationship with Brandon.

This would have been fine and dandy if not for a few flaws.
This part of the novel completely boggled my mind. I never, not once, understood Zoey's motivations for believing she and Brandon were in a relationship - or at least, enough of a relationship to serve as the main obstacle between her and Doug. For me, this goes beyond being mistaken and into delusional, or at least in hardcore denial.

I might have bought it if Echols hadn't shown us that Zoey knows Brandon inside and out. I might have bought it if maybe Brandon and Zoey had dated a couple of times along with the quickie. I understand that Zoey is emotionally vulnerable, but she bases her idea of their relationship on a single action, and yet somehow this single action is the largest obstacle to overcome in the novel.

Okay, okay, the novel tries to explain this, but not until much later in the book, and it's not entirely effective, in my opinion. The novel eventually and tentatively suggests that Zoey made a relationship out of nothing to justify her impulsive action with Brandon, thinking, "I'm not a messed-up ho if I have sex with someone with whom I share a relationship." Therefore, her actions to push Doug away and cling to the idea of Brandon stem from an attempt to rewrite her own history and make herself normal. And while this is consistent with the theme of the novel, this explanation comes so late that while it retroactively explains some of my problems with the novel, it doesn't erase the consternation and confusion I felt while reading it.

And if this were the only flaw I had with the novel, Forget You would have gotten a much higher grade. I enjoyed the characterization otherwise, and Echols has a wonderful sense of atmosphere - in the way she describes the high school relationships, the small-town's wealthy, touristy, and poverty-stricken locales, and the different sorts of people to be found in this area. I felt totally immersed in the setting and the characters.

For the most part - unfortunately, Forget You also stumbles when it comes to pacing. I realize when the plot involves piecing together the past that there's going to be a lot of narrative jumping back and forth, but Zoey's lost night still doesn't quite fit even when we learn the whole story, and the novel's ending waffles back and forth a great deal, throwing in an 11th hour dramatic reveal that felt completely unnecessary, and cheapened the significance of the, er, 10th hour dramatic reveal.

I really, really wanted to glom this book as much as Going Too Far, but it just doesn't measure up. However, I will keep it on the shelf. Knowing what I know now about the heroine's motivations, perhaps reading it with that knowledge will improve the story a second time around.
B.
Posted by AnimeJune at Saturday, July 17, 2010

Labels: B Reviews, contemporary, Romance, YA