"His Majesty's Dragon," by Naomi Novik 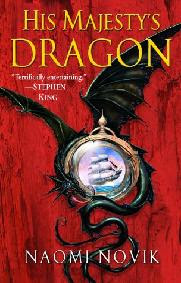 The Hero: Captain William Laurence. A loyal, up-and-coming sea captain in His Majesty's Navy, Laurence's naval dreams are dashed when he wins a dragon's egg in battle and is required to bond with it - automatically enlisting him in the Aerial Corps and depriving him of all other military privileges.
The Rub: Despite his growing affection for his dragon, Temeraire, his Navy habits don't always sit well with his unconventional Corps superiors.

Temeraire: Awesomest Dragon In the World - a.k.a. Laurence's dragon. A particularly rare Chinese breed of dragon, and one of the only ones in Europe. Likes books and shiny things.

Captain Berkeley: An older dragon captain who trains with Laurence and Temeraire. Wuvs his dragon, Maximus.

Captain Harcourt: A rare female captain, thanks to the fact that Longwing dragon breeds only accept female riders. Wuvs her dragon, Lily.

Lieutenant Granby: Bit of an ass to Laurence in the beginning, but he learns his lesson.

Captain Rankin: Ass extraordinaire. Hated by everyone because he doesn't wuv his dragon, Levitas.

1 National Hero Who Is Nevertheless An Ass

The Word: My mother tried to get me to read Anne McCaffery's Pern series. After trying to read the first book three times, and unable to finish it each time, I finally gave up on it. My mum also suggested I read Master and Commander, by Patrick O'Brien. I slogged through 100 pages before calling it quits.

Yet, despite being unable to handle either of those estimable series, when reading the start of a series hailed as a hybrid of the two, I thoroughly enjoyed it - thus, His Majesty's Dragon, first in the Temeraire Series by Naomi Novik.

Set in an alternate history where dragons and humans co-exist, Napoleon is threatening England with invasion and all of her armed forces are on alert. Will Laurence, captain of the naval ship Reliant, performs his duty for King and country by soundly defeating a dilapidated French frigate. Curious as to why such a small French ship would fight back so savagely instead of surrendering, his questions are answered when his crew discover a dragon's egg smuggled in the hold.

To Laurence's dismay, the ship's surgeon informs him the egg is close to hatching, which means someone on the ship is required to harness and take responsibility for it. A dragon left unharnessed can go feral, and England needs every dragon it can get its hands on to face Napoleon's greater draconian numbers. Unfortunately, taking responsibility for a dragon automatically enlists one in Britain's Aerial Corps, condemning one to a hard-scrabble life on society's margins, as dragons are too high-maintenance for their handlers to leave them for very long.

The crew cast lots to see who will handle the dragon, but fate trumps them all when the newly hatched reptile ignores everyone on the ship except for Laurence. Laurence is a good-hearted chap and determined to do his duty by the dragon (whom he names Temeraire after a famous ship), but he's also the gently-bred son of a lord, so the step-down in status stings quite a bit.

Laurence's status as a gentleman and his Navy upbringing set him apart when he and Temeraire are sent to Scotland for training. Here, Naomi Novik's keen grasp of setting, social history, and world-building come into play. Despite the fact that there's a clear fantasy element - dragons! - involved in the narrative, Novik still vividly conveys the early 19th-century atmosphere - not only in the setting, but in the characters' language and attitudes.

Learning how the dragons are fed and trained was fascinating - particularly how dragons are flown similar to ships - we not only have the captain riding the dragon, but midwingmen, bellmen, and riflemen as well. Novik's clever description of their ingenious dragon-riding and signalling system is brilliant, but also easy to understand.

Laurence, despite being almost too perfect (dutiful, loyal, tough but fair, quick to adapt, etc. etc.), is still a man of his time and a gentleman besides, so the haphazard, informal atmosphere of the Aerial Corps sets him ill at ease. Fastidious in his dress and manner, he's nonplussed by the Corps' need to pack light (leading to a uniformly rumpled appearance), their inclusion of women in martial matters, and the fact that many of the instructors are dragons themselves.

Nevertheless, Laurence's love and affection for his dragon grows with leaps and bounds, to the point where when he is actually offered the opportunity to leave his dragon with the Corps and return to the navy and the life he once knew, he refuses. One of the novel's lovelier elements is the great care taken with (nearly) all the dragons in the Corps - while Novik never introduces an explicit bonding or imprinting phenomenon like the Pern novels, nearly every captain shares a deep friendship with their dragon and vice versa.

Of course, as this is an introductory novel, there isn't a great deal of action, but Novik balances that out with surprisingly layered interior conflict. For example, Laurence is forced to re-evaluate his reliance on manners and his definition of what makes a gentleman, when he strikes up a tentative friendship with another rider, Captain Rankin. Still disconcerted by the relatively loosey-goosey habits of the Corps, Laurence feels comfortable around Captain Rankin, who is also a gentleman who appears to hold the social graces in as high esteem as Laurence does. However, he soon learns the man's haughty airs come at the expense of his dragon Levitas, who remains neglected and ill-cared for precisely because his captain is too busy experiencing the finer things.

I enjoyed so much of this novel - the ingenious world building, the brief but vivid moments of action, the characters both human and reptile. However, the novel's not without its rough spots. Novik's writing is disconcertingly passive, and while enough happens that I'm still engaged and entertained, her style of writing does occasionally distract from my enjoyment. As well, while protagonist Laurence is fun to read about, I kind of wish he had more flaws. He seemed almost too perfect, but I do realize this is the first book in a series and if we hate the main character we're not going to want to read the rest of the series.

That being said, this was still a hella good start to a series and I look forward to reading the next books.
A-
Posted by AnimeJune at Sunday, July 04, 2010