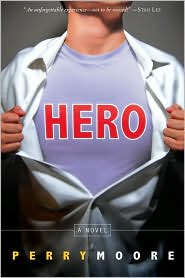 The Hero: Thom Creed. The son of a disgraced superhero, he just wants to live a normal life, play basketball, graduate high school and make his father proud.
His Angst: When Thom discovers he has superpowers, the same superheroes who turned their backs on his father want Thom to join their team. If Thom joins the League, he'll have to keep his heroics a secret from his father and his homosexuality a secret from everyone.

Hal Creed, a.k.a. "Major Might": Thom's father. Used to be a famous non-powered superhero, until a crucial mistake cost him his hand, his standing in the League, and the lives of thousands of innocents. He now slaves away at a factory to provide a solid home life for his son. Essentially, he's BatDad.

Typhoid Larry: Another teammate, he has the ability to give people diseases. Hasn't quite mastered the handshake.

Golden Boy: The super-speedy leader of Thom's team in the League. Bit of an asshole, but sad past. Has the hots for Miss Scarlett.

Justice: The most powerful of the superheroes, and leader of the League - a mix between Superman and the Martian Manhunter. Former BFF of Hal Creed.

1 Ring to School Them All

The Word: Chalk this up as another winning suggestion from The Booksmugglers. I was already intrigued by the idea of a boy having to struggle with two secret identities - (his superheroic one as well as his sexual one), but the 10-rated review from The Booksmugglers sealed the deal. While I didn't consider it as mind-blowingly awesome as the Smugglers did, it was still an enjoyable, unique, and emotional read.

Teenager Thom Creed just wants to make his father proud. Despite a litany of tragedies, Hal Creed managed to keep food on the table, a book in Thom's hand, and his head held high. Hal used to be Major Might - a famous superhero who didn't need any jumped-up, fancy superpowers. However, a superbattle gone horribly awry left Hal crippled, disgraced, and bitterly resentful of all superpowered beings. Despite all this and his wife walking out on the family in the bargain, Hal broke his back to ensure Thom had everything he needed growing up.

Thom would do anything to avoid bringing more hardship or shame on his father, so when he starts developing superpowers of his own, he feels he has to keep them secret. Of course, along with the sci-fi angst, Thom also has a very realistic, human angst: he's not only superpowered, he's gay, and he can't quite decide which secret would destroy his father more.

Thanks to a tragicomic incident in which Thom accidentally breaks the family laptop while surfing gay superhero porn (it makes more sense, and is a heck of a lot funnier, when you read it), he recklessly decides to run away before his father takes the computer to the shop and inevitably learns his secret. When supervillains hijack the bus Thom's on, Thom's burgeoning healing powers prove useful and gain him the attention of the superheroes who show up to save the day. The Superman-esque Justice, the leader of the League of superheroes, even asks Thom to try out for their probationary squad.

Despite knowing he'll have to add yet another secret to the growing roster of Things He Can't Tell Dad, Thom believes he should use his powers to make a difference. When he wins a place on the League's probationary squad, he ends up on a team of supers who are all as messed up as he is, just in different ways.

Perry Moore does an excellent job handling the novel's human plot (i.e. Thom's relationship with his father and his teammates). This plays out in the well-drawn cast of characters - none of Thom's teammates are as confident or easygoing as they appear, and despite their fantastic superpowers, their greatest hardships are as understandable as anyone's - illness, poverty, parental abandonment, a stint in supervillainy. Okay, maybe not that last one. Even more surprising is that the human plot takes centre stage, while the action-and-violence-heavy sci-fi plot is downplayed until the end.

I adored the depiction of Thom's relationship with his father. Despite the stress on Hal's life, and despite Thom's fear of revealing himself to his father, ultimately they share a loving, supportive, yet understandably unperfect father-son bond. Hal is not perfect, and his personal bigotries and bitterness place strain on Thom, but everything about his actions and his attitude so clearly demonstrate the love and care he feels for his son, and vice versa. Seriously, on the Best Dads List, they're only just behind Veronica and Keith Mars.

As well, Perry Moore shows a definite flair for awkward-humour, those moments of cluelessness we all suffer that spiral out of control into painful situations that have you laughing, cringing, and commiserating all at the same time. It starts with the Gay Porn incident, but continues throughout the novel, and it's viscerally funny, for as I read it I kept thinking, "Oh, that could totally happen to me. Um, except for the laser-eyes bit." This is ultimately what I loved about Hero, that despite the special powers and other sci-fi trappings, above all of that, Perry Moore nails the character aspect of the story, the whirring gears and wheels behind the masks and cowls.

Unfortunately, this leads to why this book didn't have me falling down in absolute worship after the last page - the sci-fi aspect seemed a bit rushed. I found myself questioning several aspects of the murder mystery, and the development of Thom's superhero identity seemed inconsistent and a bit of a deus ex machina. As well, and I hesitate to spoil this so I'm going to hint at it (but consider yourselves warned), the plotline where a significant character from Thom's past re-enters his life made very little sense and left me with nothing but questions at the end.

Finally, I had a problem with the violence, which is both cartoonish and horrifically graphic. My problem's not that there is violence in the first place - I can handle violent books. My problem is that the violence never appears until later in the book, so it jars with the tone of the novel that's been established so far. I suppose it affected me all the more because it was unexpected and didn't fit with the first half of the novel. The first half dealt with more human dilemmas and poked gentle fun at the comic-book aspects of superherodom (such as handling the media), only to shift gears into violence that seemed cruel, gratuitous, and unnecessary to the plot. I actually felt physically ill by the novel's climax.

That being said, this novel still has a unique premise, sharply-drawn human characters, and a lot of sympathetic human drama along with action and excitement. I'd definitely recommend it.
B+
Posted by AnimeJune at Thursday, July 15, 2010