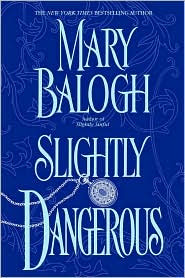 The Chick: Christine Derricks. Despite being an impoverished widow who's estranged from her bitter in-laws, she insists on looking on the brighter side of life.
The Rub: However, only a few interactions with the haughty Duke of Bedwyn convince her he's all cloud and no silver lining - so why is she so attracted to him?
Dream Casting: Kate Winslet.

The Dude: Wulfric Bedwyn, Duke of Bewcastle. Despite being rigid, proper, and supremely logical in all things, Wulfric's life hasn't been quite the same since all his siblings married and moved on with their lives.
The Rub: Surely his life could never be so empty that he'd need Mrs. Christine Derricks to fill the void - she's so uncouth and improper and unsuitable!
Dream Casting: Patrick Dempsey.

Christine: What a nice party.

Wulfric: What a dull affair.

Christine: What an arrogant prick!

Wulfric: What a vulgar young woman!

Wulfric: I find myself in complete agreement. Sex?

Christine: Sure, why not?

Wulfric: Well, I suppose, if you were amenable, we could be married.

Wulfric: Quite. *In private* HOORAY!

1 Snake in the Grass Villain

The Word: If I want to be completely honest, I didn't start reading this book with the highest of expectations. You see, Slightly Dangerous is not only a novel, but the final novel in the lengthy series concerning the Bedwyns. The final novels in romantic series with recurring characters tend to be more significant because in more cases than not, these are the novels reserved for the "most interesting" characters, that one rake who's just that much more brooding and troubled than the rest, that one female assassin whose past is just that much more mysterious, or that one couple whose vitriolic enmity is so very obviously hiding a secret attraction. Think of Villiers in Eloisa James' Desperate Duchesses series. Or Jesse (Sweet Trouble) in Susan Mallery's Bakery Sisters Trilogy.

Again, while the previous novels in the series revolve around their main characters, they also serve to hype up the mystery/angst/hate-love aspect of those special recurring characters, and these final novels in the series end up coming under especial scrutiny because of that build-up. However, truth be told, once the mystery is gone these characters rarely live up to the hype. Secret shames turn out to be run-of-the-mill Big Misunderstandings. Villainous rakes are neutered into vulnerable fluffy ducklings in disguise.

Frankly, I was expecting Slightly Dangerous to be more of the same. Wulfric Bedwyn, fondly dubbed "The Duke of Asshat" by yours truly, turns up in every Slightly book to make cold, asshat-y comments about propriety and respectability before inevitably surrendering to the romantic whims of the protagonists, with an occasional softened gaze or private crying jag to indicate he does have a heart underneath that formidably controlled exterior. How could the last book possibly do his character justice with any sort of narrative consistency?

To my delight, with Slightly Dangerous Mary Balogh manages to create a moving and realistic romance concerning Wulfric without retroactively rewriting his character into a secret cuddler.

At the beginning of the novel, Wulfric is feeling somewhat out of sorts, but he refuses to examine his feelings deeply enough to identify his problem for what it is: loneliness. His siblings have all absconded into their respective HEAs, his mistress of ten years has died, and his ginormous estate is empty. Thanks to this, he makes a rare impulsive decision to accept a friend's invitation to a houseparty. However, when he arrives, he is appalled to discover that instead of a gathering of intellectuals, it's a betrothal party for a very young couple whose equally young friends are eager to cause mischief.

However, he's not the only accidental outsider. Christine Derricks, a penniless widow, is browbeaten by her friend Lady Renable into attending the same house party as well, even though the two hostile siblings of her late husband will be there, too. She quickly achieves the dubious distinction of making two equally awful first impressions on Wulfric: the first when she accidentally drips searing lemonade into his eye (and he mistakes her for a servant), and the second when she meets him eye-to-eye in the drawing room and openly calls him on his asstastic attitude.

She succeeds both in discombobulating Wulfric and eliminating the rest of her social nervousness and she proceeds to have a lovely time. Her natural charm bubbles to the fore and she's soon the life of the party, even though her clumsiness and unladylike antics earn her the ire of Wulfric and her spiteful in-laws. Wulfric thinks Christine is a human trainwreck, but he can't look away, and his inability to curb his interest unsettles him deeply.

However, Mary Balogh knows just how to pace this romance. Wulfric and Christine don't tumble headfirst into love or even understanding during the two weeks of that houseparty. Wulfric is a thinker, a rationalizer, and the rules of the aristocracy are embedded in his very bones. He knows that Christine is completely unsuitable to be a duchess - she's vulgar, she's clumsy, she's low born, she's barren. He knows this from the outset. He can't stop watching her or feeling attracted to her, but by Nora he'll fight it as long as he can with every rationalization he can find.

However, as he and Christine keep running into each other despite their attempts to avoid each other, Wulfric eventually succumbs to the realization that he cares about her. However - he keeps rationalizing, only this time, in the opposite direction. When he finally does buckle down and decide to pursue Christine into marrying him, he goes at it with the same coolly strategic, logical, and rational determination he applies to everything else. He doesn't suddenly break into song or burst into tears or say the magically "right" thing. By wooing Christine as Wulfric, he doesn't transform into a completely different loving character - instead Mary Balogh shows us that aspect of his character's been a part of him all along.

And Christine's no slouch of a character, herself. While there's definitely a Pride & Prejudice vibe going on here, Mary Balogh deftly demonstrates how she's Wulfric's perfect match. Just as the Duke of Bewcastle is notorious for lowering the temperature of every room he enters with his chilling hauteur and intensely private nature, Christine can't help but bring light and happiness to everyone around her with her ability to laugh at herself as well as others. However, Christine's social ease in society and around other men turned into a double-edged sword when her husband's jealousy and insecurity eventually soured their marriage. She's conflicted - while at ease with herself, she does suffer moments of hyper-consciousness of how tawdry she looks in comparison to the perfection of the ton.

Thanks again the great characterization, the opposites-attract element of the romance also poses one of its most difficult obstacles. Christine has trouble reconciling her attraction to Wulfric with her perception of him as being cold and emotionless, and has trouble grasping how two people so different could make each other happy in the long run, especially considering her first marriage to a man who was also her vast superior in rank.

Even while reading this story, I had trouble with my emotional grade and my objective grade. Emotionally, I'd rate this book a B+, because I liked and appreciated it but didn't love it. Objectively, however, there's too much that's good about this book to let it lower the novel's grade. Objectively, I adored the characterization - not only of the protagonists, but also of the villain, a character who turned out to be a real surprise and one of the most subtle and insidious baddies I've ever read, which was pretty refreshing for a genre where the villains are usually telegraphed from the very beginning. As well, I liked how the other Bedwyns were included into the story without being intrusive.

Finally, I also took into account how Slightly Dangerous fits as a final chapter in the Bedwyn saga, and how it remain absolutely consistent with the character of Wulfric while also managing to be wholly and realistically romantic. I think in this case, it works beautifully as a final chapter - while his siblings do have parts in the story, they serve more as reminders of how each of their stories have helped shape and prepare Wulfric for his own. The way he stood up for Eve in Slightly Married, how he came to Judith's defense in Slightly Wicked, how his interference set the stage for Freya's romance in Slightly Scandalous, learning the truth behind his botched first engagement from Gervase in Slightly Tempted, to enduring the heartbreak of Alleyne's "death" and miraculous return in Slightly Sinful. They've all paved the way for him to finally realize that some things cannot be ruled or controlled - like love.
A
Posted by AnimeJune at Tuesday, July 20, 2010