"A Hint of Wicked," by Jennifer Haymore 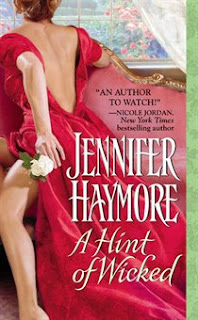 The Chick: Sophia, Duchess of Calton. While she dearly loved her husband Garrett, eight years after his death she was lucky enough to fall in love again and marry Tristan, her late husband's cousin.
The Rub: When Garrett miraculously returns from the dead, he demands she resume her role as his wife and abandon Tristan for ever, and the law is on his side. But she can't just cut Tristan out of her life - however, neither can she leave Garrett.Dream Casting: Sophia Myles.

The Dude: Garrett, Duke of Calton. Having suffered through eight years of brain-damage and memory loss, he is not at all pleased to get home to find his wife shagging his best friend.
The Rub: However, even as he longs to cling to her, he fears that his deteriorating mental state may put her in further danger.Dream Casting: Kevin McKidd.
The Other Dude: Tristan, Lord Westcliff. While just as grief-stricken as Sophia when Garrett vanished after the battle of Waterloo, now that Tristan's finally wed to the woman he's always loved, he's not going to give her up. Even to his former best friend.
The Rub: The only trouble is, Garrett married Sophie first, which legally nullifies Tristan's marriage to her.
Dream Casting: Matthew Bomer.

The Plot:
Garrett: I love you, perfect wife!

Sophie: I love you, perfect husband!

Tristan: I love you both - in a totally friendly, not at all resentful third-wheel way!

Tristan: So...what it's been, what, seven years? Think we can marry?

Garrett: HOLD UP, Y'ALL. Hands off my woman!

Tristan: Yeah, you and what army?

Sophie: I am so sad and conflicted, and yet I cannot bear to show spine and choose. I shall be as neutral as a Swiss.

Garrett: What a coincidence, because my memory's full of holes.

Suspicious Assistant Fisk: BTW, I secretly want to murder all of you and run away with your hawt dumb sister!

Garrett/Sophie/Tristan: HELL TO THE NO. WONDER TRIPLET POWERS, ACTIVATE!

Hawt Dumb (Sequel-Baiting) Sister: Like, chill, you guys! I'll be back for the sequels!

1 "Did I Sit in Something Wet? C'mon, you can tell me" Cover Artwork

The Word: What can I say about this book? Well, the foremost emotion I experienced reading this book was anger. I felt angry at the characters, at their thought processes and decisions with which I completely disagreed, at the unfair situation, at their asshat behaviour, and at the book's complete lack of romantic development. And yet, after reading the pleasant blandness of Outlander, I can now safely say I prefer to be angry and engaged with a book than pleasantly disengaged.

The reason I was eager to read this book was because it is a true rarity in romance - a legitimate Love Triangle. Two guys, one girl, no menages allowed (apart from one squicky dream sequence). And, to be fair, author Jennifer Haymore sets up a truly prickly situation that doesn't really place any one person in the wrong.

Garrett, Tristan and Sophie used to be one of those super-BFF-4evah teams that pop up in romances wherever Idealized English Countryside is abundant and Good Parenting is lacking. Eventually, Garrett marries an adoring Sophie and with Tristan, they continue their superfriend shenanigans until the day Garrett is declared dead at Waterloo.

Sophie and Tristan are grief-stricken, but in their bereavement (Tristan loses his own wife a few years later), they find love in one another and marry. However, in a scene that redefines the word, "awwwwwkward," Tristan and Sophie discover that Garrett is, in fact, alive - when he bursts in on them having Consensual Bondage Funtimes and (rather understandably) interprets the situation in a negative way.

It turns out Garrett spent the last eight years in Belgium suffering from Ye Olde Amnesia. Having only lately recovered his memories, he came home expecting everything to be the same and is outraged, hurt, and betrayed to find his beloved wife in love with another man. He loses little time in exerting his legal authority and using his Convenient Army of Sleazy Henchmen (they're plentiful in Belgium, apparently) to keep Sophie and Tristan apart. Sophie, he determines, was his first and will be his again, and Tristan can go screw something other than Garrett's wife for a change.

Irrational? Yes. Understandable? Also yes. I recognize Haymore's attempt to make it difficult to take sides but I fairly quickly landed on team Garrett, for the reason that while both male protagonists act like Selfish Caveman Dicks, Garrett has the excuse of being brain-damaged and having suffered through poverty and enslavement for the last eight years.

Also, through Garrett's POV, we see the instability of his mental state thanks to his injury, and how much he relies on the normal, on the expected, on the fair, to maintain his sanity - even though it's clear that sometimes, life just isn't fair. Part of his attempt to keep Sophie by his side is because he genuinely loves her, but part of it is also his desire to maintain the "fairness" of the world. It wasn't his fault he didn't see Sophie for eight years - so why should he be punished for it by losing her to someone else?

Tristan, however, spends a good chunk of the book behaving like a ludicrously self-absorbed prick, until even I wished he would go away. We learn through explicit and tedious exposition that, oh, he's always loved Sophie, even from the very start - he just "let" Garrett marry her first and got himself a place-holder wife (poor gal) because he was a Nice Guy who finished Last. He spends the vast majority of this book thinking only of himself and his nether regions, like a dog with a bone that's been taken away - mine, mine, mine.

His best friend's back from the dead after having endured years of suffering and abuse and Tristan continually treats Garrett like dog crap for having the audacity to remain alive and return to the land and the friends he grew up with. I never really considered his actions or motivations to be founded on love at all, since he never really considers the consequences of his actions beyond how the outcome will benefit him. He continues to fight for Sophie after the courts nullify their marriage - so what does he want, a divorce? Yes, something incredibly expensive and difficult that will not only tarnish Sophie's name for ever but will tarnish Sophie and Garrett's daughter Miranda - the girl Tristan's raised as his own for seven years. Sorry Miranda, Stepdaddy's dick comes first.

Look, I understand that Tristan and Sophie are in lurve but Tristan doesn't give Garrett a scrap of slack until the last quarter of the book. He doesn't have the excuse of being helpless and damaged and lonely and frightened like Garrett - he lived untroubled in the lap of luxury for the last eight years. I wanted Tristan to suck it up, be a man, and stop whining.

Other than the requisite Cavemanosity of our heroes, the characterization's not too bad - with one glaring exception: Garrett and Sophie's daughter Miranda is the most unrealistically written child I've read this year - it's like Haymore tried to write her as a thirty-five-year-old, remembering only at the last minute that Garrett's only been missing for eight years. Seriously, Miranda acts and behaves like some weirdly ageless prophet-child from Dune. The spice must floooooow, Sophie - marry Garrett!

I did enjoy the subtle establishment of Sophie's maturity in the wake of Garrett's disappearance. She was a naive girl when they married, but grief made her an independent and strong-minded woman who cannot be the same person to Garrett as she was eight years ago. Her refusal to immediately choose between Tristan and Garrett was both enjoyable and frustrating - I liked how she wanted to give Garrett and their vows a chance, but there are certain moments where likening her to a passive rope caught between two snarling dogs wouldn't be inaccurate. I wanted her to show a bit more spine, and when she finally makes her choice, I felt I'd been told instead of shown her reasoning for it.

Which leads me to my biggest complaint about this book - it's not really a romance. Sophie is already in love with both Tristan and Garrett. Nothing about her relationship to either of these men significantly changes within the pages of this book. I kid you not, both her romances develop off screen. We, the reader, don't get to see any of it. Not a damn thing. We "arrive" in the story when Sophie and Tristan are already in full-swing (just an expression - they don't actually use a swing anywhere in the book, but I wouldn't put it past them). The most we get are bare snippets of backstory wedged in between purple prose about how in lurve they are. This severely weakened the story for me. I read romance because I need to see the love grow in order to believe it once it blooms. So not only did I not buy the romance, I didn't buy the ending nor her ultimate choice.

So is this book terrible? It's more mediocre than terrible. It's infuriating, it's imperfectly paced, and it's silly, but it's not out-and-out awful. Some of the situations in the book are handled with remarkable sensitivity but by the last page I felt nothing as keenly as disappointment for the book it could have been.
C+
Posted by AnimeJune at Tuesday, October 26, 2010

Labels: C Plus Reviews, historical, is it romance?, Romance