"One Night for Love," by Mary Balogh 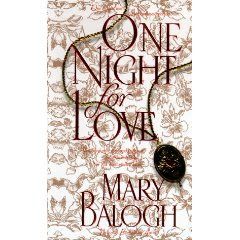 The Chick: Lily Doyle. Where her sergeant father is killed in an ambush, her father's superior officer offers to marry her. Mere hours later, however, she is shot and captured.
The Rub: After months of captivity and torment, she finally makes her way back to England - only to find her husband about to marry another woman.
Dream Casting: Dianna Agron.

Neville: We're about to be married. Isn't this nice?

Lauren (Heroine of A Summer to Remember): THIS IS THE HAPPIEST MOMENT OF MY LIFE. NOTHING COULD POSSIBLY RUIN THIS MOMENT AND DESTROY THE LAST VESTIGES OF MY SELF-ESTEEM.

Lauren: NO DON'T WORRY ABOUT ME, I'M PERFECTLY FINE AND HAPPY AND TOTALLY NOT DEAD INSIDE. I'M REALLY NOT HARBOURING MURDEROUS THOUGHTS AGAINST YOUR WIFE AND WALLOWING IN SUICIDAL DEPRESSION.

Neville: Well, at least I still have you, Lily!

Lily: Well, frankly, no. We can't be together. It just doesn't make sense. For one thing, I can't read.

Neville's Cool Aunt: I can teach you!

Secret Dad: SURPRISE! You totally are!

Lily: Well that was easy.

Neville: Except for one thing....

Lauren: HAPPY HAPPY HAPPY, I'M TOTALLY HAPPY. NOT EMOTIONALLY SCARRED OR RIDDLED WITH ABANDONMENT ISSUES OR DEVOID OF PASSION AT ALL. IT'S NOT LIKE I'M COMING COMPLETELY APART AT THE SEAMS IN A MANNER THAT CAN ONLY BE SOLVED BY A STAND-ALONE NOVEL THAT WILL SPIN OFF INTO A FANTASTIC SEVEN-BOOK SERIES.

1 Unhinged Romantic Rival Who Gets Her Own Book

The Word: Romance, as I've come to understand it, is a battle between fantasy and reality. Every romance fan reads romance differently, and as such, every reader prefers a different reality-to-fantasy ratio. I've always enjoyed Mary Balogh because she maintains a fine balance between fairytale coincidence and historical realism, and she utilizes this skill in a particularly gutsy manner in her 1999 novel, One Night For Love.

Neville Wyatt, the earl of Kilbourne, is compassionate, responsible, and dutiful. As the story begins he's standing at the altar, three seconds away from seeing his bride, Lauren Edgeworth, walk down the aisle. They've been affectionate friends since their nursery days, and Lauren is everything a future countess should be: elegant, cultured, educated, well-bred - as well as generous and kind.

However, before the wedding can proceed, a ragged beggar woman bursts into the church and puts a halt to everything. As it turns out, Neville cannot marry Lauren because he's already married - to this thin, illiterate commoner, sergeant's daughter Lily Doyle.

A year and a half ago, Neville joined the army as a form of parental rebellion, and fell in love with the daughter of his sergeant. When her father was killed in an ambush, Neville offered to marry her - as the wife of an officer, she would be guaranteed fair treatment if they were ambushed again. Lily reciprocated his feelings and they shared a tender, romantic wedding night. The next day, however, he witnessed her get shot in the heart moments before getting clonked on the head himself, and he returned to England believing she was dead.

Lily's return serves as the catalyst that cleaves everything in two. On the one hand, Neville is overjoyed to find his wife is alive. On the other, his blameless fiancee Lauren is utterly humiliated and his family is appalled.

Lily, too, finds herself torn. As it turns out, being the wife of an officer protected her from very little of the ravages of war. The only thing that kept her going through her months of captivity and torment at the hands of the Spanish was her memory of her husband. However, in her ignorance she assumed that Neville was simply a wealthy man who owned a large house. Suddenly realizing the true scope of Neville's social superiority - not to mention getting a gander at Neville's gorgeous almost-wife Lauren - fills her with terror.

Mary Balogh divides One Night For Love into different parts, a surprisingly effective pacing method. In the first half of the novel, Neville and Lily deal with the painful aftermath of her miraculous reappearance. Neville is overcome with horror and guilt when he discovers what Lily endured, and longs to make it up to her, to protect her and cherish her. But he can't protect her from everything - like his sister's overt hostility. Or Lauren's bleak, increasingly-unhinged unhappiness. Or Lily's own misery at the enormous and sudden expectations placed upon her as the new Countess of Kilbourne.

In this part of the story, Lily and Neville lose little time in discovering that they still love each other. But the novel's not even half over. Where could One Night For Love possibly go from here? In a surprisingly ballsy, intriguing direction. By the halfway mark, Neville discovers that, thanks to the original wedding papers getting lost in the war, he and Lily aren't legally married. When he breaks it to Lily as gently as possible, vowing he'll marry her privately by special license, he doesn't expect this reaction from her: "Thank God."

Lily refuses to remarry him, and a heartbroken Neville doesn't understand until Lily says, "Love is not enough."

That sound you hear is a hundred thousand housemaids-turned-Duchesses falling off their collective settees in a dead faint. Yes, Lily dares to declare, in the middle of Romanceland, that loving Neville is not enough for a happy marriage. You mean, love can't move mountains? Celine Dion lied to me!

Lily's love for Neville amounts to happiness when they're alone together, but it doesn't protect her from the feelings of inadequacy and inferiority and isolation she experiences everywhere else. To put it bluntly, at the start of the novel Lily is not qualified to be a countess. She can't read, she's ignorant of politics and manners, and she doesn't know how to do household accounts. Other romance novels treat luuuuurve like a Magic Eraser that conveniently eliminates all these problems so the Duke and his cowherd bride can traipse on down to the waterhole, tra-la-la-ing all the way, returning home in time to have a hundred fat, towheaded babies. But Lily refuses to subject Neville to a marriage that is unequal in nearly every way - emotionally, intellectually, and socially.

But the running theme in One Night For Love is identity. Lily continually has to adapt and reconsider her identity and who she considers herself to be. First she's a sergeant's daughter, then a wife, then a rape survivor, then a countess. By the end of the novel's halfway mark, Lily realizes that no marriage between her and Neville will work if she constantly remains a person who needs to be rescued and protected from society. So when she turns down Neville's proposal and takes employment with his Cool Aunt as her companion, Lily decides to pursue the learning and education she never received following her father's regiment.

The second half of the novel is just as thought-provoking as the first, for now Neville has to do the emotional heavy-lifting as he considers whether he wants Lily to develop and change and whether he'll still love the new person she becomes. He kind of wanted to be the white knight who protects his lady, but as the power dynamic between them slowly shifts in Lily's favour, they both come to terms with what identity really means and whether education and experience can truly influence someone's personality.

Every time I expected Lily to act like a martyr, she doesn't - which is kind of refreshing considering Mary Balogh lurves heroines who put up and shut up. But even when Lily says and believes things that seem a little silly and melodramatic (such as her longing to "be the moment" and walk barefoot to be in communion with nature, etc. etc.), I always found myself admiring and respecting her, for in One Night For Love, she doesn't let love solve all her problems - she sets out to solve them herself. Of the couple, she is the practical one and Neville is the emotional one who can't understand why they can't be together for ever and ever right now. As a character, he's a bit in the background. He spends much of the first half of the novel smiling kindly and wringing his hands, only really self-examining himself once Lily exerts her independence.
One Night for Love is easily one of the better Baloghs I've read. A Secret Parentage Plot that is Super Obvious from the Get-Go ("mysterious locket my father gave me that I'm never supposed to take off" is always Plot Device Code for "I'm a Secret Baby") and an unnecessary suspense subplot that is bizarrely solved entirely off-screen took away from the novel's overall strength - but otherwise, I definitely recommend One Night For Love.A
Posted by AnimeJune at Sunday, October 03, 2010