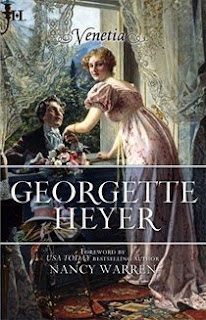 The Chick: Venetia Lanyan. Raised in the country, she's only got a sheltered existence and possible marriage to a dull country gentleman to look forward to.
The Rub: The wicked Lord Damerel provides a nice jolt of excitement - but is he really as wicked as everyone says?Dream Casting: Amanda Seyfried.

The Dude: Jasper, Lord Damerel. Everyone thinks he's just a scurrilous rake, and he's fine with that - until he meets a girl who believes he could be more than that.
The Rub: However good Venetia believes him to be, he knows taking advantage of someone as sheltered and good as her would be the lowest sort of treachery.Dream Casting: Robert Downey, Jr.

Venetia: You're a perv!

Damerel: Hells yeah. I've also got your injured brother up at my house, so you'll have to see me to see him!

Venetia: Oh! How kind! You're not a perv!

Venetia: In fact, you're awesome!

Damerel: Okay, this is making me uncomfortable. Let's end this.

Secret Mom: BTW, Vennie, I'm totally scandalous and not dead so that whole perfect reputation of yours doesn't mean beans.

The Word: When one of my readers and frequent commentators on my blog, Vorkosigrrl, told me she wanted to send me a favourite book of hers in order for me to review it, I said "yes" (because I loves me some free books), but with some trepidation. There's always the possibility that I won't like it - or even worse, that I'll hate it. As much as I'd love to follow popular opinion, there are some books that, despite being beloved by many people in the romance community, I Just Don't Like. Nalini Singh's books are an example. C.L. Wilson's are another. I courted a mild bit of controversy when I hated Lisa Kleypas' Dreaming Of You, because I thought the heroine had the intellectual prowess of a baby distracted by the jangle of car keys.

My trepidation increased a fraction when the book I received in the mail turned out to be Georgette Heyer's Venetia. Now, I enjoy Georgette Heyer, but I don't love her. Her books are never unpleasant and frequently amusing and entertaining but it's hard for me to flat-out adore them.

Georgette Heyer writes in a very authentic 19th century style - however, as a result, she rarely delves into the minds of her characters, their personal feelings or motivations. The reader has little to go on when examining her characters but their dialogue and actions. Now, this isn't bad in itself - but some of Georgette Heyer's protagonists aren't emotionally demonstrative. They tend to be affable, wry, but scrupulously polite, or in the case of the Duke of Avon, cold, manipulative and scrupulously polite. So when neither the POV nor the characters' actions take us very deeply into their psyches, I find it hard to connect emotionally with her books. I'll always like them, and objectively admire the research and writing style, but I'm not swept away or particularly involved by her characters. This is why I couldn't glom onto These Old Shades or False Colours.

This also explains why I enjoyed Devil's Cub and Powder and Patch - Devil's Dominic is very open about his feelings, whether they're good or bad, so I felt more connected to his character, and really liked reading how he comes to grips with the consequences of being a selfish ass. Meanwhile, in Powder and Patch, the characters are primarily motivated by emotions - Cleone's emotional behaviour often results in her doing Damn Stupid Things but they're always understandable, while her love Phillip turns into a dandy to recover from the hurt of being rejected.

So was Venetia the rule or the exception? Well, a bit of both. The title character lives a very narrow and ordered life - not by her own design, but she's smart, cheerful, and naturally resilient enough to remain content with what she has. Her self-absorbed and reclusive father kept her in the country for all of her life, and after his death, she remained there to take care of her crippled but brilliant brother Aubrey and the family estate while their eldest sibling Conway avoided his responsibilities while serving in the army. She entertains herself by reading, cleaning up estate affairs, and avoiding the two vastly different yet equally determined suitors for her hand - the prim and proper Mr. Yardley, and the melodramatic and emo Mr. Denny.

Venetia gives him a sharp and offended set-down, which only piques Damerel's interest in her. He thinks he's found the perfect opportunity to challenge Venetia when Aubrey injures himself near his property, requiring him to convalesce at Damerel's estate. Damerel expects to be confronted by an enraged or scandalized Venetia, and so is taken aback when Venetia arrives full of gratitude and goodwill. Venetia, unlike nearly everyone else in the neighbourhood, is willing to judge Damerel only on the basis of his present actions rather than his scandalous past, and as Aubrey recovers, the two spend more and more time together at his estate, to the consternation of Venetia's well-meaning friends and suitors.

It's probably no surprise that the character I enjoyed most was Venetia herself, and how she serves as the animated figure at the centre of the novel's theme of innocence. Now, I've bitched and moaned time and again about how many lesser romance novels conflate "innocent" with "behaves like a five-year-old" and I'm happy to say that this novel isn't one of them. Venetia is sheltered, that's one of the main barriers between an ultimate relationship between her and Damerel - as Damerel comes to care for her more and more, he can't help but fear that he's taking advantage of her inexperience.

Thanks to her selfish father, Venetia never had a come-out or a London season and she's only visited town infrequently. Her circle of acquaintances is very small and mainly comprised of older people. Both her suitors are the result of her cloistered existence - Yardley is one of the few people her father would permit to visit their estate, and Mr. Denny is the younger son of her close friend Lady Denny.

Venetia is innocent but she's not unintelligent - she and Damerel have several lively dialogues involving complicated literary quotations, for instance. However, her sheltered existence and lack of practical experience do give her an advantage in the sense that she is prepared to take people at face-value, and judge them on the behaviour they exhibit right now rather than dwell on the scandals they wreaked in their past. As her conversations with Damerel clearly demonstrate, she knows exactly what his innuendos mean and she's not afraid to be frank with him - however, she judges him on the fact that he's exhibited nothing but kindness and flawless hospitality towards her brother and herself.

Damerel is harder to get into, but that's mainly because he's not in seen as frequently as Venetia - this is her story, after all, far before the time when conventional romances started giving heroes equal head-time with heroines. That being said, what we do see of him is evocative and involving. He's been a Bad, Bad, Man - but before that, he was an impulsive, heartbroken boy the same as anyone else. When he first arrives, his behaviour is strongly seasoned with bitterness - he dislikes bearing the brunt of prejudice only less than he dislikes himself for providing such a good reason to be prejudiced against. His misguided but noble attempt to "save" Venetia on account of her ignorance demonstrates how far his character has come.

This is ultimately what I appreciate about Georgette Heyer - the tropes she used then are very common now, but reading her helps me understand how they came to be tropes in the first place, and why they work (when they're written well, at least).

So, what didn't I like about Venetia? Once again, the pacing - Heyer is a rambler, and will gladly fill up pages and pages with nonsequitors and characterizations and funny stories that ultimately have nothing whatsoever to do with the main narrative. Again, not unpleasant, but it makes it hard to stick with the story of a book when so much is narrative fluff. I wish there'd been more Damerel - he seemed like such an interesting character. Lastly, I felt a surprise came up at the end that really didn't need to be there and felt a bit melodramatic.

Ultimately, I had a good time reading Venetia and enjoyed her characters - nonetheless, it wasn't a total glom for me. I still felt a little detached reading it. Nonetheless, if you're a fan of Jane Austen and romantic Regency comedies, it would be worthwhile to give Venetia a look.
B+
Posted by AnimeJune at Monday, October 11, 2010