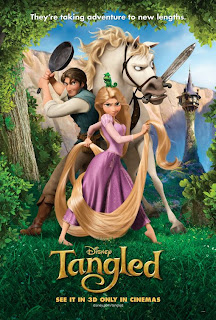 I was really worried about seeing this movie, y'all. Downright anxious. I liked The Princess and the Frog, Disney's previous attempt to reinvigorate the animated musical, but I didn't love it. Moreover, as the press for Tangled came out, heavily marketed towards male audiences (the rock-music-flavoured trailers, the title change from Rapunzel, the preview that strongly emphasized the male character, Flynn, over the freakin' title character Rapunzel), I got more and more worried.

Not that the movie would be bad - marketing is marketing. I read romance, folks, so I've already been trained to see a lot of cover art and blurbs and previews as counter-productive. No, I was worried that, after waiting for more than three years since Enchanted, my expectations would be so damn high that no movie could hope to live up to them.

I have never been so glad to be wrong.

In the movie, the rapunzel is not a radish craved by a desperately hormonal pregnant woman, but a magical flower with the power to cure the sick and heal the injured. For centuries, however, a selfish woman named Mother Gothel (played by the stupendous Donna Murphy) kept the plant hidden so she could hoard its magic and keep herself forever young and beautiful.

However, Mother Gothel's luck runs out when soldiers of the king uncover the flower, uproot it, and carry it back to the castle to save the queen from dying in childbirth. The queen survives and the flower's magic lives on in her baby girl and her beautiful golden hair - until Mother Gothel returns and steals the child to raise as her own personal fountain of youth.

Years pass, and Rapunzel (voiced by Mandy Moore) remains in her tower, entertaining herself by acquiring a multitude of lucrative skills (including baking, painting, candle-making, and darts). Despite her mother's enormous efforts to depict Rapunzel's tower as the only thing that protects her and her healing magic from a terrifying, exploitative world, Rapunzel longs for freedom. She's particularly keen to visit the nearby kingdom and its beautiful floating-lantern festival that just happens to coincide with her birthday.

Meanwhile, from that very kingdom flees a dashing thief known as Flynn Rider (played by Zachary Levi). After stealing a priceless crown and double-crossing his thuggish partners, he discovers Rapunzel's tower by accident and tries to use it as a hideout - clearly underestimating the power of an overenthusiastic teenage shut-in armed with a frying pan. Rapunzel, wily gal that she is, offers the captured Flynn a deal: she'll return his loot if he escorts her to the kingdom for the festival and back again.

And thus starts our story - and it's just about as good as all the classic Disney movies I remember. The most impressive thing about Tangled is how much the story manages to accomplish in so little time. The story doesn't just focus on the grand adventure and the magical lost-princess story, but also on the emotions of our characters. This is one of the few Disney movies were I completely, unironically believed the romance between the protagonists that sprouts up within a couple of days (these Disney Princesses love their short courtships, don't they?).

Despite what the marketing will tell you, while Flynn is a hilarious character and he definitely gets his own arc, Tangled is still Rapunzel's film. Because, after all, Mother Gothel was never the only person keeping Rapunzel in that tower - part of that was Rapunzel's own doing. There's a hilarious montage after leaving the tower where Rapunzel swoops between exuberance at her new freedom and guilt at disobeying her mother. She doesn't blithely run off and forget her parental figure (a la Little Mermaid) or disgard the responsibility she feels she has to the healing power of her hair. Neither she can she completely eliminate the nagging possibility (planted in her mind by Mother Gothel) that her desires to live free and be her own person are selfish.

That, in turn, just makes Mother Gothel probably one of the best-written Disney villainesses in years, if not ever. Mother Gothel's about a zillion years old, but that's thanks to the magic flower. Other than that, she's a regular woman - no magical powers, no nasty minions, no plans for world domination. Just an utterly selfish human being who's managed to keep Rapunzel isolated with her words alone - she's not only raised Rapunzel to believe the world is a scary place, but that Rapunzel is too naive, clumsy, and inept to survive in it. This is perfectly demonstrated with her show-stopping musical number, "Mother Knows Best," a song that is awe-inspiring for the sheer number of Mommy Issues Gothel inflicts on Rapunzel in only a couple of verses.

Which leads me to yet another thing I adored about this movie: the music. Alan Menken and lyricist Glenn Slater craft a seriously catchy number of songs to flesh out the story - songs that not only maintain the classic fairy-tale feel but also inject a lot of humour and nuance. Yes, we have the standard "I Want" and "Holy Crap We Were In Love The Whole Time" songs that Alan Menken does so very well ("When Will My Life Begin" and "I Can See the Light," respectively), but we also have the deviously diva-esque number "Mother Knows Best," the comedy romp "I've Got a Dream," and a wonderful score as well. Alan Menken is the man who taught me to love film scores as much as songs with lyrics, and he maintains his high standard in this movie.

Lastly, even animated films require good vocal performances to carry the story, and the actors don't skimp here either. Mandy Moore is already a well-known singer, so the fact that she managed to carry off the musical numbers without sounding like, well, Pop Star Mandy Moore is a testament to both her talent and commitment to the material. Zachary Levi is equally awesome as the one-line-spouting Flynn.

But really, all in all, Tangled is flat-out a wonderful fairy tale movie. It runs with the magic and the angst and the beauty and the drama and it does it all with passion and sincerity - despite the successes of snarkfests like Shrek it never gives in to the easy ironic jokes that could be made. Sitting in that theatre, I felt like I was three, five, six and 22 again - i.e., I felt the same as I did the first time I saw The Little Mermaid, Beauty and the Beast, Aladdin and Enchanted. I felt swept away by a totally gorgeous, immersive story.

In case you're wondering, I'm off to listen to the soundtrack for the umpteenth time.
A+
Posted by AnimeJune at Thursday, December 09, 2010

Labels: A Plus Reviews, Fantasy, Movies