"Since the Surrender," by Julie Anne Long 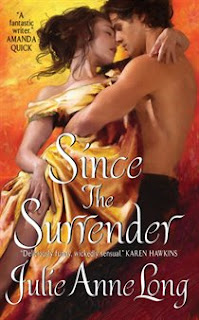 The Chick: Rosalind March. When her sister goes missing, the recently widowed Rosalind is desperate enough to ask her husband's former right-hand-man, Chase Eversea, for help.
The Rub: Thanks to an illicit smooch between her and Chase that got him moved to another regiment years ago, there's some pretty stormy water under that bridge.
Dream Casting: Rosamund Pike.

The Dude: Captain Charles "Chase" Eversea. An honourable former soldier who is still recovering from a war injury, the last thing he needs is to reunite with Rosalind, the biggest reminder of his most dishonourable mistake.
The Rub: However, the one thing he can't resist is a challenge - both to find out who's been kidnapping girls, and whether the now-widowed Rosalind is as receptive to his charms as ever.
Dream Casting: Hugh Jackman.

Rosalind: Chase, I need your help!

Rosalind: Give up my widowed independence? Like hell I will. You're not hurt, are you?

Rosalind: Also this mystery somehow involves puppets. You're not afraid of puppets are you?

Chase: *from very far away* Like hell I am!

Chase: To hell with it! HOORAY!

The Word: If I had to categorize this book in one word - it would be odd. Not necessarily in a bad way, but out of the other Julie Anne Long books I've read and adored, well, it seemed a bit all over the place. We have a mystery that involves puppet shows, we have a surprise! magical healing power, an artist who likes drawing naked ladies more than the average fellow, mermaids, elaborate theatre sets, painted angels giving blow jobs ... and a hero and heroine that don't quite register - at least not as well as her previous characters.

We also have the Wall of Stupid. But we'll get to that later.

The story starts out with some nice tension and drama. War veteran Captain Chase Eversea has been banished from Pennyroyal Green for the criminal offense of being a Gloomy Gus and remaining unentertained by his brother Colin's descriptions of inseminating cows by hand. Well, officially he's been tasked to go to London to see if the new man they've hired to be Pennyroyal Green's vicar is up to the task.

While in London, he receives a written plea for help from the last person he ever wanted to see again - Rosalind March, the widow of his former military commander, Colonel March. Years ago, Chase (nigh unwillingly) developed an attraction to her, and the two shared a passionate kiss. The next week the Colonel shunted him into a different regiment before the Battle of Waterloo, a battle that resulted in a leg injury that still pains Chase and requires the use of a cane.

Rosalind, however, is desperate - her silly, featherbrained sister has mysteriously vanished from Newgate prison after pulling a Winona at a jewellery shop, and the person she believes responsible is one of Chase's close, personal friends. Oh - and a mysterious, fake-Italian painting in an isolated, dusty museum is somehow related to her sister's disappearance.

Chase takes in her story with several pillars' worth of salt and refuses to help her, but changes his mind when he notices a painting of a suspiciously similar style while getting drunk in a brothel (don't ask). He's further motivated to assist her when he catches her spying on a group of his inebriated manfriends, and when catching turns to impassioned groping, and groping leads to the discovery of a pistol tied to her garter - he realizes if he doesn't help her she's doing to do something even more ridiculous.

But that's not the Wall of Stupid. That comes later. Let's discuss what I liked about this story first. The writing, mainly - Julie Anne Long's style is so, so lovely, that it's capable of papering over so very many sins. It's lovely enough that while I was reading the story I really enjoyed it, only realizing later the oddities and randomness and sharp bits that stuck out.

So - what I didn't like. Firstly, I didn't get the *drama* between Chase and Rosalind. At the start of the novel, when the both characters are just hinting at the bad blood between them, I had in mind something truly awful and tragic - which of course made me crazily interested to learn what could have Chase act so angry and make Rosalind feel so guilty.

Then I learn it's a kiss. That's it. Okay, so she's married, but after one kiss, she says, "Um, no more of this, thanks. It's wrong." Five years pass after that.

That's it? Really? I dunno, maybe I'm desensitized from reading Dark and Scandalous Pasts, but this seems a pretty small potatoes reason for the Extra-Strength Angst and Guilt Rosalind and Chase share between them.

That's not to say they don't make a good team - once Rosalind is taken in hand, of course. Thankfully, she doesn't manage Rebecca Tremaine levels of TSTL-ness, but a lot of her actions, beliefs and decisions seem out of character for the practical, military wife we're told she is. And for someone who claims to want her independence, she's pretty easily manipulated.

Chase is a more relateable character, at least to me. Yes, he's dealing with a permanent war injury (a Dr. House-ian leg of pain), but he doesn't make it a Giant Festering Wound of Angst, nor does he feel it renders him unworthy of the heroine's affections, which is refreshing. However, if you were to ask me what the true obstacle between Chase and Rosalind was, I wouldn't be able to tell you. Okay, Rosalind wants to wait a while and soak up some capital-I Independence before jumping back into the Marriage Game, and Chase wants to have a lot of sex with her - but he wants her to want it, I think. So he basically spends most of the book either solving the case or trying to subtly make Rosalind as horny as possible.

Which is fine. By fine I mean, okay but not my cup of tea. Tolerable because the poetic writing made it sound more romantic than sleazy.

But then we meet the Wall of Stupid. One minute, I'm tripping along, buying all sorts of random odd nonsense (again: mermaids, ghosts in hats, paintings of farting cows) until I run into the plot development that is Too Damn Stupid for me to get around. It grinds me to a complete stop.

Now, I'm buying into the hero with his dual purpose of Solving the Crime and Layin' the Lady, but then the two goals coincide horribly. Let's just say, after several days' worth of investigation and innuendo, Chase and Rosalind discover that shady things are afoot at the more-or-less abandoned museum they found the original painting in. Men come in but they do not come out. Mysterious, girlish giggles are heard in the walls. So Chase and Rosalind very sneakily break into the museum where Bad Shenanigans are Most Certainly Going On, then proceed to have very torrid sex against an ancient bureau. And then they leave without looking further.

And then they do it again - again, middle of the night, government property, breaking and entering, possible kidnappers/pimps/gentleman of leisure most certainly on that property - just to have sex on a bed that might have been owned by Henry the 8th.

Honestly, nothing after that - especially the mildly anticlimactic resolution to the mystery - could really break down the Wall of Stupid. Even once I reached the rather heart-tugging end of the romance, that Wall still stood behind me like a monument to plot details that don't make sense, and even the best writing in the world couldn't write that action away.

Since the Surrender is still an enjoyable read, all told, because Julie Anne Long is a wonderful writer, but it is most definitely not one of her best. If you are bound and determined to read the entire Pennyroyal series all the way through, this book won't torture you, but there are definitely better books in the series.
B
Posted by AnimeJune at Sunday, December 26, 2010