"What I Did For Love," by Susan Elizabeth Phillips 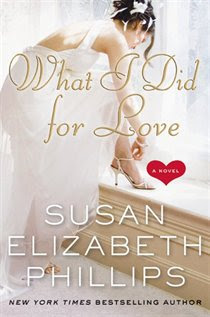 The Chick: Georgie York. Once a famous sitcom star, now she's tabloid fodder thanks to the public combustion of her marriage. She needs to jump-start her career, and fast. The last thing she needs is her picture taken next to her former castmate, Hollywood screwup Bram Shepard.
The Rub: When she and Bram end up date-rape-married in Vegas, she knows a quickie divorce will only tarnish her image even more. Staying married makes better publicity - but what if she falls for Bram for real?
Dream Casting: Isla Fisher.

The Dude: Bramwell Shepard. Bram wants to make a new start in Hollywood, but thanks to his self-destructive partyboy past, he's got no creditability. His accidental marriage to America's Tragic Sweetheart could be just what the doctor ordered.
The Rub: Trouble is, keeping Georgie at arm's length is a full time job - and he's only got room in his life for one.
Dream Casting: Jensen Ackles.

Georgie: My life sucks! My super famous husband dumped me for Angelina Jolie an even more famous woman who happens to love charity work in Asia!

Bram: My life sucks! I've turned my life around and want to make movies again but no one will let me!

Georgie: Crap, now I've gone and fallen in love with you. Later, peeps! *flees to Mexico*

Bram: Oh crap, now I really love you! But how can I prove it? I know! I'll make a really really, ridiculously maudlin art film!

Georgie: I am totally won over by your complete lack of directing skills!

The Word: Eight years ago, Georgie York was America's Sweetheart when she played the goofy, perky Scooter on the popular sitcom Skip & Scooter. Eight years later, while the public still loves her, her main claim to fame is the scandalous dissolution of her marriage when her superstar husband left her for celebrity philanthropist Jade Gentry. Now, with her film career teetering after a series of romantic comedy flops, and the paparazzi stalking her for reaction shots to the news that her ex and Jade are having a baby, Georgie is desperate to do something, anything, to show the public she's more than a romanticized Hollywood victim.

When Georgie heads to Vegas for a little R&R before she embarks on her latest plan (to cultivate a happy, bon vivant image by serial-dating her way through Hollywood's sexy B-list), she runs into her ultimate nemesis, former castmate Bramwell Shepard. The Skip to Georgie's Scooter, he played her gallant, wealthy romantic interest on-screen, but made her life a living hell off-screen - until his irresponsible, hard-drinking, drug-taking partyboy antics ultimately led to Skip and Scooter's cancellation.

However, despite her hatred for Bramwell, when the two accidentally drink cocktails laced with Miraculous Plot Device Roofies, they wake up the next morning in bed - together, naked, and married.

However, after the revulsion and panic wear off, Georgie comes up with a plan. A quickie divorce won't do anything to help her image, and staying married - especially to her Skip & Scooter castmate - might actually create positive buzz and make the general public see her as someone else, someone better, than That Woman Who Was Dumped by People's Sexiest Man Alive. She's even desperate enough to pay him fifty thousand dollars a month to keep up the sham marriage for six months.

Unbeknownst to her, Bramwell Shepard isn't the same addicted fuckup Georgie remembers - not that anyone in Hollywood bothers to notice. He's found his passion in producing the screenplay of a modern literary classic, but no one in Tinseltown's willing to gamble on a man with his reputation and his rights to the screenplay are due to expire soon. Marriage to television's Girl Next Door would go a long way towards clearing his name and getting his film financial backing.

What follows is an engrossing and occasionally frustrating romance between two engrossing and, yes, frustrating and flawed characters. Georgie is clearly the character we're meant to sympathize with early on, as the vast majority of the book takes place from her POV. She's grown up in the spotlight, so much so that she's used to defining herself by the roles she's typically cast in: the loveable quirky almost-pretty screwup. In essence, she wants to recast herself, hoping that by changing her outward image that the public sees, she'll be able to improve her interior self that she's unsatisfied with.

That being said, while she has loads of friends and is respected by casting directors and producers alike as one of the "few truly nice people in Hollywood" - she can be a bit, well, judgy. Think Emma Woodhouse in Prada heels. She makes a lot of judgment calls about the people around her and is only right about them, well - never. And, again like Jane Austen's Emma, when she latches onto an idea about a person it's very hard for her to change it - she bases the stability of her reality on her ability to categorize the people around her. This takes on a particularly frustrating quality in regards to Bram - for the first half of the novel (and some of the second), Georgie is so determined to paint Bram as the bad guy that she ignores the very obvious evidence that he's cleaned up.

To be fair - Bram doesn't make a lot of effort to convince her otherwise. Like a lot of SEP heroes I've read (Dean from Natural Born Charmer, Heath from Match Me If You Can), Bram is a very self-motivated and single-minded character who, thanks to a rough upbringing, believes he has to succeed on his own. While he's accepted responsibility for his involvement in Skip & Scooter's cancellation, he tends to keep people at a distance because he believes the only way to truly fix his life is to do it by himself. Because of this, he intentionally speaks and behaves in a way that reinforces Georgie's bad opinion of him in order to protect his personal life.

And yet, when Georgie's ex-husband drops by unexpectedly, Bram provides a jarring and effective contrast. Bram talks like an asshole and looks like an asshole, but his actual actions are responsible and far-thinking. Georgie's ex, Lance, however, is a consummate charmer who's made a career of putting a positive, selfless, compassionate spin on behaviour that's as petty and selfish and greedy as the next guy's.

That being said, Bram and Georgie's romance develops subtly - almost too subtly, since they spend a vast chunk of their dialogue fighting like cats and dogs, but the growth of affection is definitely there, and it fits the novel's theme that actions mean more than words. By the end of the novel Georgie and Bram's insults and one-liners are the same, but the context and emotions behind them are different.

As well, Susan Elizabeth Phillips' provides a solid cast of secondary characters - including a few people from previous novels (some people from Glitter Baby, and Dean's parents from Natural Born Charmer). None of them turned out exactly as I expected - from Bram's worshipful goth housekeeper Chaz, to Georgie's manager father Paul. Paul surprised me in particular - I thought for sure he would turn out to be one of the novel's villains but SEP is a master at peeling away layers and letting the secondary characters have stories, too.

Furthermore, I felt this time around that SEP did a particularly awesome job with the setting and the background for the story. I loved her descriptions of the people, occupations, and politics of the film industry. By the end of the novel, I actually found myself wishing Skip & Scooter was a real show, because the descriptions the author wove into the story made it sound pretty interesting. Hear that, Ms. Phillips? Pitch that idea to ABC!

Once again, Susan Elizabeth Phillips can't help but impress. I look forward to reading the rest of her titles on my TBR!
A
Posted by AnimeJune at Monday, December 13, 2010