"The Spymaster's Lady," by Joanna Bourne 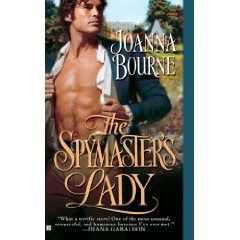 *Spoiler Warning:* Okay, most of my readers know that my reviews come with spoilers but there is a surprise in this book that's very well done - unfortunately, it only lasts until about page 80 so I can't really review this book without spoiling it. If you don't want to be spoiled, in a nutshell: The Books is Awesome and You Should Read It because the Surprise is Fun and the Next 300 pages are, too. If you don't care, read on - but you have been warned.

The Chick: Annique Villiers, a.k.a. "The Fox Cub." A talented spy prodigy from a very young age, Annique has been delivering and keeping secrets for most of her life. Her biggest secret: she holds a copy of Napoleon's secret invasion plans for England.
The Rub: Her biggest problem - Grey, Britain's most dashing spy, knows she has the plans, and is perfectly willing to use whatever seductive methods he can to pry them from her brain.
Dream Casting: Summer Glau.

The Dude: Robert Greyson Montclaire Fordham, a.k.a. "Grey." When he recognizes the infamous Fox Cub in a French prison, he's determined to take her secrets for England - and mete out his revenge for the brave comrades he believes she murdered to get those secrets.
The Rub: As his feelings for her grow, he needs to convince her that his demonstrations of affection aren't just to get her to reveal her plans - although he would really like to have the plans, too, of course.
Dream Casting: Benedict Cumberbatch.

Annique: Yeah, this trapped-in-a-French-prison thing? I'm so over it. You guys with me?

Grey: Sure. *freed* And for your reward, I'm going to capture you and take you to England to interrogate you for the secret plans I know you have, you dirty French whore!

Grey: Don't go! I love you! I mean - I need to interrogate you some more!

"Robert": Do allow me to courteously and selflessly guide you to London for purely altruistic reasons. I do not in any way remind you of Grey, unless any resemblance increases the chance of you having sex with me. BTWi'mtotallyGrey.

Annique: Merde, the sequel: Merd-er. You understand I cannot give you the secret plans, oui? I won't betray my country! I'm Frencher than French! Blue cheese runs in my blood! Gerard Depardieu's nose looks totally normal-sized to me!

Grey: Oh ENFER to the NON.

Grey: Now that you don't have to give me the plans, will you marry me?

1 (Totally Not) Accidental Death of a Parent

1 SexyTimes in a Bathtub

So it comes as a genuinely delightful surprise to enjoy The Spymaster's Lady by Joanna Bourne. I found the woman endlessly helpful and fascinating when I met her (and briefly escaped down eight flights of stairs with her) at RWA 2009, where she won her RITA.

The Spymaster's Lady opens in a French cellar-turned-prison, where Annique Villiers, the infamous spy known as the Fox Cub, is held prisoner by a fellow French spy, Leblanc. She's got serious dirt on Leblanc, enough for him to want her dead - eventually, once he's done with her first. On top of that, she's secretly carrying a copy of Napoleon's Albion plans - a.k.a. Invading England for Dummies - and she can't afford to let Leblanc get his hands on those, either.

It's not long before she decides to make a break for it, but she's not alone in prison. Two English prisoners - one seriously wounded - are chained in the same cellar and she frees them as well. Unbeknownst to her, one of the spies is Grey, the Head of Section for Britain's own spy network who's been looking for both the Albion plans and the Fox Cub he blames for the murder of his men.

Displaying a shocking lack of gratitude, Grey and his sidekicks capture Annique once she's led them to safety. While Annique can't escape, she succeeds in making her transportation across France a monumentally difficult task that very nearly drives poor Grey completely bonkers. Despite himself, he starts empathizing with and admiring her, and his motives for carrying her off to England subtly change.

But he still needs those darn Albion plans.

You know, I've never been totally interested in spy books, contemporary or historical. The closest I came was Almost a Lady by Jane Feather, which bored me into a DNF. However, I found myself totally immersed in The Spymaster's Lady because the primary focus of the narrative isn't so much on the spywork as on the character development thanks to a life of spywork.

Annique, the daughter of French spooks, has been spying nearly as long as she could walk - carrying messages, dressing as a boy, living with gypsies. Grey, meanwhile, started out in the Army and came into spywork late in life. Seeing them interact during both work and play, how they hold themselves, how they communicate with other people, how they react to their growing attachment to each other, brings these differences into play.

And between them, the Albion plans stand as an emotional McGuffin. Where the plans end up is ultimately up to Annique, and yet the prospect of deciding haunts her - if she keeps the plans to herself, France's invasion will go on as planned but will result in the deaths of thousands of innocent English villagers. If she divulges them to England, she'll save lives but at the cost of her own countrymen. Where do her loyalties lie? And how does she decide? At the same time, how can she trust anything Grey does when she always has to measure how much he claims to love her against how badly he needs to know those plans?

I loved Annique as a character. Some of my Twitter friends complained about how she essentially spends about 80% of the book in some form of captivity but she was never a captive character. She's always fighting or plotting, or twisting some form of her impossible situation to her advantage. Let's face it, some situations are just plain impossible - particularly for a nineteen-year-old girl spy surrounded by sexy enemy man-spies. She may not always have the upper hand, but she manages to elevate a few (middle) fingers when she thinks no one's looking.

Grey has a harder time of it, character-wise, but Joanna Bourne manages the very delicate task of making him a dominating character without being exploitative - which seems impossible since he's essentially Annique's jailer for a large chunk of the book, but somehow it works. Yes, he's got Annique captured, but dammit if he doesn't have to watch her every second of every day to make sure she doesn't MacGuyver a castrating implement out of brass buttons and thumb tacks. Girl's high-maintenance, y'all. What he grows to learn in the novel is that he can only control her physical body, and that is far from her most dangerous aspect. The rest of her has to be treated differently.

So yes, some things do live up to the hype - both of the reviewer community and the author's personal presence. The Spymaster's Lady has some of the loveliest writing (particularly when integrating accent and cadence) and one of the strongest heroines I've read this year. I can't wait to get my hands on more of Joanna Bourne's awesome books!
A
Posted by AnimeJune at Monday, December 20, 2010