"Flowers from the Storm," by Laura Kinsale 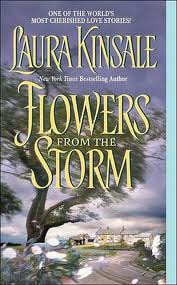 The Chick: Archimedea "Maddy" Timms. When this pious Quaker woman recognizes her father's mathematical partner in a madhouse, she knows he's not as crazy as they think - and that it just might be God's will to help him prove it.
The Rub: How far will she have to go and much will she have to give up to keep Jervaulx from being sent back to the asylum? And how much of what she feels for him is truly God's will?
Dream Casting: Sophia Myles.

The Dude: Christian Richard Nicholas Francis Langland, the Duke of Jervaulx. Once he was the wealthiest, most powerful peer in England - until an incapacitating stroke deprived him of every right and privilege.
The Rub: Maddy Timms seems to be the only person who can understand him, and he'll go to any lengths to make sure she stays with him. Any lengths.
Dream Casting: Aidan Turner.

Maddy's Dad: The Duke of Jervaulx helped me with my math paper! I like him!

Maddy: He's a total skeeze! What are you, crazy?

General Public: Guess what! The duke is dead!

Cousin Edward: Welcome to my lovely mental asylum! Just a few ground rules - no smoking, no sharp objects, and no unexpectedly falling in love with our patients.

Jervaulx: *in head* I'm totally not crazy! Here, let me demonstrate how not crazy I am by grabbing you by the throat while I carve a mathematical equation into the table with a straight razor! See! A crazy person would NEVER do that!

Everyone Else in the Novel: WTF.

Jervaulx's Family: Let's solve this with a hearing!

Jervaulx's Ambiguous Ball-Breaking Aunt: They can't send him back to the asylum if he marries a girl of good family and knocks her up! Even if he IS crazy!

Jervaulx's BFFs: Hey, the duke should totally marry you!

Maddy: YOU ARE ALL CRAZY!

Maddy: Okay, not you. Fine, let's get married. Whatever.

Jervaulx's Family: You married a Quaker? What are you, CRAZY?!

Quakers: You married a venal Duke in an Anglican ceremony? What are you, CRAZY?!

Maddy: I shouldn't care, but I do. He's so sexy and it turns out I like pretty dresses and foot massages and sex. I'll just tough it out...

The Plot: Who ordered the Secret Baby with Extra Angst?

Maddy: I am utterly disarmed and undone by such an eloquent romantic speech! Plus I miss all the footrubs and sex.

The Word: I didn't want to read this book.

I know! Le gasp! But Laura Kinsale is the Awesomest!

Well, there are two fears that contributed to why I hesitated to take Flowers from the Storm off of my TBR:

1. It Wouldn't Live Up to the Hype - I was terrified that the novel touted across Romancelandia as the Best Romance Ever Written Ever couldn't possibly live up to the hyperbolic amounts of lurve and having my Romance Bar raised so impossibly high would result in nothing but catastrophic disappointment.

2. It Would Live Up to the Hype - and thus every romance I read after it would be seem like utter garbage in comparison, preventing me from enjoying another romance novel ever again.

But then I figured, Life is Short. And people are always writing and coming out with new books (including Kinsale herself - which has me all sorts of happy!), so I grit my teeth and took out Flowers from the Storm.

At the beginning of the novel, our protagonists couldn't be more different. The Duke of Jervaulx is a wealthy, lusty, womanizing rakehell who also happens to be a mathematical prodigy. Chaste Quaker Maddy Timms would rather have nothing at all to do with the immoral, "creaturely" Jervaulx, but she's forced to tolerate him thanks to the fact that he's co-authoring a mathematical paper with her father.

The paper earns both men serious acclaim, but Jervaulx has little time to enjoy it - the next morning, as he's about to duel with a husband he's cuckolded, he suffers a stroke. On the way to his townhome with a thank you letter, Maddy hears how the Duke collapsed during a duel and assumes the man is dead.

Months later, however, she learns differently. Having taken a position at her cousin's mental asylum, she is shocked to discover the Duke in the ward reserved for the violent patients, where he's been diagnosed with dementia brought on by immoral living. On their first meeting, Jervaulx snatches Maddy and brings a razor to her throat, only to carve a series of lines and curves upon the table with it. While the duke's keepers see this as just another demonstration of his insanity, Maddy recognizes his carving for what it is - a complex mathematical equation.

Christian Langland, Duke of Jervaulx, has been trapped in his own malfunctioning mind for months. He knows who he is, he knows what his life should be like, but he's helpless to communicate the truth to other people. When people speak to him, all he can hear is gibberish - similarly, when he tries to speak, his mouth can't form the words. The only language his mind can focus on is mathematical - and when Maddy returns to him in secret with the answer to his equation, he surprises them both by speaking his first words since his stroke - "cosine function."

Despite her former disgust for his indecent and immoral behaviour, Maddy knows that Christian is damaged, but not insane. Moreover, the more she learns about the asylum's barbaric "moral therapy," the more she believes that Christian does not belong here, and that perhaps it is her duty - her God-given duty - to help Christian recover and prove his sanity.

If I could name the two elements I love most in great romance, and what I loved most in this romance, they would be Conflict and Drama - both external and internal. Flowers from the Storm delivers it in spades, all of which revolves around the central theme of Control.

Externally, Christian spends the novel fighting to retain control over his legal standing in society, his powers of consent and his authority over his estates, finances, and titles. His avaricious brothers-in-law are all too willing to send him back to the asylum in order to control his wealth for themselves, and unless he can prove his competency, he is powerless over his own destiny.

However, his most difficult battle is the one within himself - psychologically, he's fully intact, but neurologically, his language abilities (reading, writing, speaking, and comprehending) have been severely impaired. Reading about how Christian has to come to grips with his impairment is wrenching - Laura Kinsale powerfully conveys the agony, the rage, the shame of a man born to power who is suddenly denied the ability to speak his own name without hours of practice. Even after he's let out of the asylum, he's still trapped by the limitations of his handicap. My heart broke for him about a dozen times throughout this novel, this man who has every scrap of pride stripped away from him again and again.

And yet, what saves him is his dependence - his dependence on Maddy. Maddy's development operates in reverse - a woman who is accustomed to ceding control who is inspired by God to disagree with and even defy those she would normally obey in order to do what she believes is right. Maddy is a Quaker, and her religion and upbringing are incredibly important to her character - and also a key source of conflict in her relationship with Christian.

And yet taking control leaves her just as confused and uncertain as Christian's sudden loss of control. She's used to being told what to do, to obeying the precepts of her religious elders, to sitting in silence and allowing God to speak to her during the Meetings. While she believes she's been called by God to rescue Christian, her support of him leads her into conflict with a great deal of her upbringing. He's a powerful Duke whose estate spends and controls an enormous amount of capital, something the thrifty, lower-class Maddy has no idea how to deal with. As a result, she can sometimes come across as wishy-washy, because she's a naturally passive person who's more comfortable ceding to someone else's authority than enforcing her own.

More points go to Laura Kinsale for portraying neither lifestyle as the "better" one - Maddy does help Christian improve himself as a man, but she doesn't "cure" Christian of the ills of profligate spending and luxurious dress and convert him to the ways of Quakerism. Similarly, Maddy doesn't suddenly open her eyes and discover that Quakers are repressive cultists and that her greatest dream is to wear low-cut gowns hand-sewn by blind Catholic nuns or some such nonsense. Christian is still an aristocrat, and Maddy's Quaker upbringing remains in her life - and that conflict remains even by the end of the novel. It just isn't enough of a conflict to impede their love for each other.

And what a love it is. This book will wring you emotionally dry - these two protagonists are defined as much by their flaws as by their strengths, and those flaws are not "fixed" by the end of the novel. You will be frustrated and angry and despairing while reading this book - I realize that up until now my review may sound very objective and unemotional, but this is a book you will tear through at a frantic clip. These characters have to suffer a great deal before they get to the end - and Laura Kinsale will ensure you suffer right along with them. In the good way, honest.

Okay, if I had to brutally honest - Flowers from the Storm doesn't topple Prince of Midnight from its pedestal as my favourite Kinsale, but it's still a profoundly emotional, epic character-driven romance.A+
Posted by AnimeJune at Saturday, January 08, 2011