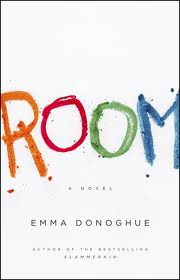 *Spoiler Warning* I will be talking about stuff that, while it's a major part of the narrative, happens about half-way through the book. Room's a pretty good read, I'd recommend it, but here be spoilers. You've been warned.*

The Hero: Jack. He loves his Ma, he loves his Fort made out of vitamin bottles, he loves Dora the Explorer, and he loves the Room where he and his Ma live. So why is his Ma so unhappy all the time?
The Rub: His Ma has been stuck in Room for a long, long time and has wanted to leave it longer than Jack's been alive - but is Jack ready to accept the existence of a world outside room?

Ma: Jack's mother, who was kidnapped as a student by Old Nick and held captive in a technologically-enhanced garden shed for seven years. Has tried to make as normal a life as possible for her son.

Grandma: Ma's mother, who helps look after Jack after the escape from Room.

Steppa: Ma's stepdad, and an awesome grandad to Jack. Smells like pot. Keeps it real.

Dr. Gray: Ma and Jack's doctor, who helps them adjust to outside of Room. A closet Poetry Major.

Old Nick: Someone who deserves to die in a prison fire - i.e. the psychotic rapist who captured and held Ma and Nick in a shed for seven years.

The Word: Chalk this read up to my Nana, who gave me this book for Christmas. She's made it a tradition to give highly-reviewed books for Christmas - some have been hits, and some have been misses, but after reading all the reviews on the blogs, I was pretty excited to read this one, despite the fact that I was a bit nervous about the dark subject material.

However, the darkness of the material is well-controlled by the author's clever use of perspectives and pacing.

The entire novel is told from the first-person point of view of Jack, a five-year-old boy who lives in Room with his Ma. He runs Track everyday, skidding from one wall of Room to the other while his mother counts. He watches TV (especially Dora the Explorer), and plays with his toys - his Fort made of vitamin bottles, his Labyrinth made of toilet-paper tubes, and his Eggsnake made out of eggshells and string. He reads and is read to. He loves Room, and his loves Ma, but he's not a huge fan of Old Nick, who comes and visits Ma in the night while Jack hides in Wardrobe.

Room is neatly divided into four parts, and the first part of the novel relies almost entirely on dramatic irony and unconventional perspectives. Jack is happy and content in his world - it's the way it is because it's the way it is. However, the reader is able to understand the context of the situation in a way the very young narrator can't: the fact that Ma and Jack are trapped in an 11 by 11 foot garden shed by a sociopathic rapist called "Old Nick." Jack tells the reader everything that goes on in his room, things that are harmless and normal enough to him, but unwittingly shows us the horrific truth - for instance, the scenes where Jack has to hide in Wardrobe and count the creaks Old Nick makes on the bed with Ma, or his off-the-cuff descriptions of Ma's "bad wrist" and "rotted teeth," or the days where she simply lies in bed all day, acting "Gone."

However, Jack's world is about to change. In the novel's second part, Old Nick's been laid off, which means Ma and Jack have to find a way to escape Room - but this, of course, means convincing Jack that things do exist outside of Room and that things like ice cream and trucks and LEGOs - things he used to believe were "only on TV" - are real. Convincing Jack that the world outside of Room is a better place is an even bigger challenge.

The differences in perspective are the foundation of the novel's conflict and story. Ma's heroic and selfless attempts to create a semblance of normal life in Room helped preserve Jack from the true horrors of their situation. But Jack's Room is not the same as Ma's Room - something that grows even more apparent in the novel's third part, after they escape and learn to adjust to the world outside. The outside world frightens Jack, and he wants to go back to Room - it's where he feels safe, it's where the world behaves as it should. Adjusting his perspective is a constant struggle, particularly when no one on the outside (even his Ma) appears willing to understand his longing for Room.

Room works on such an emotional level because the reader understands both perspectives - I winced every time Jack wailed about staying in or going back to Room, because I sympathized with his plight but I also understood what staying or going back to Room would mean for Ma. Even though she's depicted completely through the eyes of her son, Ma is just as compelling a character as Jack - perhaps even more so because her development is only shown, and never told. We figure it out for ourselves because Jack's unable to understand the context of a nineteen-year-old girl taken from everything she knows only to return seven years later to find a world that's changed without her.

Jack's perspective acts both as a strength and a hindrance of the novel. His perspective is realistically imaginative and illogical - if things don't exist in Room, then they don't exist at all. I totally understood this. I remember a time when I was in kindergarten, and one of my classmates showed a picture of himself as a ring bearer at his mother's wedding for Show and Tell. I stood up and shouted, "That's impossible! Kids aren't alive yet before their mothers' weddings!" Everyone in my limited five-year-old experience had been born after, therefore nothing different could possibly exist.

At the same time, though, Jack's POV makes Room a slower read. Five-year-olds are fun to listen to - for about fifteen minutes. So how about an entire story made up of five-year-old ramblings? It's not that it wasn't interesting or coherent, but Jack's trains of thought are so tangled up in memories and explanations and TV references and off-the-wall descriptions that it takes a while to sort through it all.

As well, there was one other sour note - I thought the descriptions of the media treatment of Jack and Ma's escape to be cartoonish and exaggerated. Clearly, the media was meant to be depicted as invasive and and melodramatic, willing to depict a gruesome crime as even more gruesome to get more viewers, but in a book where every other detail seemed thought-out and realistic and an organic development of the story, the media coverage stood out like a concrete light pole in the middle of a forest - it was There To Prove A Point. It seemed false and contrived, but thankfully we don't get too much of it.

Yes, there is a lot of darkness in Room, even after they escape. However, it's balanced out with a lot of love and heroism and great characters. While Room contains rape and captivity and severe limitations, it is ultimately a story about the love between mother and child and how it can preserve innocence and intelligence even in the midst of great adversity.
B+
Posted by AnimeJune at Sunday, January 16, 2011

Labels: B Plus Reviews, contemporary, fiction