"Lord of Legends," by Susan Krinard 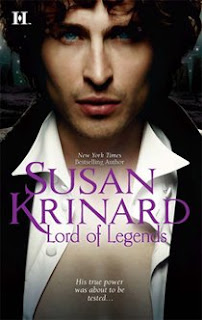 The Chick: Mariah Ware, Countess of Donnington. When she discovers a crazed man trapped in a cage on her husband's property, she knows she has to help him escape and regain his former life.
The Rub: With rumours already swirling about her supposed infidelity, hanging around with a man who considers clothing entirely optional isn't the wisest course of action.
Dream Casting: Kelly Macdonald.

The Dude: Arion, a.k.a. "Ashton Cornell." A unicorn king banished from his homeland and turned into a human by an evil fairy prince, the only chance he has of regaining his old life is to find the Prince's intended bride, Mariah Ware, and seduce her into the fairy world.
The Rub: The only caveat? Arion must leave Mariah Ware a virgin, or else he'll remain a mortal human.
Dream Casting: Alexander Skarsgard.

Mariah: Wow! A sexy dude in a cage, and it's not even Ladies Night!

Arion, King of the Unicorns: Virgin. HAWT. But my horn is gone - not so hawt.

Evil Fairy King: Want your horn back? It's easy - just get this Mariah girl to walk through my gate by seducing her mind, body, and soul.

Arion: That doesn't sound so ba--

Evil Fairy King: Oh but if you have sex with her you'll never be a unicorn again.

Arion: That is so completely the opposite of hawt. And amazingly counterproductive.

Vivian, Evil Mother In Law: You're an American girl, and thus obviously a whore. Someone's sticking it to you, and I'm going to find out who. Hey, neighbour whom I find Completely Trustworthy who is Totally Not a Crazy Vicious Sex Addict - go and do random evil!

Mariah: While it's lovely that the Prince of Wales invited us to his house, we are surrounded by completely evil adulterous fornicators. Keeping my nose up in the air all the time is making my neck hurt!

Arion: Wow, your judgmental prudery is so HAWT. Too bad we can't have sex!

Arion: Because you're married.

Mariah: Oh, well - well it's different with us!

Evil Fairy King: You get the unicorn, I get the girl!

A Bunch of Characters: *get shot*

Arion: Here, I will give up my horn to save you, Mariah!

Mariah: Why would you do such a thing?

Arion: Because I don't need the horn on my head. I have something more important.

Arion: The horn in my pants.

1 King of the Unicorns

The Word: When I got a copy of Lord of Legends at RWA, I have to admit I was more than a little interested in the novel idea of a hero who is a unicorn. However, even as I picked up the book, I steeled myself for silliness and easy "horn" jokes.

What I got instead, however, was a lazily-written hypocritical morality tale with some of the worst female characters I have ever read.

First, we have our heroine, Mariah - a Pure Virgin (tm) American Heiress. She married a mysterious English earl who vanished on their wedding night before he could do the deed, and two months later he hasn't returned and her Mother-In-Law's Annulment Trigger Finger is gettin' mighty itchy.

Mariah battles her depression with aimless wandering, which brings her to a folly at the edge of her husband's estate. To Mariah's shock, she discovers a cage inside the folly - a cage containing a gorgeous, mysterious naked dude who looks exactly like her husband, only with white hair and black eyes (yes, ignore the completely incongruous cover art). Since her mother spent some time in an asylum (don't ask), Mariah knows Everything About Crazy People, and decides to put her instinctive Man Whisperer skills to use and see if this strange person (whom she names Ash) can remember anything about his previous life.

Ash's bout of Convenient Amnesia swiftly evaporates and he remembers everything: he's actually Arion, the King of the Unicorns, exiled from the fairy otherworld (called Tir-na-Nog) and turned into a human by an evil fairy prince in league with Mariah's husband, the Earl of Donnington. The Evil Fairy Prince senses Mariah has some Fairy blood in her ancestry and wants to make her his bride, and in return for securing her, Donnington gets to hunt the most dangerous game - unicorn.

Yeah - this dude wants to trade his wife for a chance at big game hunting. Seriously. Dude might as well wear a name tag that says, "Hello, I'm the Earl of Donnington and I have a Ridiculously Small Penis."

However, the Evil Fairy Prince isn't taking any chances - he approaches Ash as well, promising to return him to his unicorn form if he helps seduce Mariah into crossing the Gate between worlds, stating that as a Pure Virgin (tm), Mariah won't be able to resist Ash's Mighty Unicorn Presence. However, since Ye Olde Double Standards are as real in Tir-na-Nog as they are in Victorian England, the Evil Fairy Prince tells Ash that she must remain a Pure Virgin (tm). Any poking, and Ash will remain a human forever.

Exhibit A? The Evil Vagina - I mean, Lady Westlake, but I might as well call her the Evil Vagina because that's pretty much the entire summation of her character - she's Evil. Because she uses her Vagina. A lot. For eeeeeeeevil. Her Evil Vagina is both her motivation and her tool: desperate to bang the Earl of Donnington, she'll gladly use her body to lead good (Mariah's brother-in-law Sinjin) and less-good (Random Adulterer Dude) men astray by having awesome sex with them if it means it will achieve her goals.

And she's actually pretty good at workin' that Evil Vagina - she scores the L-Word from Sinjin within the span of a few weeks and wins Random Adulterer Dude from his mistress with a single against-the-wall encounter wearing wigs and makeup to disguise themselves as Mariah and Ash (for reals). She almost gets Ash, too, with the Whoops-I-Forgot-To-Wear-Clothes-Under-My-Trenchcoat Act.

But I digress - now we have Exhibit B: the Good Vagina, er, I mean Mariah. She starts out harmless enough - a bit drippy and naive, perhaps, but not wholly bad. All that changes once Ash and Mariah wind up at a house party hosted by Bertie, the Prince of Wales. Yeah. Unicorns. Princes. You've already been sniffing the glue for 190-something pages, you might as well throw some glitter in it and keep going.

Anyhoo, Mariah is shocked (shocked, I say!) to discover that some of the people at the house party are having affairs with people who are not their spouses. Here we learn what it means to be a Pure Virgin (tm) - it's not enough that Mariah abstains from sex because she is married. No, we learn she's also an insufferably judgmental shrew who openly condemns people for things that are none of her business. For one cannot be a Pure Virgin (tm) and simply think that adultery is bad - one must also hate adulterers and treat them worse than Regular People.

For instance, Mariah refuses to dance with any man at a ball if he's trailed by rumours of adultery. Page 251, her thoughts: "The adulterers. The ones she had determined to despise..." Never mind that they're your hosts and fellow guests. Never mind that they've been nothing but civil to you. They should all be branded with scarlet F's for Fornicators and wear sackcloth and ashes! If Mariah ever turned up in an Eloisa James novel, she'd be chased out with torches and pitchforks.

But of course she's in love with Ash - a man who isn't her husband. I thought there might be a ripe opportunity here for Mariah's own romantic conflict to allow her to discover shades of grey and perhaps judge her fellow guests less harshly, and be more willing to see the good in people... No dice. All other adulterers are whores for sleeping with other men. Mariah, on the other hand, is in love with a unicorn, and her husband is a jerk, so she doesn't count. I guess.

Amazingly, the message comes across as both ham-handed and confused. Having sex a lot makes you evil - except if you really really want to have sex and your lover is a unicorn and your husband wants to mount his head on his wall while selling you to an Evil Fairy Prince?

And in all of this long-ass review, I haven't even mentioned Arion the Magical Unicorn Dude, but yes, he's just that uninteresting. He gets a few chapters where he refuses to wear stockings and flips out over the fact that his penis is now about 9 inches shorter than it should be, and then suddenly he reads a few books and becomes eloquent enough to become the Prince of Wales' best friend. I really don't understand how his character was made more significant by being a unicorn since it didn't affect his grasp of human behaviour. Oh - it makes him more primal and dominant and predatory? Well gee - I have *never* read a romance hero described with those adjectives before!

To top it all off, the writing and worldbuilding are lazy. The descriptions of Tir-Na-Nog are twee, unoriginal and cutesy, flowers and fairies and Disney animation. Most of the descriptions of the fairies and their world is "like ours, only better." For example, the villain's hair is described as "a colour only a blind man would have called brown" and "far more resplendant than anything that could be called 'brown'". Soooo.... it's REALLY BROWN?

When all is said and done, Lord of Legends - when it's not prissily moralizing about Teh Evils of Sex (With Anyone But a Unicorn), it's boring you with uninspired worldbuilding, wildly inconsistent characters, and vague writing. Want to read a truly beautiful, witty, heart-tugging romance involving a unicorn? Pick up Peter S. Beagle instead.
D