"Tumbling Through Time," by Gwyn Cready 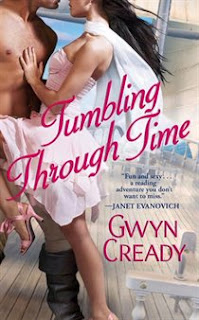 The Chick: Persephone "Seph" Pyle. When a magical pair of high-heeled shoes sends her back in time to meet and help the main character of her theoretical first romance novel, it's not exactly the dream-came-true she thought it would be.
The Rub: Even as she starts to develop feelings for her character, Drum, she also realizes she's always had feelings for the real-life man she based Drum on, Tom Fraser.Dream Casting: Maggie Gyllenhaal.

The Dude: Tom Fraser. Seph's best friend, they shared an almost-torrid affair on top of a recycling bin until she called it off. Inexplicably, he still carries a torch for her.
The Rub: Trouble is, he's about to leave the company for a cushy position in Paris, working with a terribly fashionable and attractive female partner.Dream Casting: Colin Firth (per the author's express instructions.)

The Other Dude: George Drummond, a.k.a. "Phillip," a.k.a. "Drum." He was just living a normal life circa 1706, until some crazy 21st century author took over his life, populating his ship with anachronistic characters - one of whom steals some incredibly sensitive war documents that Drum was supposed to be guarding.
The Rub: He needs this author to come to his time and fix this mess she's created - but what if he falls in love with her? And isn't that bizarrely incestuous in some way?Dream Casting: Also Colin Firth (aaaaaawkward).

The Plot: No plot this time. Too crazy. Read the review!
Romance Convention Checklist

The Word: *We are in a stark, white room, furnished only with a single table and two folding metal chairs - one of which is occupied by Dr. AnimeJune, Novel Psychologist. The door opens, and two handsome, tall, but charmingly Beta orderlies drag in Tumbling Through Time. She is tightly laced into a straightjacket, but that barely slows her struggles.*

Tumbling: You don't understand. You've made a mistake!

*the orderlies pay no attention and forcibly seat in her in the chair opposite Dr. AnimeJune.*

Dr. AnimeJune: *crossing her legs, the better to show off her fabulous candy-apple red heels* Tumbling, do you know why you're here?

Tumbling: I know why you think I should be here. You think I'm crazy. I'm not crazy. I'm not. Okay, so I'm not Keeper Shelf material. I get it. There's no need for restraints.

Dr. AnimeJune: Well, why don't we go through a few questions and see how things progress from there. *flips through chart* Let's see - you're a contemporary romance with a bit of an historical paranormal twist, am I right?

Dr. AnimeJune: You have a hero who happens to "look" like Colin Firth.

Tumbling: Correction - I have two heroes who happen to look like Colin Firth. It's like Bridget Jones' Diary, but with no Hugh Grant and twice the Firth! You'd be crazy if you didn't want two Colin Firths, am I right? Wait - what are you writing?

Dr. AnimeJune: *scrawls Lacklustre description of heroes into her notebook* Oh, nothing. What's your story, exactly?

Tumbling: Well, I have this heroine, see? Seph Pyle. She works for a pharmaceutical company. She's very buttoned up. Uptight. She's very uncertain about relationships - except for a special friendship she shares with a coworker, Tom Fraser, a friendship that continues even after she let him feel up her boobies only to call it off at the last minute.

Dr. AnimeJune: He's the guy who looks like Colin Firth?

Tumbling: One of the guys, yes. So you see, you should really be locking up Seph Pyle. She said no to Colin Firth! *nervous giggle*

Tumbling: No, thinking of it. Anyway, while on route to a conference in Venice --

Tumbling: Why NOT Venice? Seph comes across a Nine West in an airport that has a fabulous pair of shoes. Magical shoes. *jazz hands* That are magically just her size and make her feel like she's walking on baby ducks.

Dr. AnimeJune: Made of rubies, I presume? Or silver?

Tumbling: Once Seph puts on the shoes, she finds herself magically transported onto a ship in 1706. There, she finds herself captured by the handsome, Colin Firth-esque captain, Phillip Drummond. He's the unwitting hero of her very own romance novel, and being stuck in her story has ruined his life! For instance, there are "romantic" full moons every night, and his ship somehow has walls instead of bulkheads, and his favourite table has a cannon in it since for some reason Seph thought that would be a great idea. Seph clearly hasn't done enough historical research! Hahaha! Isn't that just whimsical and clever?

Dr. AnimeJune: But you said Seph hadn't written her book yet. Not even an outline.

Tumbling: No, she only thought about it. Yearned about it.

Dr. AnimeJune: So she's in a book?

Tumbling: No, no. She's in the past! The actual past! The sexy Master and Commander past, only instead of chubby Russell Crow, we have dashing Colin Firth.

Dr. AnimeJune: Your heroine changed the past with her mind?

Tumbling: *pales* I didn't say that.

Dr. AnimeJune: Yes you did. Somehow, without writing anything down or even doing an outline, your heroine affected the moon's rotation and the architecture of a ship just with the power of her thoughts. *checks notebook* Moreover, when she finds a way to return to her own time, she discovers Phillip Drummond's ship (which she "unwittingly" named after a shoe store) actually exists in historical records, demonstrating her ability to completely alter the course of human history without any conscious thought or effort on her part. Did you intentionally make your heroine a superhuman, omniscient being?

Tumbling: No! It's not like that at all! It's just irreverent, sparkling comedy! It's not anything serious. It's MAGIC! *jazz hands*

Dr. AnimeJune: Mmm-hmmm. *writes Plot makes no damn sense in notebook* So Drum looks like Colin Firth - which means he looks like Tom?

Tumbling: Of course. He's the hero of her novel. Her romantic ideal. Isn't that sweet? Unfortunately, one of her other creations --

Dr. AnimeJune: Which she hasn't actually written yet.

Tumbling: Ahem. One of her other characters found their way onto Drum's ship and stole important papers for the war that he was supposed to be guarding. So, with some help, Drum transported Seph to the past to see if he could get her to bring those papers back and save his sexy Navy bacon.

Tumbling: A Gypsy. Who has magic. *jazz hands* She magically transported the magically fabulous shoes to the present day and gave Drum some pieces of the same fabric.

Dr. AnimeJune: Why? Why would this Gypsy do this?

Dr. AnimeJune: Because why? *flips through notebook* I've read you end to end and not once is this magical Plot Device character or her motives ever explained. She literally just shows up, blathers on about how only The One For Seph is capable of physically taking off the Magic Shoes and curing her spontaneous time-travelling, and then she scurries away like a rat, never to be seen again.

Tumbling: Because it's magic! *jazz hands* Whimsy and mystery and sparkling, irreverent wit!

Dr. AnimeJune: Really? It's irreverent that whenever Seph zips back to the present, she discovers that while she was in 1706, being forced to trade inadequate handjobs to sexually-repressed Admirals for information, her body in 2010 was possessed by a strange entity (again - never explained) who gave her tattoos - one of which was on her boob - and tried to have sex with a bunch of people without her consent?

Tumbling: It's bubbly because it happened even though it's impossible! It's magic! *jazz hands*

Dr. AnimeJune: *exasperated sigh* Listen. You're not hopeless - you have a very nice comedy voice. Well suited for light, breezy contemporaries. And the main hero, Tom, is quite a decent chap. Heroic, even. But the fact remains that the basic story runs on sheer comedy value without any structure, rules, logic, or worldbuilding to back it up.

You don't explain or ground anything. We never learn who was controlling Seph while she was on autopilot in 1706. We never learn why the gypsy gave her the shoes in the first place or why George Drummond looks like Tom, and therefore also Colin Firth, since he is inexplicably both an real and a fictional character.

Even fantasy novels with magical, all-powerful characters have established rules and boundaries because that gives the story structure and allows the reader to experience suspense. If your heroine had, say, actually written a manuscript and discovered some random Plot Device person or object that allowed her to enter the book, that might have been fine.

Instead, you don't outline her capabilities or weaknesses at all because she hasn't written anything solid yet - and so you unwittingly establish Seph as some astoundingly oblivious super-being who can literally conjure Colin Firths out of the air. How is this power controlled? Where did she get it? Do all her brain storms spin off into alternate realities? Will Tom end up in the cornfield if he forgets their anniversary? And how come she never uses this power - like, whenever they're in a naval battle, why doesn't she just concentrate really hard on a story she should write about an enemy ship that sinks when you throw marshmellows at it?

I mean, otherwise, this book reads like an incredibly imaginative and elaborate excuse to have a woman make out with Hot Historical Darcy Firth and Witty Contemporary Love Actually Firth at the same time.

Tumbling: ...Okay. That makes me mildly obsessed - and a haphazard and incredibly silly novel - but certainly not crazy.

Dr. AnimeJune: You know what? You're right. That doesn't make you crazy.

Dr. AnimeJune: I mean, it's not like your heroine at the end of the book doesn't have the Hero remove the magical shoes, as the Gypsy foretold.

Dr. AnimeJune: I mean, because you obviously realize that your entire story was built around the fact that Seph's incapable of removing the shoes without help from her Soulmate (tm), and that despite how nice they feel, she has to shower and jog and clean floors in heels unless she finds The One. Since you're not crazy, clearly your heroine has a scene at the end where she has her hero untie the shoe ribbons and release her feet from pink taffeta bondage.

Dr. AnimeJune: She decides it's "HEALTHIER" not to "TEST" the man she ends up with, with an "ARBITRARY" magical phenomenon.

Tumbling: No! You don't understand!

Dr. AnimeJune: My decision is final - your story is mind-bogglingly nonsensical, your tone shifts inconsistently from inane and bubbly to graphically violent, you do not finish any plot threads you start, and YOUR HEROINE CHOOSES TO HAVE PINK SHOES WELDED TO HER ARCHES BECAUSE SHE'S THAT DESPERATE FOR A MAN. Take her to solitary, boys!