"The Duff," By Kody Keplinger 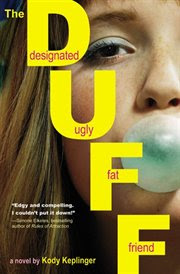 The Protagonist: Bianca Piper. When a crass classmate calls her "The Duff" (the Designated Ugly Fat Friend) of her group of friends, she's forced to re-evaluate how she and other people view herself.
The Rub: When this assessment comes right before the collapse of her parents' marriage, Bianca turns to that same crass classmate, Wesley Rush, for physical comfort, and discovers he's also more than he seems.

Casey: Bianca's BFF from early childhood. Also kind of weirdly possessive about who Bianca may or may not be dating.

Jessica: Bianca's other BFF, whom Casey and Bianca rescued from being enslaved by evil cheerleaders.

Toby Tucker: An erudite, soft-spoken nerd whom Bianca has a crush on.

1 Nerdy Romantic Rival
The Word: The book was a little hard to get into because the main character and her Obvious Love Interest are pretty much entirely unlikeable for the first half of the novel. Bianca, when we first meet her, is a prickly little sourpuss who resents having to squire her bubblier, happier, boobier and prettier friends around town.

One night, while she is determinedly not enjoying herself at a dance club, Wesley Rush, the school's resident Rich Popular Horndog, attempts to chat her up. In fact, he's only being nice to her because he thinks that showing kindness to the least attractive member of a group of pretty girls (i.e. The Duff - the Designated Ugly Fat Friend) is the quickest way to get into the prettier friends' prettier, thinner pants.

Of course, because either a) Wesley is an absolute fucking moron or b) we need an Inciting Incident to start the plot as well as name the book, Wesley tells Bianca all of this to her face, and then acts all surprised when an insulted Bianca not only refuses to guide his dick into her friends' jeans, but throws a drink in his face as well.

Of course, the name sticks, and all of Bianca's nameless insecurities comfortably slide under the Duff umbrella and she starts wondering if she's just the pessimistic third wheel to her boobtacular friends. It doesn't help that Wesley starts calling her "Duffy" whenever they cross paths. And, to not help things even MORE, when Bianca's Parental Drama gets the best of her, she starts having sex with Wesley because that experience is slightly less unpleasant than dealing with her mother's flighty cowardice and her father's impending return to alcoholism.

I tried to sympathize with Bianca, but for the first half of the novel she's such a bitter, cynical pill who just makes ridiculous snap judgments about everyone. For instance, she contemptibly calls the cheerleaders The Skinny Squad, despite the fact that her best friend is a cheerleader and none of the cheerleaders are particularly mean to her. Wesley is just as bad, a cartoonishly insensitive boor we're supposed to eventually identify with once we realize he has Poor Little Rich Boy syndrome, a nasty grandma, and has no dude friends except That One Gay Guy because he's incapable of not stealing their girlfriends.

And their fights aren't really very snappy. None of this witty, quickfire His Girl Friday banter - just Bianca lobbing low-blow insults at Wesley right before (and often right after) they have sex, with Wesley smirking and saying, "See you next week."

What I'm saying is that the "romance" element of this novel kind of stinks, and has a pretty easy resolution at the end - much like the far bigger problem of Bianca's father's alcoholism, which takes a surprisingly dark and vicious turn only to be glossed over under the Happy Ending Umbrella. The writing is simplistic - this was really the kind of book I was hoping to avoid when getting into YA because this was what I assumed most YA was like before Jennifer Echols and Suzanne Collins changed my life.

The novel has some bright spots - most of the scenes with Bianca and her friends, actually. While her friends are sort of portrayed as bubbleheads at the start, over the course of the book we learn the actual origins and politics of their friendship, so that it's not as simple as Wesley makes it out to be. It's not the Plainer Smart Friend paired with the Boobier Blonder Dumb Friends. More like the pessimist who's friends with a pair of optimists, they play off and complement each other. It's the strongest element of the novel, and one that kept me reading.

That being said, the rest of the book talks a big game but fails to play up to it. I'm sorry to say it, but in my pile of YA fiction, this book is pretty much the Duff.
C+.
Posted by AnimeJune at Friday, December 02, 2011