"A Lady Awakened," by Cecilia Grant 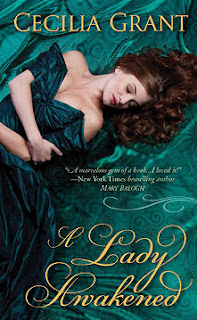 The Chick: Martha Russell. When her husband dies, she's left with nothing but an estate that will go to her despicable brother-in-law - unless she can produce an heir within the next nine months.
The Rub: Since her husband didn't do the job himself, she'll have to find someone who can, and the newly-arrived Theo seems as good a stud as any.
Dream Casting: Sophia Myles.

The Dude: Theophilus Mirkwood. A profligate rascal banished to the countryside to mend his ways, he'll have to prove his worth to his tenants and his father's steward if he wants to return to his high-flying ways in London.
The Rub: Associating with the forward-thinking, well-respected widow Russell does wonders for his reputation - and that's not even mentioning the 500 pounds she's paying him for sex!
Dream Casting: A younger Brad Pitt.

The Plot:Martha: I need a baby!

Theo: I need a project!

Martha: Hey hey hey! I'm not paying you for orgasms!

Martha: You heard me. Babies only. None of that flimsy fun stuff.

Theo: Oh yeah, they'll be much better off - and less water damage to the structure.

Theo: You like that, don't you? Improved living circumstances to the economically disadvantaged.

Theo: And I'm going to build a dairy.

Martha: You BUILD that dairy!

Theo: And create a higher-quality product for a lower cost, creating an economic stimulus.

Theo: I'm getting all RESPONSIBLE LANDOWNER up in here!

500 Pounds on the Dresser

The Word: Unless I come across a miraculous page-turner within the next sixteen days, this book is the best book I've read all year.

The author kindly offered me an ARC, and I accepted - but when the book arrived I kind of put it on my shelf and forgot about it.

Mea culpa. This is just one of those lovely, slow-burning, intricately written stories that manages to avoid NEARLY EVERY BURNING CLICHE I ABSOLUTELY DESPISE about historical romances.

Martha Russell needs a baby. Her husband is recently deceased, her brightest prospect is a position as a dependent in her brother's household, and Mr. Russell's entire estate will go to a slimeball of a brother with a vicious sexual reputation - unless Martha can convince people that Hubby Dearest took the time to pop a legitimate bun in her oven before riding out to break his neck.

Opportunity strikes when Theophilus Mirkwood arrives in town - an impossibly charming and promiscuous wastrel who has been stripped of his allowance and banished to the countryside by his father in order to mend his ways. He is shocked when the very prim Mrs. Russell very politely offers him 500 pounds to copulate with her once a day, every day, for a month - with the promise of 1500 more if their arrangement results in a boy she can pass off as Mr. Russell's posthumous heir.

Theo, who considers himself a thoughtful, thorough, and experienced lover (don't they all, though?), is even more shocked, however, at Martha's intentional and determined refusal to experience pleasure during the act, despite Theo's absolute best efforts. She'll have her cake, thank you, but she doesn't care to eat it, too.

Now, before you start thinking, Oh, she's one of *those* historical heroines. Another orgasmless widow? - keep reading. Martha is an exceptional, sensational, deeply moral, and uniquely wonderful character. She's a hen's tooth of an historical heroine who knows first hand about pleasure (if you catch my drift), but she's also witnessed the exploitation of women at the hands of men (both with her mother and her draining parade of pregnancies, and in the female tenants and servants she's responsible for). This knowledge has left her pathologically opposed to dependence of any kind.

For Theo, taking his pleasure without giving his partner any goes severely against his personal Rake Code, so when his many attempts to seduce her fail, he tries to please her in other ways - by talking to her, asking for her expertise and guidance on tending his estate, and studying ways to improve the lives of his tenants. To his surprise, not only does this work, but he starts enjoying it as well.

And oh, the protagonists. I loved them both equally, their idiosyncrasies and fears and motivations, and I love the fact that Cecilia Grant manages to create such wonderful characters without giving them some traumatizing or ridiculously momentous backstories to explain the way they act. Not that I don't like dramatic backstories, but it's refreshing to realize that one doesn't need to witness their parents die in a flaming carriage accident to become an interesting, flawed character.

Martha is a magnificent Swiss watch of a woman, precise, rigidly practical, controlled and well-ordered, with a strong sense of righteousness that sometimes goes a wee bit too far (honestly, deciding to provide a fake heir to jilt a guy based on sixteen-year-old rumours is the flimsiest part of the novel). However, as a result, she has severe social blind spots and is rather isolated from her community. But I adored her. She's strong and she's independent and aside from one iffy motivation ("this person allegedly raped an unknown woman sixteen years ago according to hearsay? I can't let him have his birthright!") she is a damn smart woman who knows how to survive in her environment.

Theo, meanwhile.... Mmmmm, Theo. He's a spoiled, lazy, charming, cheerful, thoroughly enjoyable rake who, even at the tender age of twenty-six, is starting to tire of no one taking him seriously or expecting much from him. Really, the only thing he's practiced or improved upon in his life is his skill at giving ladies Sexy HappyTimes, and Martha won't even let him do that. But as he tries getting her involved in his estate management in an effort to impress her, he starts making a difference and taking initiative, and finding something that he's actually good at. Reading how Theo grows up is just as wonderful as watching Martha loosen up.

What I love about the romance itself is that it develops almost entirely separate from sex. They knock boots within the first couple of chapters, and quickly establish that it's a businesslike arrangement between them (and is written as such). Almost all of their important interactions happen after sex, after the "duty" is fulfilled and they can relax enough to talk to each other.

The sex only becomes an act of pleasure after they fall in love with each other. Theo doesn't one day try some mysterious Far Eastern sex move and Martha doesn't magically discover her g-spot for the first time. Martha herself sets the perimeters of her sexual enjoyment - she doesn't want to surrender herself, sexually, to a man she doesn't admire and respect. And, without spoiling too much, she never does.
Thought-provoking, gorgeously written, flawlessly characterized, A Lady Awakened is a breathtaking debut from Cecilia Grant, who with her first book, proves herself worthy of the same bookshelf as Laura Kinsale, Mary Balogh, Sherry Thomas, Carolyn Jewel, Jo Goodman, and Judith Ivory.A+
Posted by AnimeJune at Thursday, December 15, 2011